Gwang Nam again avoids getting discovered at Hee Ok's hote. Also, when he finds out that Ha Ru is working with So Ri he gets angry and slaps him. 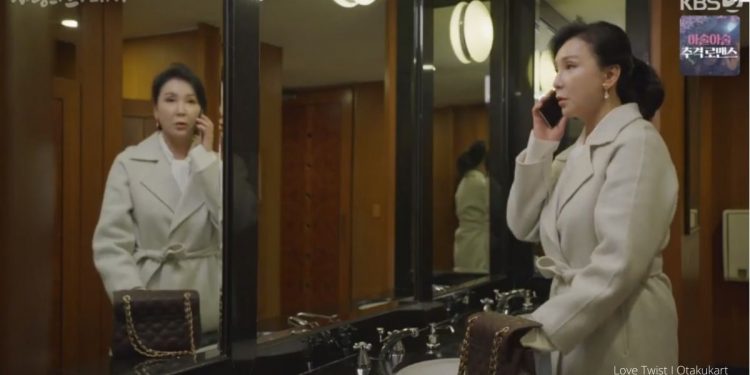 Not learning his lesson the first time, Gwang Nam again goes to the hotel to visit Hee Ok. As he enters the hotel he is very conscious of not getting discovered by anyone. So when he gets a call from Ok Hee he lies to her about where he is. His actions are hurting his wife but she decides to focus on the good part and visits Hee Ok again. The timing clashes again and Gwang Nam struggles to flee from the scene. Also, in ‘Love Twist’ episode 11 Gwang Nam confronts Ha Ru about being involved with his daughter.

Ha Ru is very stressed about his move to the U.S. Also, he is not sure if he really wants to leave So Ri. When he finds out about Yoon-ah’s plan to leave for Silicon Valley with him he becomes furious and asks her to stay away from him. As he is pondering over this thought, Gwang Nam arrives at his house and slaps him out of nowhere.

Till now we have seen that Ok Hee sees a message on her husband’s phone in the middle of the night. This makes her suspicious of him and she thinks that he is having an affair. The next day just to observe how he acts, Ok Hee offers to drive him to the office. After they part ways she decides to give Hee Ok a visit at her hotel but a clash in the arrival happens as both Ok Hee and Gwang Nam arrive at the same time. Now, Ok Hee is sure both Gwang Nam and Hee ok are having affairs. However, she does not know they are involved with each other.

Later, Ok Hee calls Mi Ja for lunch but she has a reason behind it. While they are eating Ok Hee suddenly reveals that Gwang Nam is having an affair. This makes Mi Ja very uncomfortable as she knows about it but cannot say anything. Even after this Ok Hee does not stop and tells Mi Ja about Hee Ok having an affair. When asked how is she so sure Ok Hee describes the scene she witnesses at the hotel. Although she does not know who the guy is because he was fleeing off with a robe on his head.

So Ri is still hurt because of ‘Twist’ closing down and her grandfather notice this. He does not know that it is because of Ha Ru going away but he does notice that something is bothering his granddaughter. At the office, Yoon-Ah is very excited to tell Ha Ru that she will be going to Silicon Valley with him. When she sees that the inventories are still at the office she decides to sell them at half price on the street. As So Ri arrives at the office she sees Yoon-ah selling her hard find clothes and this makes her furious.

Even after being almost caught Gwang Nam visits Hee Ok again at the hotel. As he enters the hotel Ok Hee calls him but he lies to her saying that he is at the Seoul art center. As he is in the room with Hee Ok, he gets a message from Mi Ja telling him that his wife is on her way to Hee Ok’s hotel to find out about the man she is dating. When Ok Hee arrives at the hotel she mistakenly goes into the wrong room giving Gwang Nam time to get away with Hee Ok.

The ‘Love Twist’ episode 11 release date is 27th December 2021. In the upcoming episode, Hee Ok hesitates to tell Gwang Nam about So Ri and Ha Ru working together. At night when Ha Ru reaches home, he discovers the Silicon Valley tickets on his desk. This does not fit well with him and he asks Yoon-ah to leave him alone. Gwang Nam arrives at Ha Ru’s home unexpectedly and slaps him. He is very furious and warns Ha Ru to stay away from her daughter. Did Gwang Nam find out about So Ri working with Ha Ru?

Where To Watch ‘Love Twist’ Episode 11

The South Korean drama ‘Love Twist’ is a television drama broadcast by KBS2. People living in South Korea can watch ‘Love Twist’ from Monday to Friday on the official network. As for international fans, the ‘Love Twist’ episode 11 is available on the subscription-website Rakuten Viki.