Ok Hee is sure that her husband is having an affair. To keep his affair, a secret Gwang Nam hires Kyung Joon as his driver. 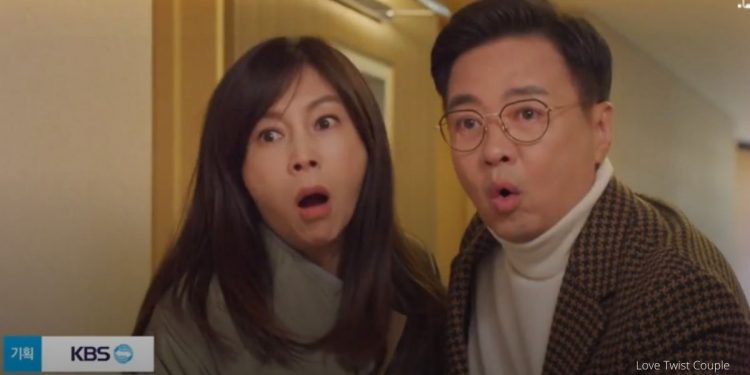 Gwang Nam is on the verge of getting caught as Ok Hee is suspicious of his behavior. Even at night, she checks his phone when he gets a message from Hee Ok. Luckily, he is able to convince her that the message is from a restaurant in New York that uses, ‘Burning and ready to launch’ as a slogan. To confirm her doubts Ok Hee decides to drive her husband to the office and observes how he behaves with her. In ‘Love Twist’ episode 10 Gwang Nam struggles to run away from Hee Ok’s hotel room as Ok Hee is about to enter.

As for So Ri and Ha Ru, their relationship has always been complicated. When they were children So Ri’s mother brings Ha Ru home and raises him as her own. They have had a close bond since the beginning but So Ri has never thought of Ha Ru as a brother. Instead, the first time she meets him she feels like her cat who she loves very much has come back to her.

Till now we have seen that So Ri’s grandfather gives her an ultimatum to bring the person she wants to marry before the year ends. Also, her father’s determination to make her work in his company leads to the shutting down of ‘Twist’. Finally, the question arises whether Ha Ru will accept the job in Silicon Valley or not? Other than So Ri, Ok Hee is also concerned about her friend Hee Ok. Late at night when Gwang Nam gets a message Ok Hee reads it and wonders who might have sent it.

When Gwang Nam sees Ok Hee using his phone he gets angry and tells her that the contact is just a restaurant in New York. However, she is not convinced and is sure that something is going on. The next day, Ok Hee offers to drive her husband to the office but he again gets mad. After they part ways at the office Ok Hee’s suspicion of her husband having an affair turns into confirmation. Unaware of his wife’s suspicion Gwang Nam asks Hee Ok to sift into one of his guest houses.

Even though Mi Ja has agreed to not say anything Gwang Nam is still worried about his secret. In order to make sure his affair is hidden he decides to give Kyung Joon a job at his company. Will Mi Ja be furious when she finds out that her son will be doing a driver’s job? We will find out about this in ‘Love Twist’ episode 10. After dropping Gwang Nam, Ok Hee calls her friend and asks to meet for lunch. However, Hee Ok refuses her plan and this makes Ok Hee suspicious of her as well.

Now that Gwang Nam has hired Kyung Joon as his driver he need not worry about Mi Ja telling Ok Hee about his affair. As he is leaving office he gets notified that the scheduled meeting is canceled so he decides to give Hee Ok a surprise visit. This leads to a clash of timing between him and his wife visiting the hotel. However, luckily Gwang Nam succeeds to avoid being discovered at the hotel.

The ‘Love Twist’ episode 10 release date is 24th December 2021. After meeting Hee Ok, Ok Hee goes out for lunch with Mi Ja. As they are having lunch Ok Hee confesses her suspicion about Gwang Nam having an affair. She also thinks that Hee Ok is having an affair with someone and that’s why she keeps acting secretive. Will Hee Ok be able to solve this mystery?

Where To Watch ‘Love Twist Episode 10?

The South Korean drama ‘Love Twist’ is a television drama broadcast by the KBS2 network. This is a daily drama so people living in South Korea can watch the ‘Love Twist’ episode from Monday to Friday. As for international fans, the drama is available to stream on the subscription website Rakuten Viki.

Bad Buddy Episode 9: Hold My Hand Till The End