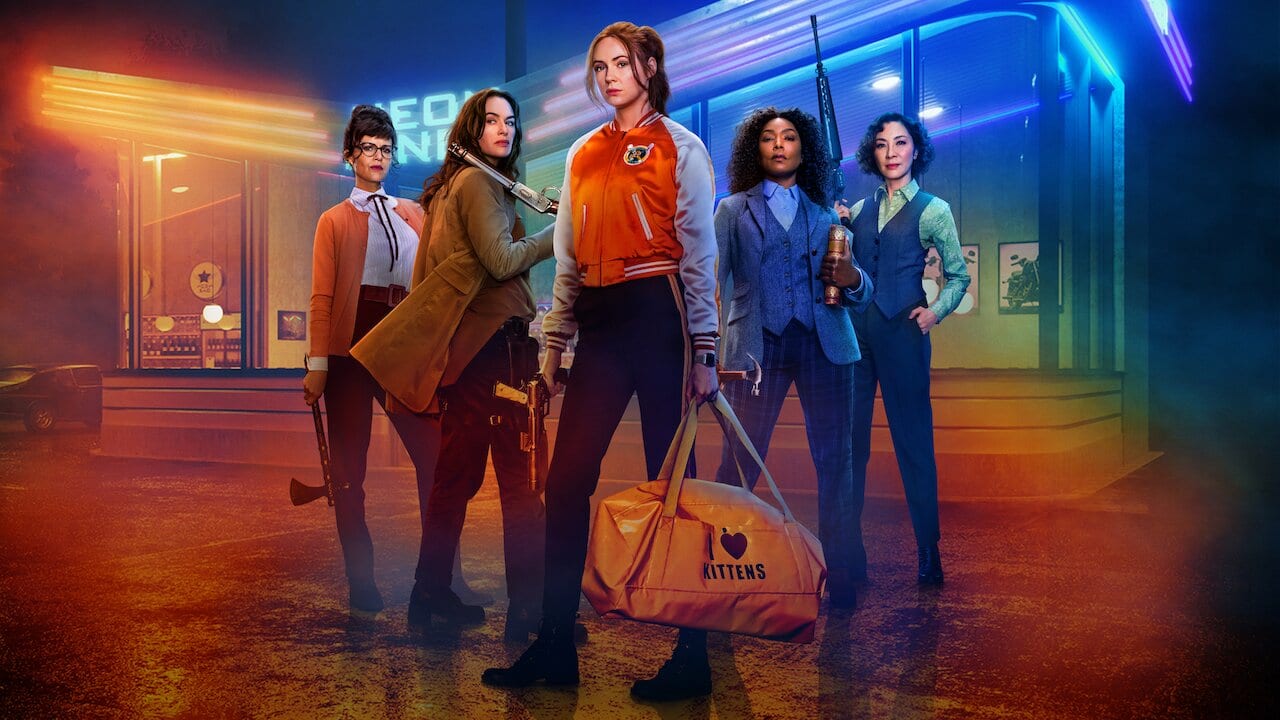 The film’s production was announced back in 2018 at the American Film Market as a co-production between The Picture Company, Babelsberg Studio, and StudioCanal’s German branch along with the participation of French television channels Canal+ and Ciné+. The movie was released in the United States on July 14, 2021, by Netflix along with a limited theatrical release. As for the theatrical release in France and Germany, it is scheduled to be released on July 21st and September 2nd respectively.

Directed by Navot Papushado, Gunpowder Milkshake is a 2021 action thriller film based on the script co-written by Ehud Lavski and Papushado.

To say in one sentence, the movie is as similar to drinking a milkshake with gunpowder in it, which we never suggest in the first place to try. now let us look at the detailed review of the movie Gunpowder Milkshake review. The movie is basically an old ’90s and early ’00s flick that has all of the self-consciously absurdist, ironically nihilistic action-thriller elements, but with a woman in the lead? When watching this movie we could see that has this retro vibe but in a bad way.

After the Israeli cult favorite Big Bad Wolves, Navot Papushado came with a lot of promises with a storyline that has Lena Headey, Michelle Yeoh, Carla Gugino, and Angela Bassett as the lead in an assassin group called the Librarians. This group should save the child from the up-and-coming hitwoman Sam played by Karen Gillan. The movie got a lot of attention for bringing female icons in their 40s, 50s, and 60s as the cast for an action thriller movie. 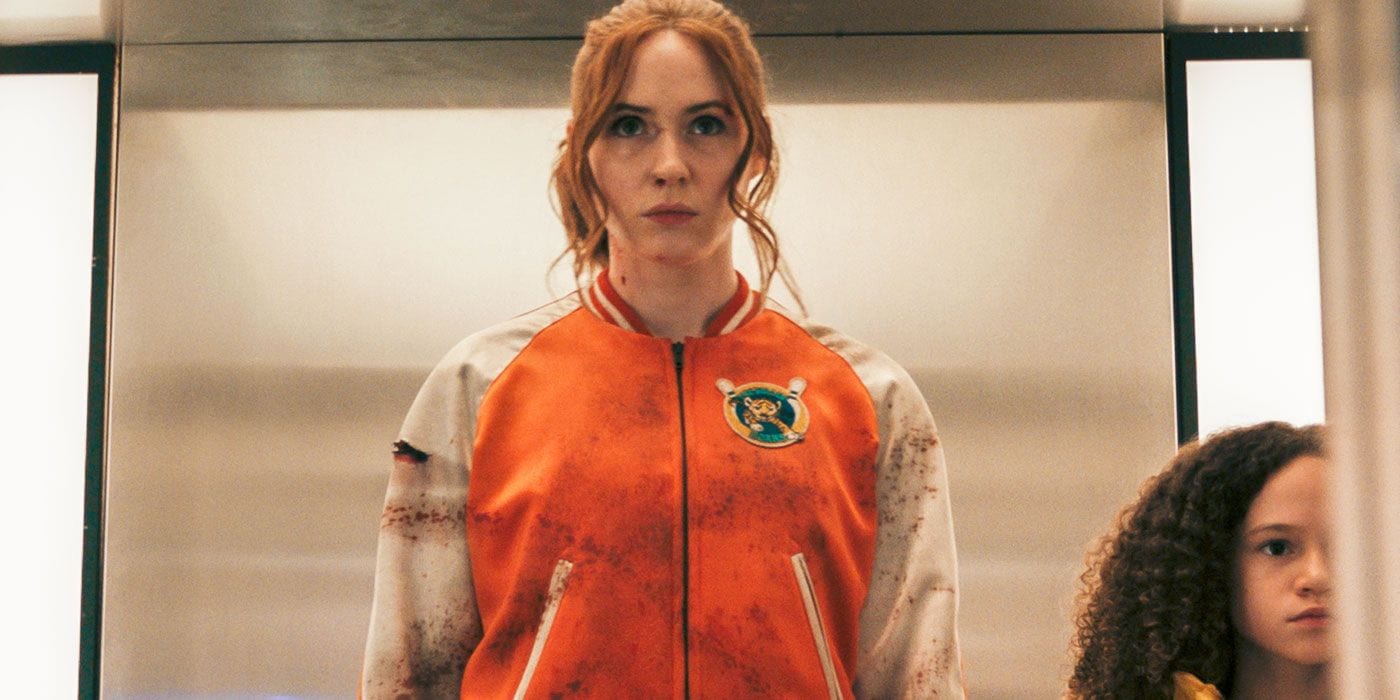 The movie has a similar experience like drinking a milkshake with gunpowder in it, which we would never suggest anyone to do in the first place to try.

In a 1950s diner, the recurring set has very elements of the vintage darkness of Riverdale. Preteen Sam sees her mother Scarlet, played by Headey for the one let time before she dispatches a Russian villain and disappears. At this time Sam was getting training to work for a shadowy crime syndicate called The Firm from the unassuming kingpin Nathan, played by Paul Giamatti. The Firm has been running things for a long, long time and when they need someone to clean up their mess, they send her.

This time, she is assigned to kill the son of a powerful mobster and then threaten an embezzling accountant. Turns out that the accountant stole the money to pay the ransom for his kidnapped little girl, Emily, played by Chloe Coleman. Things go south immediately, and soon we see Sam and Emily on the run, away from both the mobster and the Firm.

In the run, Sam is able to reunite with her mother after fifteen years, and they find a temporary haven in the Library, which has an impressive range of weapons hidden inside the books. The other Librarians are skeptical at first since they weren’t able to see Scarlet since she disappeared.

The story doesn’t have much of anything to the story other than the 8-year-old apprenticing herself to a bunch of assassins. Even if we try to look at any emotion, lucidity, or even just a satisfying plot development, then turns out that you will be disappointed. The movie features a whole lot of stylized posturing, that has bantering killers, winking nostalgia, and heavy violence. 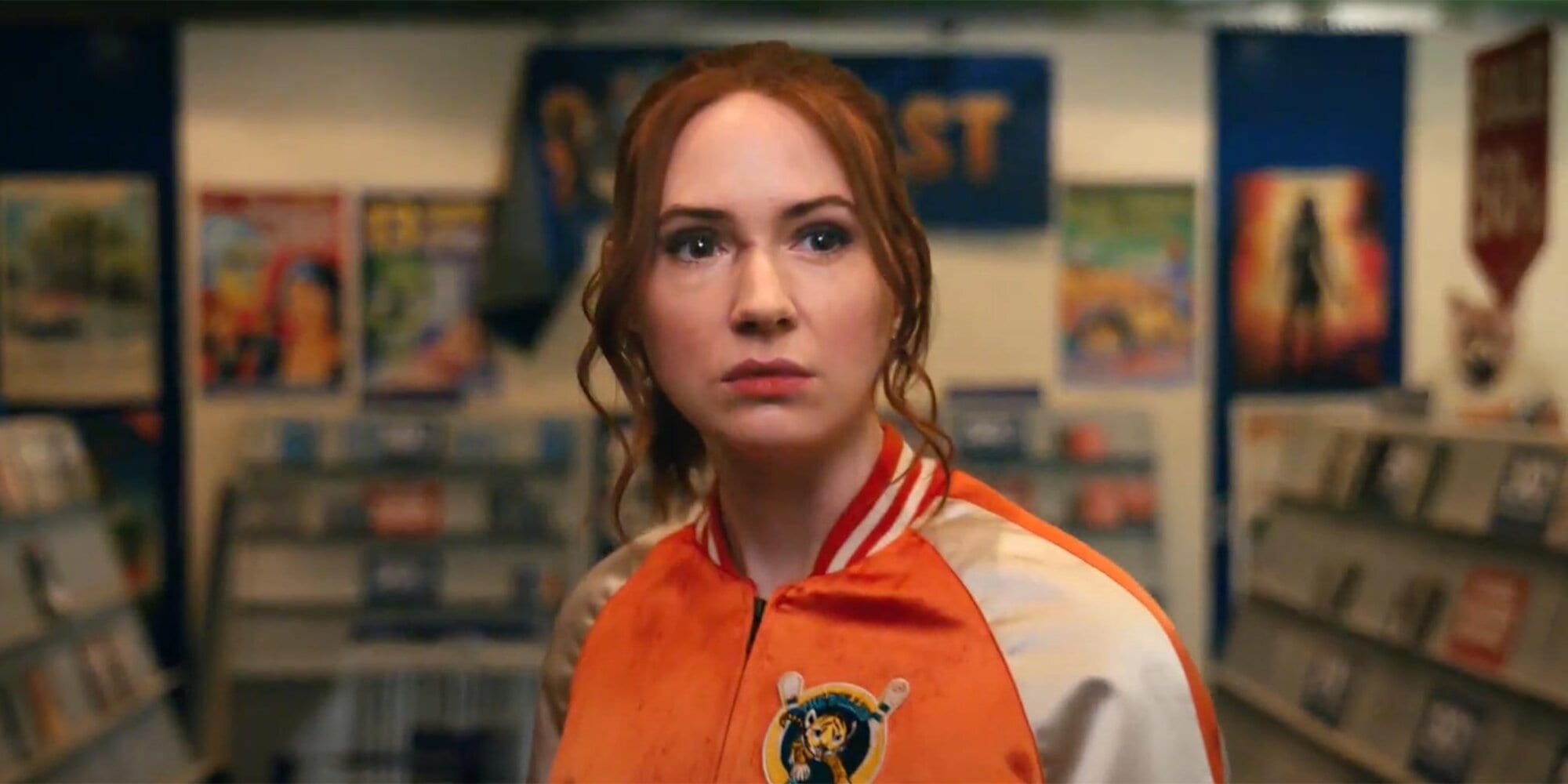 The movie features a whole lot of stylized posturing, that has bantering killers, winking nostalgia, and heavy violence

The movie does look expensive, containing impressive sets and detailed production design by David Scheunemann. The crew also has cinematographer Michael Seresin. Despite a few highlights, that do not to be needed to be mentioned specially, most of the choreography feels stale and unspontaneous. The same goes the case for the editing and the fights in the movie

The movie has a good cast but failed to use them properly. The cast includes Karen Gillan as Sam, Freya Allan as young Sam, Lena Headey as Scarlet, Sam’s estranged mother as well as the former leader of the sisterhood of assassins, Carla Gugino as Madeleine, Michelle Yeoh as Florence, Chloe Coleman as Emily, a young girl that Sam protects, Ralph Ineson as Jim McAlester, the leader of the crime organization, Adam Nagaitis as Virgil, Michael Smiley as Dr. Ricky, Angela Bassett as Anna May, Paul Giamatti as Nathan. Additionally, Samuel Anderson also appears as David who is Emily’s father, Mai Duong Kieu as the nurse at Dr. Ricky’s clinic, Ivan Kaye as Yankee, Jack Bandeira as Crow, and David Burnell IV as Shocker. 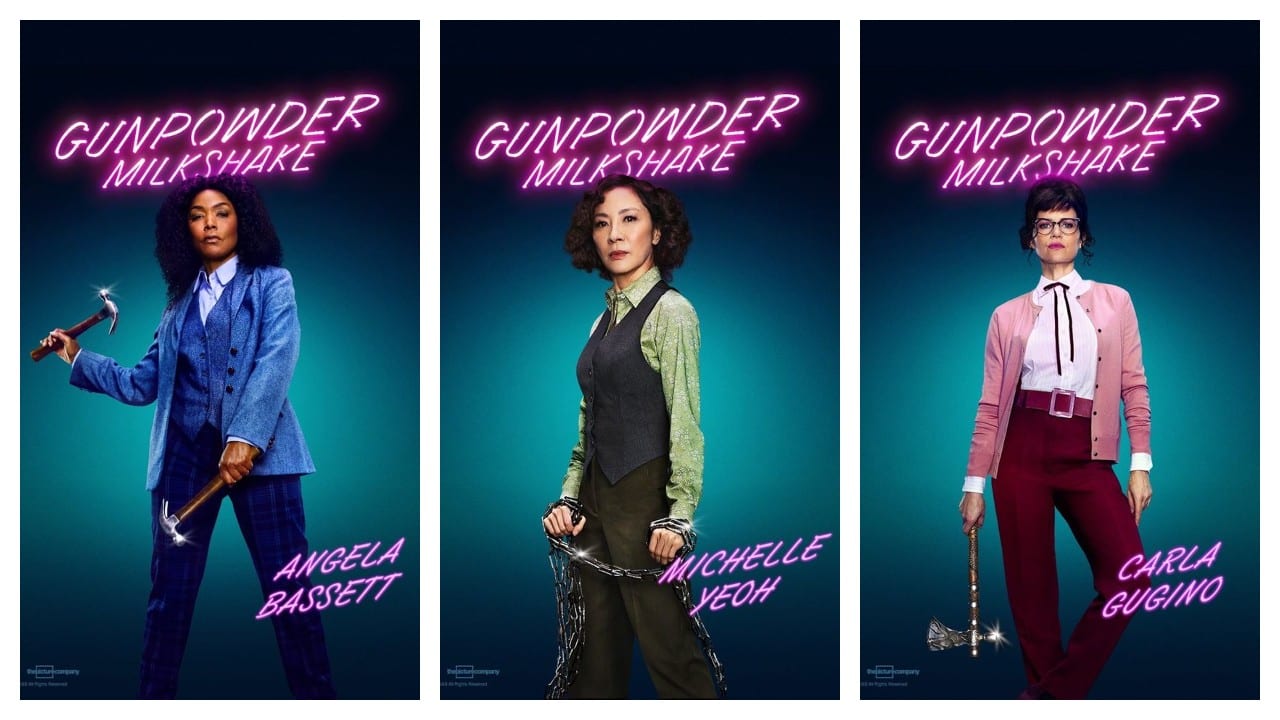 The movie has a good cast but failed to use them properly.

Even after having a pretty huge cast, The talents of the cast are wasted in this film. It’s totally dispiriting to watch this much of a cast unused in the movie, since that may have changed the overall experience. Yeoh doesn’t have anything to do much and makes us confused as, why anyone would hire her for an action movie and then not use her.

Gugino has a big scene, Bassett provides some steel, and Headey showcases her painfully clunky mother-daughter dialogue proficiently. Gillan tries to do her best with whatever she was given. Coleman has shown good overall performance in the movie and promises a brighter carrier ahead for her.

So to sum it up, while it’s a great idea to have women in the lead of an action thriller movie, Gunpowder Milkshake fails miserably in executing the idea. If you wanna watch women lead action movie, you can watch or even rewatch the Black Widow, or the Wonder Woman franchise. 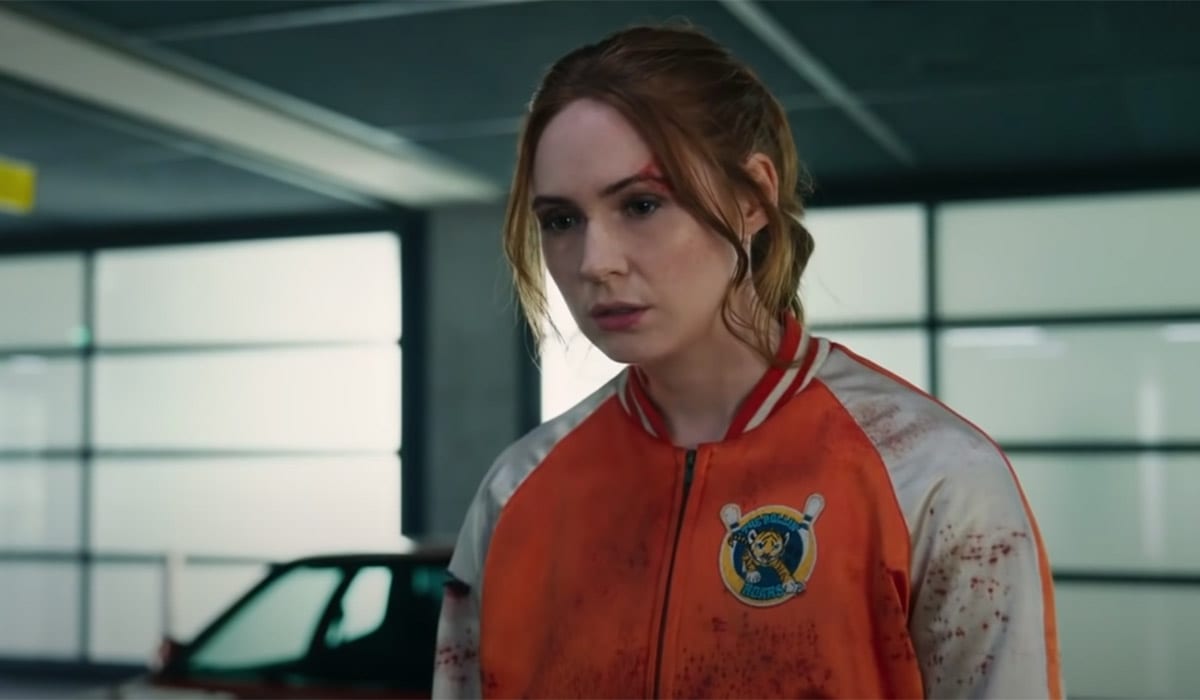 while it’s a great idea to have women in the lead of an action thriller movie, Gunpowder Milkshake fails miserably in executing the idea.

Even though we said the movie doesn’t have much in the aspect of a story, some may still seem confused about the ending, and we will be looking at the same. When the fight between The Firm and the Librarians was about to end, something unexpected happens as Emily is kidnapped by one of The Firm’s henchmen.

In order to save Emily, Sam decides to arrange a meeting with The Firm’s leader in a diner and discuss the possibilities to free Emily. He states that we will let Emily free if he can have Sam. When the Librarians came to know about this, they came into action and attends the meeting as waitresses in the diner. This leads to a major action scene with blood and gunfire occurring in the diner. 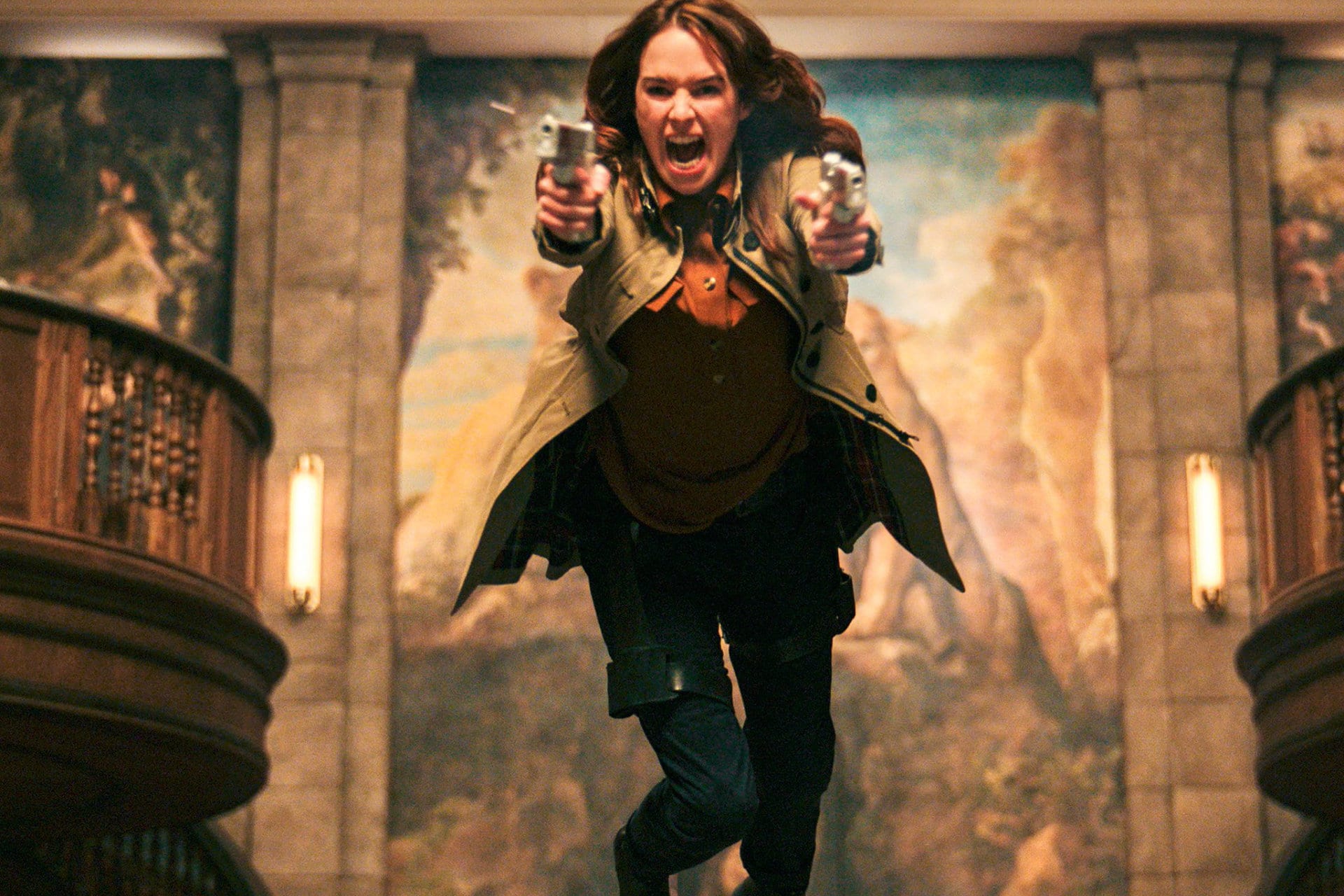 Even though we said the movie doesn’t have much in the aspect of a story, some may still seem confused about the ending, and we will be looking at the same.

Later, Emily arrives at Nathan’s doorstep, as a Girl Scout selling cookies. She wants to help Sam. Meanwhile, Sam calls Nathan through a cell phone while she has a laser sight pointed towards her. She tells him to leave the Librarians, Emily, and herself alone. He responds that he won’t be able to make any promises. Thus giving a hint that the sequel of the movie may be in the works.