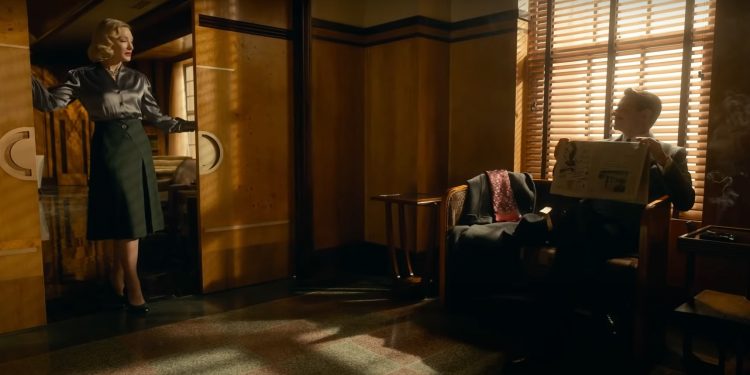 Nightmare Alley is a movie by Guillermo del Toro which stars Toni Collette, Cate Blanchett, Willem Dafoe, and Bradley Cooper. And we at Otakukart share will here trying to explain the ending of Nightmare Alley. Bear in mind that this article contains spoilers. Once we get that out of the way. If you’re not familiar with this movie, it is based upon Willian Lindsay Gresham’s 1946 book.

The Nightmare Alley tells us the story of Stanton Carlisle, a very talented fraudster and womanizer who joins a carnival to become a trusted confidante of a mentalist and a seer. In this movie, we see how Stanton defrauds everybody around him and slowly makes his way to bigger targets. Now, without any further ado, let’s begin covering this movie’s ending, not without first telling you a little bit more about the plot.

Stanton Carlisle torches his house in the American midwest and joins a carnival. During the carnival’s journies, one of the crucial men of the crew becomes ill. And the owner tells Stanton to dispose of him. Later on, Stanton is shocked with carnival life and the works of his employer, who take advantage of addicts and alcoholics by fueling their habits in exchange for payment. After that, Stanton meets Madame Zeena and Pete, whose activities in the carnival are one of divination and deception by fraud.

One night, Stanton poisons Pete by mistake. After that, Stanton leaves the carnival. Two years pass by, and now Stanton is “The Great Stanton” with a psychic act for the wealthy of New York, and he swindles them for cash doing what he learned in his years as a carny. During a performance, Lillith Ritter tries to expose Stanton and Molly, his assistant, for their fraudulent ways. But the duo manages to best Lillith Ritter and get the attention of a wealthy judge who employed Ritter to get to Stanton, and now this Judge wants to pay Stanton to communicate with his dead son.

Stanton manages to flip Ritter to his side, and the two begin an affair and conspire to swindle the judge out of his money. Later on, Judge Kimball introduces Stanton to Ezra Grindle, whom Ritter distrusts and warns Stanton not to trust her. Because of his relationship with Ritter, Molly decides to leave Stanton, but he persuades her to do one last job. After that, Ritter feeds Stanton intelligence on Grindle. During one session that goes awry with Ezra Grindle, the man swears revenge when he finds out that the whole act is a charade.

Before Molly leaves Stan for good in the ending of Nightmare Alley, Stan beats Grindle to death and then kills his henchman, Anderson, during their escape. Stan seeks help from Ritter, only to discover that she has been deceiving him the entire time, revealing that she was seeking vengeance for what happened in their first encounter. She is disappointed to learn that he was nothing more than a low-level money-hungry criminal. If he tries to implicate her, Ritter contacts the authorities and claims she will employ her recordings of their con sessions as evidence that he is mentally ill. Stan shoots Ritter in the ear and attempts to strangle him, but the cops arrive, and he flees.

Stan hides in a train, injured and with nowhere else to go, and wanders around like a hobo for years, sunk into alcoholism. He tries to get a job as a magician at another carnival when he reaches his breaking point. The owner refuses him, but at the last minute, offers him a drink and a provisional job as the new geek. “Mister, I was born for it,” Stan finally admits after being broken. He starts out laughing, but then he starts crying. With this, we conclude our coverage of this topic here at Otakukart. Thank you for reading our article, and please keep coming back for more daily updates on all your favorite movies, shows, and series.