To save her friend, Gorya stands against the notorious F4. Instead, she becomes the next target of bullying after receiving the red card! 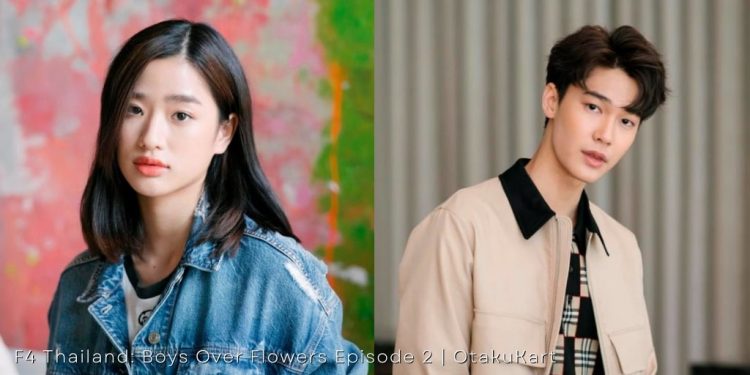 F4 Thailand: Boys Over Flowers Episode 2 is coming soon with a new battle between Gorya and F4! So far, there have been various versions of Boys Over Flowers. Therefore, viewers must already know the main plotline. But no matter how many times we all watch it, Boys Over Flowers will be forever our guilty pleasure! But this Thai version will be a little different, not in terms of story but the execution. And that Episode 1 has already proven. Thus, fans should get ready for this darker shade of Boys Over Flowers!

The latest episode reveals the background stories of all five characters. Although Gorya comes from a middle-class background, she holds very high values. She even earns an athletic scholarship in one of the prominent high schools of Thailand, Kocher High School Bangkok. Before joining the school, Gorya was on the cloud, knowing she would be in the same high school as her idol, Mira. However, all dreams shatter when she learns about the horrible play of F4, the Red Card Game! Still, she stays low due to her parents’ expectations but, all barrier breaks witnessing her only friend getting bullied by the notorious F4. Thus, F4 Thailand: Boys Over Flowers Episode 2 will reveal the real war between Gorya and F4!

Ep 1 of F4 Thailand: Boys Over Flowers shows Gorya making a new friend, Hana, a newly transferred student. She let Hana knows the vicious Red Card Game of the infamous F4. However, she couldn’t save F4’s new target, the school’s top student Phaha who tries to expose their sickening game to the world. Witnessing such scenes every day sickens her but, there is nothing she can do until that day. Accidentally, Hana spills food on Thyme, the leader of F4. She apologizes but, Thyme orders her to lick his shoes to earn his forgiveness. Eventually, Gorya speaks up for her friend, not standing this disgusting bullying. Although Thyme forgives Hana, he targets Gorya by sticking the red F4 card in her locker, making her first girl target of their bullying!

Everything turns into a mess after receiving the red card. Gorya’s only friend Hana even turns her back. The boys cross limits by recording her video, but thankfully Ren saves her at the right time. Seeing her daughter going through a rough time, Gorya’s mother brings a new pair of shoes to cheer her up. However, the next day, the school’s students take her shoe and lead her to the bullying place, the old stadium where there are no CCTVs. Thyme cuts her shoe, dumping it in a dustbin, saying trash should be in the trash can. However, the enraged Gorya wears that half-cut shoe and kicks him hard, challenging him that she will not back off now! Finally, declaring a war against the notorious F4! Hence, F4 Thailand: Boys Over Flowers Episode 2 will reveal the aftermath of this challenge!

F4 Thailand: Boys Over Flowers Episode 2 will be released on 25 December 2021 at 8.30 pm ICT on GMM25. Finally, the first episode has given a glimpse of what is awaiting in the story! Those who have watched the other countries’ versions must know the storyline. However, the Thailand version is indeed different in executing the plot. Now the war between Gorya and F4 has begun, we have to see where it will head.

The preview of ‘F4 Thailand: Boys Over Flowers Episode 2 is already out! It reveals students will attend a party. However, the bullies will not leave Gorya alone! They will even harass her at the party. However, Mina will interrupt it. It seems Mira is impressed by Gorya’s courage to stand against F4 and hopes she will change them. Amid this war, love will blossom! Slowly but surely, Gorya is falling for Ren. But how will she reach after learning Ren’s heart yearns for someone else? Will she be able to suppress her feelings? Or fall even harder in love with Ren? Find out how Gorya’s life turns in a new direction with love growing little by little in F4 Thailand: Boys Over Flowers.

Thai viewers can watch the series on GMM25 at 8.30 pm ICT. Simultaneously it will also be streaming on the official YouTube channel of GMM25 for all international viewers. As for the other countries, Episode 2 will release on the same day at 7 pm in India, 1.30 pm in the UK, and 8.30 am in the USA. On 26 December 2021 at 12.30 am, it will be out in Australia. F4 Thailand: Boys Over Flowers series is also available on ViuTV with English Subtitles. However, ViuTV streaming is accessible in only a few selected countries.

Dynasty Warriors 9: Empires, Everything You Need to Know

Are Karent and Rodolfo Still Together? RHOM Season 2’s Couple!