Madhouse animated some of the most badass anime in the industry. The studio has a very fashionable sense of animation, and many shounen scenes were turned epic and flashy by them. Their works include No Game No Life, One Punch Man, Parasyte, and even the renowned most people’s first anime, Death Note. Out of many, these remain as some of the most well-known shounen and seinen works of the studio. Madhouse is widely appreciated by fans for bringing many manga plots to life with a lot of accuracies. For such a well-appreciated studio, its original was sure to grasp a lot of attention. Goodbye, Done Glees is an upcoming film by the studio which also happens to be an original. The film was announced recently, and fans were immediately interested to know more about the Goodbye, Don Glees release date and details.

Originals always intrigue a strong level of curiosity among anime fans. The first thing that brings fans steps closer to wanting to explore an upcoming anime is the studio. Under the name of Madhouse, Goodbye, Don Glees immediately attracts a lot of attention. However, Madhouse is not the only exciting part of the movie. The movie’s staff is also quite talented and promising. Another Madhouse original television series, Sonny Boy, is coming out on July 16, 2021, as well. With Madhouse on the roll with originals, let us hope Goodbye, Don Glees lives up to the hype.

Looking for information on the Goodby, Don Glees anime film? Here is everything we know about the Goodbye, Don Glees release date, and other details. This includes visuals, staff, and plot.

Goodbye, Don Glees reunites the staff members of the 2017 anime, A Place Further Than the Universe, yet another Madhouse original. The series captured the girls heading towards the big dream of “Aiming for Antarctica”.

Goodbye, Don Glees is introduced as an adventure story about boys (“Don Glees”) during another different summer vacation. After traveling with friends, they will reach “Iceland”, a land of flames and ice, and will achieve a certain “treasure”. The characters have so far only been revealed to be 15 years in age. Atsuko Ishizuka is directing the film and also composing the screenplay. Its characters are designed by Takahiro Yoshimatsu. Yoshimatsu comments that he is confident that Ishizuka’s work will reach the heart of the audience and also that he is looking forward to the completion of the project. Kadokawa will be producing the movie in the theatres on its release.

On 2 July 2021, the first teaser of the anime was uploaded on the official Twitter page of Goodbye, Don Glees. In the teaser visual that was lifted, two boys are seen posing in front of the rainbow-covered waterfall excitedly. Next to them is a  mysterious person staring at the waterfall. Furthermore, the uncanny existence of a red telephone booth beside them does not look natural. It seems like the movie will be unveiling a fantasy world that might just leave the viewers baffled. 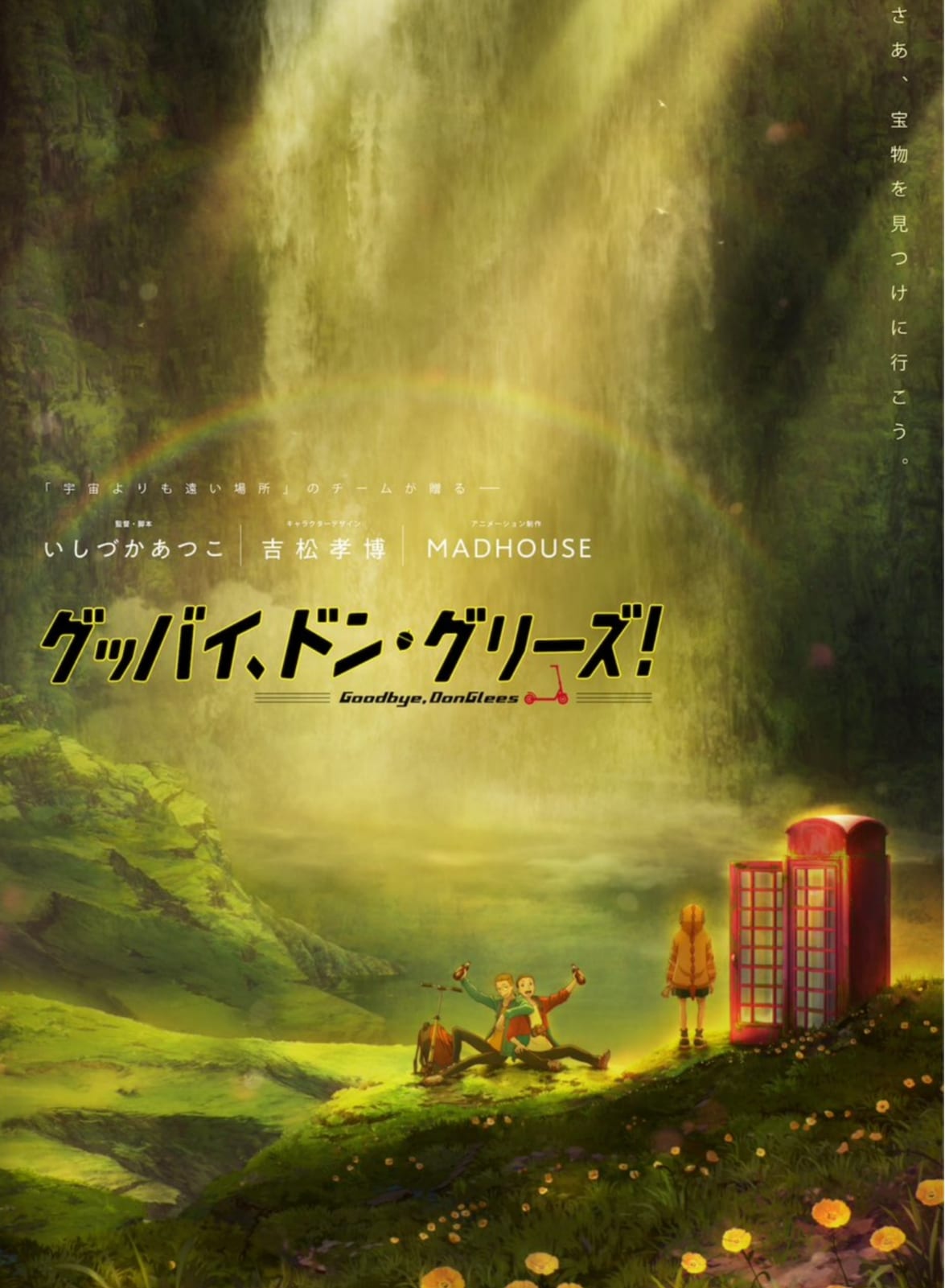 As far as first visuals teasers go, this does not look disappointing at all and keeps our hopes for the movie alive.

Also Read: Blue Reflection Ray Episode 13 Delayed – Everything About it

The movie’s announcement was made on 2 July 2021. It is impossible to expect a specific release date so early, but it has been confirmed that Goodbye, Don Glees will come out in 2022. For a movie announced during the summer of this year, we can hope to see it premiere by the end of summer 2022 or mid of Fall 2022. However, this is only speculation as we wait for further updates.

Goodbye, Don Glees anime movie is described as the first original feature-length theatre animation presented by the team. We only have this limited information so far. However, we can expect all-new details about the voice cast, more staff, a trailer, and an extended plot introduction in the nearest future. Till then, you can continue following the anime film’s official Twitter account. Alternatively, you can also check in to our website for all future updates.