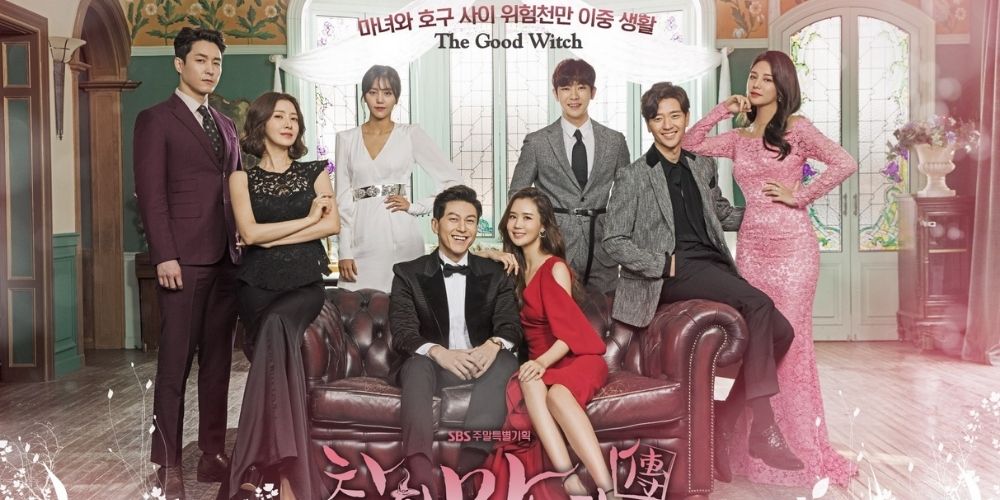 The drama Good Witch is released in the year 2018. It is one of the most interesting dramas back then. The director of the drama is Oh Se-Gang. The screenwriting of the drama is handle by Yoon Young-Mi. It revolves around the life of two twin sisters, identical twins. One of the sisters is a housewife married to an incapable man who does nothing except staying at home. The other one is the flight assistant.

The drama takes another turn when both of them change their respective roles, and life turns. Moreover, the drama genre revolves around Comedy, Romance, Drama, Family, Melodrama. It is one of the trendings and liked dramas of the year 2018 as it was something fresh and different to watch. The drama is also known as Cheokhanmanyeojeon, Good Witch, The Good Witch, Chakhanmanyeojeon.

The drama is quite refreshing and happy to watch, with some mystery and melodrama followed in the plot. We will be rating this drama an 8 out of 10. Also, the drama is easy to understand except in the instances where both the sister are together. The drama has a total number of 40 episodes. Each episode has a runtime of 35 minutes. The drama is quite long, but it is interesting, which does surpass the length issue. This drama got on air on March 3, 2018, and got off air on May 5, 2018.

The Star Cast of Good Witch

The drama Good witch revolves around the life of two twin sisters who are identical to each other. The actors starring in the drama are Lee Da Hae as Cha Sun Hee / Cha Do Hee, Ryu Soo Young as Song Woo Jin, Ahn Woo Yeon as Oh Tae Yang, Bae Soo Bin as Bong Cheon Dae. They are the main lead of the drama where Da-Hae and Sun Hae are identical twins. Cheon Dae is the husband of Sun Hae. Woo Yeon is another person for whom Sun Hae falls being Da Hae.

Yoo Seo Jin as Min Soo Hyeon, Kim Ji Eun as Wang Ji Yeong, Choi Joon Yong as Gong Hyun Joon, Kim Ha Kyun as Park Ki Bum, Lee Jung Gil as Chairman Song, Heo Tae Hee, Lee Seo An as Bae Yoon Hee, Kim Mi Hye as Yoo Eun Song. They all are an important part of the development of the plot. The drama has some prominent and strong supportive role influence. Overall there are many actors and actresses in the movie as lead, supportive roles, and Guest roles. Each character has its meaning and influence in the drama. The drama also has several guest role which has played an important part in the series.

The drama Good Witch is released in the year 2018 that revolves around mystery, romance, comedy, and relationships. The story is all about two sisters who are identical twins. The role of sisters is played by Lee Da Hae. The drama introduces both the sisters Cha Do Hee and Cha Sun Hee. Both the sisters are identical twins but north-south pole in behavior. They have two different personalities. The elder sister is Sun Hae. She is selfless, someone with a pure heart. Her personality is so loving as she can g to any extent for anyone. She is hardworking and keeps her workup, and tries her best to earn. Unfortunately, she gets into the trap of a swindler.

The younger sister is Da Hae; she is totally the opposite of her elder sister; she is self-centered and cold. Both the sister have a dream of becoming flight attendants. Also, they both have a passion for it. An unfortunate scene happens, and they have to lose their father. The father of the girls was a policeman who was assaulted by the thugs. He dies due to the assault. The situation of both the girl got worse as bot have to leave the house and have to shift to another place which wasn’t comfortable as this house was.

It is also seen that their mother is a hardworking woman; she works hard to take care of her children. Sun Hee is also a bread earner of the family; she uses to work hard so that the household can run. After this scene, there is another part where it is seen that both the sister are given the opportunity to join the school.

The funds were insufficient to send both the sister to the school. Only one could have joined the class. Sun Hae being selfless, gives this opportunity to her younger sister. She decides to work and run the family.

Da Hee works hard and becomes a flight attendant. She is so selfish that she breaks a bond with her sister and mother. After this, it is seen that Sun Hae is proposed by a man name Cheol Dae. They decide to get married, and the marriage was attended by Da Hae. She told her sister that she is working in a rival company which is an obstacle for her. Sun Hae being selfless again leaves her chance of serving as a stewardess.

The leap is seen in the drama where Sun Hae has a lovely daughter. She is mature and cute and asks her mother to be selfish so that people don’t use her. Passing of so many years, one day Da Hae comes to the door of Sun Hae and passes out on her door. Da Hae needs to go through an urgent surgery, and she has to leave the job. Before going to the surgery, she takes a promise from Sun Hae that will work in place of her. Also, she told her that someone would give her something essential for her life.

After this, she joins the board as her younger sister. There she meets a handsome pilot name Song Woo Jin. They share some hilarious yet understanding bond. This makes Woo Jin think that the person who he has fought; now changes, and this makes him fall for her. Both of them like each other, but Sun Hae takes a back step as she is married and has taken the place of her younger sister. The things get messed up as her husband is having an affair. Also, her In-Laws took advantage of her not being around and move into the house and starts living there.

Sun Hae finds that her sister is involved in a dirt conspiracy. Many things are to be handle by her and to be a witness and clear by her. The love story also ends on a happy note leaving Sun Hae a happy little family.

The drama Good witch revolves around the romance and suspense plot. If you are someone who is looking for a drama that is happy and also full of mystery, then this drama is surely something you can watch. The drama is quite long, so you need to be patient with it, but you will enjoy every aspect of the drama. It so something worth watching as the plot is different; the story is not a typical love story. You will get hooked up to the drama once you start watching it. Moreover, it has some great actors, and the representation of the plot is quite impressive. Overall, looking for a long drama to watch, stick to this one. You will surely like it.

Also Read: The Sword And The Brocade Episode 37 Recap