Over the years, we have come across revolutionary manga series one after the other. For 2021, Jujutsu Kaisen is breaking records after records. The manga itself has risen its sales to 590% after the release of its anime. But was it such a surprise? It was overwhelming, but not much of a shock since Gege Akutami was shooting brilliant arcs one after the other. For the anime to end at the Death Painting arc was a big disappointment for many fans who had already read the manga. While we are more than excited to see Yuta Okkotsu’s story in the prequel movie, we are also desperate to see the Shibuya Arc getting animated. There are so many panels worth watching, especially Gojo Satoru in the Shibuya Arc.

Gojo Satoru quickly became a fan favorite right after his appearance. The silver-haired character charmed his way into the hearts of people with his beautiful blue eyes and overpowered jujutsu techniques. As the series continued, there were so many sides to him that kept drawing people closer to him. Gege Akutami’s creativity shines bright as we see the versatile amount of characters in their work. Their efforts and whatever inspired them to create a character like Satoru gave birth to something as mind-blowing as Jujutsu Kaisen.

The character has never once faltered from letting us witness fight sequences worth thinking about in every moment of our lives. Gojo Satoru in the Shibuya Arc was a sight to behold.

Spoiler Alert: The article contains spoilers from the Jujutsu Kaisen manga. Read at your own risk!

Before we dive into analyzing Gojo Satoru in the Shibuya Arc, let’s first understand the character in depth. At the basic level, we know Gojo Satoru is a young man who is extremely powerful. He is always cheerful and calm when fighting his enemies and does not make reckless moves.

Gojo Satoru’s powers are extravagant. Not only towards his enemies but also other sorcerers. Having Satoru imprisoned in the Prison Realm led to disastrous chaos among the sorcerers. Meaning, it was his mere presence that held this society from falling off. Once he was gone, all hell fell loose in the form of the Culling Games. Satoru displays strength that goes beyond a special grade sorcerer. But is his bizarre cursed energy all that defines him? 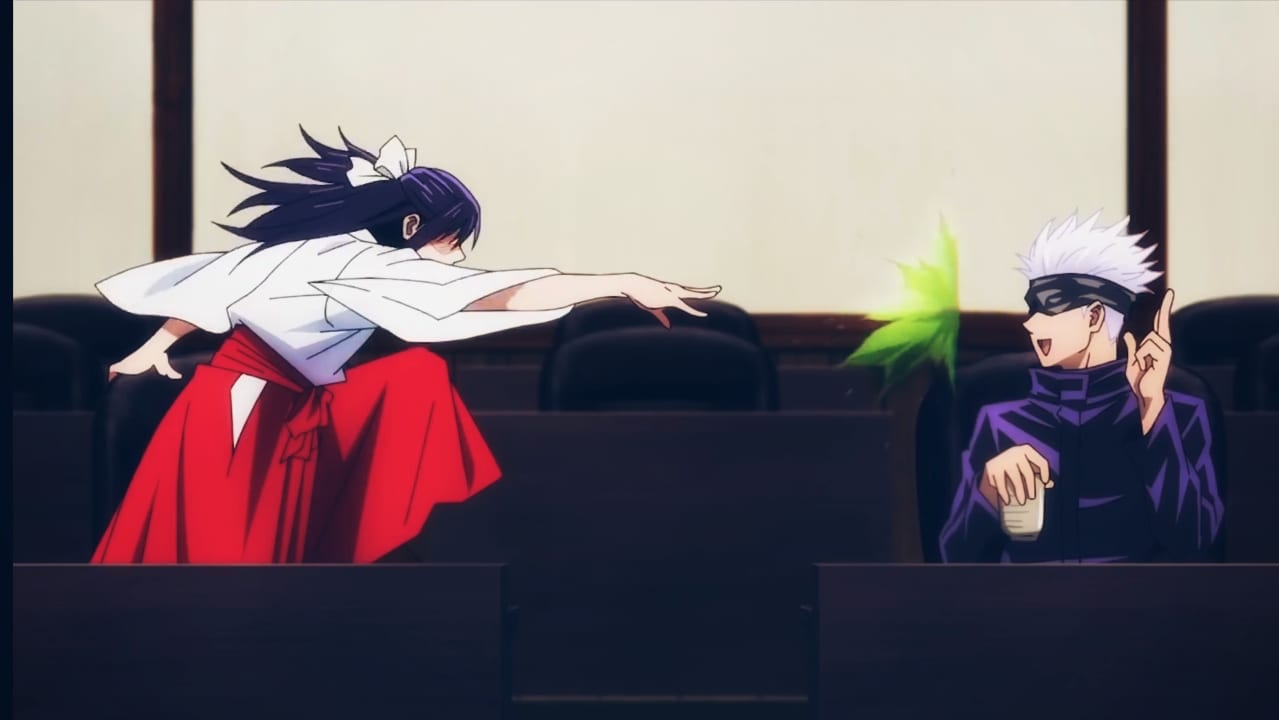 Satoru knows he is strong, and he chooses to prove it, even if by force. He is often filled with himself, and he often looked down on others as a youngster. He is usually calm, but when fighting strong opponents, he would get excited and assert his superiority by going all out. His complex was worse before, but it lessened to an extent after his failure against Toji Fushiguro. A year later, he had mastered his powers, and his levels rose. As a grown-up, he is merciless towards his enemies. However, unlike characters like Itadori Yuji, he is willing to make sacrifices. He does not hesitate to pay the price for a bigger cause.

The Personality of Gojo Satoru

Personality-wise, Gojo Satoru is always seen laughing and being goofy. But, there was a time when he was serious. That was back when he was young, standing next to Getou Suguru. Satoru’s personality cannot be fully analyzed without talking about Suguru. This is the impact that Suguru had on him. Satoru describes Suguru as the ‘only friend he ever had’. He saw the latter as an equal despite the hinge of superiority complex that he shows from time to time. When they fought together, he was always on the top of his game, giving his all. Suguru’s presence gave him confidence, a certain sense of security which probably he could never feel with anyone else.

This is seen briefly in their mission of saving Riko Amanai. Seeing Satoru spend sleepless nights, Suguru asks him if he wants to get back to Jujutsu Tech. He simply replies that he is okay and then adds, “…besides, you are here“.

Satoru shows a bright side most of the time, but he has lost the grip over his emotions only at times when it concerned Suguru. It is quite understandable for him to change to his now goofy ways after the death of Getou Suguru. Not that he is any less efficient now, but he has turned lonely deep inside after losing his only friend.

Very little is known about Satoru’s childhood. Having been born with six eyes, the burden of the power was probably huge. While I refuse to assume anything about his childhood, Satoru is always trying to make sure people have a good youth. First, when he was rescuing Riko Amanai, he suggests that if she refuses to give her body up to Tengen, they would fight for her. Next, he saved Megumi from Toji Fushiguro, who was about to sell him to the Zenin Clan. Finally, his exact words were “I refuse to keep this kid from living the best years of his life” referring to Itadori Yuji’s situation. Over and over again, Satoru shows a certain attachment towards the idea of letting kids live their lives rather than burdening them with the selfish decisions of the adults. The reason is unclear, but he is very considerate of making sure the sufferings of those under him lessen.

Also, Gojo Satoru has shown a strong dislike towards the seniors. Perhaps Masamichi Yaga was the only one he truly respected.

Gojo Satoru In The Shibuya Arc

Now that we’ve somewhat established the core of Gojo’s Personality let’s analyze him in the biggest arc so far in the Jujutsu Kaisen manga.

Gojo excels in combat. He arrives at the site of the incident at 8:31 pm. Right after entering, he analyses the situation and immediately cancels out what he shouldn’t do.

The Shibuya Arc proves that in a fair round, anyone would be at a disadvantage if the opponent is Satoru. He displays a whole new type of characterization that once again gets me appreciating Gege Akutami. Throughout the battle, he is thoughtful and filled with killing intentions towards the cursed spirits.

Gojo Satoru in the Shibuya Arc stands against three dangerous cursed spirits, each of which is capable of wreaking havoc: Hanami, Jogo, and Chosu. The plan they built up was to make use of Hanami’s amplification. Instead of facing him head-on, they decide to limit Satoru’s ability. The amplification increased the amount of missing an aim, meaning this would make him wary of using his blue technique. Other than that, they made sure to involve a lot of humans to make sure he does not make use of domain expansion. The plan sewed up by them was actually pretty clever. As per the instructions of Noritoshi Kamo, they only had to hold him off for 20 minutes.

It barely took a minute for Satoru to understand their plans. His only reply to their well-thought plan is “I’m surprised you thought you could beat me using your sorry excuse for a brain!” Classic Gojo Satoru! Satoru goes for Hanami first. He knew every shortcoming of her amplification. However, we are hit with the realization that even with the normal cursed energy and physical attacks, Satoru can be overpowering.

Satoru does not only rely on head-on combat. After knowing their plans, we would expect him to go straight for Hanami. Instead, he makes sure she turns off her ability by pretending to go for Jogo. In a split second, he kills her off. The next step by the cursed spirits is to maintain their distance. Well, a wise choice since their amplification is gone.

Satoru’s immeasurable void was not only the fastest but also the strongest and smartest move in the entire Shibuya Arc. Non-sorcerers cannot handle being inside a domain without facing adversaries. When Mahito releases thousands of transfigured humans, releasing a domain was probably the easiest way out, but the presence of common people meant to restrict Satoru made it impossible. Somehow, Satoru did fall for the trap they had created. However, he releases the immeasurable void. A void that lasted for 0.2 seconds since, as per his calculations, that was the only amount of time that a normal person could stay inside a domain without lifelong effects. But its aftereffect on the mind lasted for 299 seconds after the void was gone.

An unbelievable record was created by Satoru at this time. He killed approximately 1000 transfigured humans within these 299 seconds.

The victory was visibly in Gojo Satoru’s hands. We often think if it had not been the prison realm, nothing could have defeated Satoru. But, it makes no sense for Satoru to lose to something as petty. A proper reason for his defeat was Getou Suguru. Over and over again, we are brought back to Suguru. The condition for imprisoning someone in the realm was that they need to hold them off guard for a minute. Holding Satoru off for a second was in itself impossible. But, seeing Suguru stand in front of him was enough for not just a minute but years to pass for Satoru.

We are once again reminded of the bond between the two. The regrets in Satoru’s heart for killing him replenished. His unfazed face that barely showed a frown was filled with anxiety. Gojo Satoru in the Shibuya Arc depicts that nothing can defeat him except his own emotions.

There are so many ways to describe the Shibuya Arc. It was utterly ruthless in many ways filled with a bloodbath. Gege Akutami is not holding off to show off a morally high hero. Satoru Gojo is a very powerful yet realistic character. He aims at saving the most people instead of saving all of them. Satoru accepts the casualties as a part of the war. Back in Itadori’s first fight against Mahito, he was horrified by the transfigured humans. In the case of Satoru, he would not think twice before eliminating those who he saw as a threat or cannot save. It’s characters and arcs like these that help us see the true picture of a battle against pure evil. You can read the Jujutsu Kaisen manga on Viz Media or Shueisha’s Manga Plus.