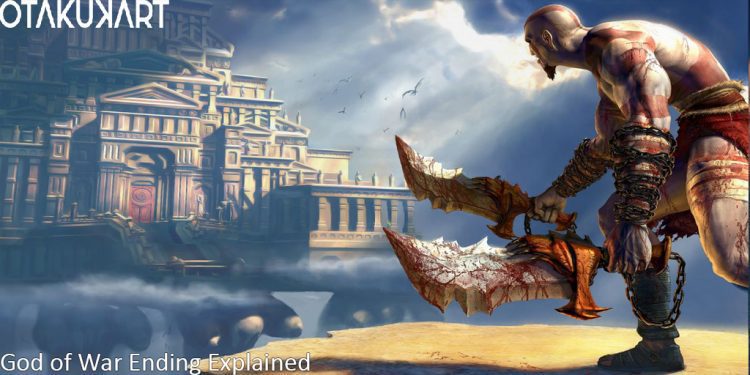 What happens at the end of the original God of War? Does Kratos die at the end? Does he get what he was on a quest for? God of War is an action-adventure hack and slash game by Santa Monica Studios. It was released in 2005 only for the Playstation 2. The game focuses on Kratos and his journey for vengeance against the god of war, Ares, for betraying Kratos into killing his family.

Prelude To God of War

God of war follows Kratos on his quest for vengeance against the God of War, Ares. Before the events of God of War, Kratos goes to a village and kills all worshippers of the goddess of war, Athena, who is also the sister of Ares. Ares secretly transported Kratos’ family members, his wife and daughter, to the same village. Upon reaching the village, he kills everyone, including his family members.

Ares later reveals his reason for the action as Kratos killing his family made him a great and perfect warrior. Kratos becomes horrified by his actions and angry at Ares for making him do it. He swears vengeance on Ares, and at the same time, Oracle of the Kratos’ victim village curses him by sticking and bonding all the ashes of his family members to his body. Kratos’ body becomes white and is called Ghost of Sparta.

Plot of God of War

Kratos starts serving other gods to get rid of his sufferings and visions. He summons Athena, goddess of war, who tells her that if he kills Ares, the burden of his family’s murder will lift, and he will be forgiven. He goes to Athens, which is war-torn. There Athena guides him, and he reaches Athens’ oracle. She tells him that to kill the God of War, Kratos must get the Pandora Box. Pandora Box is a strange-mysterious artifact that grants godlike powers enough to kill a god.

He goes to Desert of Lost Souls and starts his journey for the Pandora Temple chained at Titan Cronos’ back. He summons Cronos and starts to climb for the Temple’s entrance, which he reaches three days after. Kratos avoids many traps and kills foes inside the Temple. When he finally retrieve the Box, Ares throws a large pillar from Athens. The pillar hits Kratos and impales him on a wall from which Kratos slowly starts to die. Ares then arrives at Pandora’s Temple and takes the Pandora Box from Kratos. Kratos gets thrown into the Underworld. In the Underworld, he meets a Gravedigger, the mortal guise of Zeus. With his help, Kratos gets out of the Underworld and reaches Athens.

After reaching Athens, he confronts Ares and opens the Pandora Box. With the power of Pandora Box, Kratos fights fiercely with Ares. Ares learns that Kratos is not any mortal and tries to trap Kratos in an illusion where he sees the murder of his family by himself and their horror-filled faces at their deaths. Kratos pulls himself out of this trap. But when he is out, he does not have any weapons with him and is at the mercy of Ares.

At the end of God of War, Kratos is at the mercy of his former master, Ares. As Ares is about to strike the killing blow to Kratos, he notices a giant sword that is used as a bridge, the Blade of Gods. He takes it and again battles with Ares. This time Kratos finally kills Ares.

After the battle, all the gods congratulate and are grateful for killing Ares. Kratos asks for his rewards from Athena. Athena tells him that his sins are forgiven, but removing nightmares was not something gods ever agreed on as they are not forgivable even by the gods. Feeling abandoned by the gods for not ridding his nightmares, he climbs a mountain and jumps from the highest cliff to the Aegean Sea. Death seemed the only option for Kratos to rid himself of the nightmares.

As he goes inside the Aegean sea to die, Athena intervenes and pulls him out of the sea. She tells Kratos that Gods are indebted for his deed, and after killing Ares, his throne is empty, the throne for God of War. She transports him to Mount Olympus, and Kratos makes his way towards the throne and claims it.