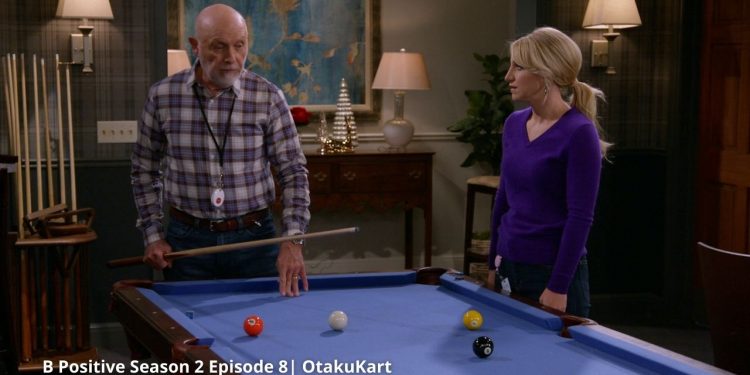 B Positive Season 2 Episode 8 sees Harry making the best of the time Meredith has. In order to do so, the first thing on his list is a special anniversary dinner. But it will require a lot of assistance, so Harry may end up taking Gina’s help. Recently on the show, we found out that Harry and Meredith were at war with each other for some reason. Gina heard them, and Meredith came to confess about her wanting to stop the chemotherapy while Harry didn’t want the same. They were at crossroads, but all Harry wanted was to be there for her.

Coming to Gina, she realized a number of things from their relationship. After what went down with her and Drew, she decided to talk to him. Drew had moved out of his house and bought a van. He is about to go on an adventure to travel the world. She wanted to know if this is because of her or if he is really trying to figure out who he is. Here is a look at what went down recently on the show before we move to B Positive Season 2 Episode 8.

Previously on B Positive Season 2, we opened up with Gina losing her dog Cannoli as he brought him to work. Cannoli finds his way to a number of people before coming to Meredith and Harry’s room. Gina panics, looking for Cannoli everywhere. Luckily Harry called her and told her about Cannoli. She got him back, and Drew came honking near the building. This time she locked Cannoli properly, making sure he doesn’t leave. Drew on his side bought a van which is now also his home, as he will travel in the same.

Meanwhile, Spencer is planning to take Bette out for a date. He needs all the tips about the new norms in relationships. Especially from Norma, who is helping him a lot. Also, Cannoli managed to escape again, and this time he visited the kitchen. Gina managed to find him and visited Harry and Meredith as well. She heard them fighting, and Meredith told her that she is planning to stop Chemo. She wants to enjoy the time she has left. But Harry doesn’t agree. He wants her to get better and doesn’t plan to do the same.

While Cannoli stayed with Meredith, Gina later talked to Harry and comforted him. He confessed how Meredith was there for him when their daughter died. He believes he couldn’t make it without Meredith. Gina believes he helped her so much and asked him not to stop now.

Meanwhile, Bette was angry at Spencer for pointing out her look for their first date. After talking to Harry and Meredith, Gina decided to talk to Drew and ask him this plan to move to the van was because of him. He agreed that he took use of her, and now he wants to figure out who he is. The episode came to a close, with Harry and Meredith getting along.

B Positive Season 2 Episode 8 is releasing on 9 December 2021. It is titled “A Dog, a Mousse and a Bat”. The official synopsis suggests that after coming together, Harry might be planning to make the best of the time Meredith has. So he is looking forward to arranging a special anniversary dinner. For the same, he contacts Gina who would be helping him throughout the same. Drew, on his side, has planned to travel the world in his van and meets a charming young woman who would tag along with him on a road trip.