The fantasy medical drama series ‘Ghost Doctor Episode 3’ is all set to hit the screens. 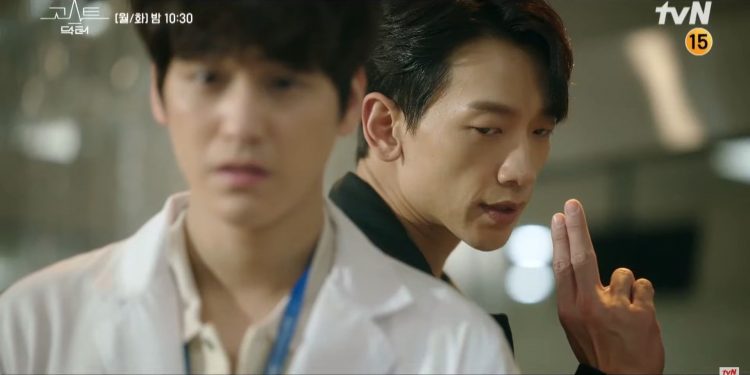 ‘Ghost Doctor Episode 3’ is all set to hit the screens. The South Korean drama series has been doing really well on all the grounds. Therefore, it would be the right thing to say that the show is going to reach another level as the story progresses.

The unprecedented accident of Cha Young Min has been a real shocker for everyone out there, and now with his soul wandering the hallways of the hospital, we are expecting to see many hilarious moments. Moreover, his soul’s chemistry with Seung Tak has been something everyone should give a watch.

Here, we have summarized all the details you need to know about the series before you watch the upcoming third episode of the series. Therefore, let’s have a look quick look inside.

The previous episode of the show brought many truths to the viewers, and all of them were really intriguing to watch. Gradually in the previous two episodes, the show has successfully built up very promising plot points that have easily hypnotized all the viewers inside. The combination of the crappy hands with the golden hands has begun, and nothing is more interesting to watch than seeing them working together.

The car accident of Cha Young Min left everyone in shock. We saw him going to see his ex-girlfriend, Jang Se Jin, but she never showed up. The reason was the call she received from the ICU about Chairman Jang’s status. Young Min tried to be in the Medical Centre as soon as possible, but fate had other plans, and he ended up getting in an accident.

After being rushed to the hospital, Seung Tak stepped into the operation, which was also his first-ever operation. He was warned by the other doctors that Young Min’s BP was going down, and he was in an instant need of an operation. Seeing the situation getting out of hand, Dr. Ahn Tae Hyun stepped in and wrapped up the process.

After a lot of monitoring, it was concluded that Cha Young Min had slipped into a coma. His soul was stuck outside, and he was devastated to know his condition. The situation escalated quickly, and we saw Cha Young Min taking over Seung Tak’s body and performing the solo surgery on himself. The news about this became the talk of the hospital, and Seung Tak became the center of attraction.

Visiting the chairman’s office, Cha Young Min saw his ghost sitting near his bed. They both eavesdropped on the conversation about how his son is planning to kill his father through medical malpractice.

Where to Watch ‘Ghost Doctor Episode 3’?

The tvN drama series’ Ghost Doctor’ is accessible to all the viewers on the streaming platform called Viki. The point to be noted about the platform is that the viewers will need a subscription to get access to the show. Whether they are domestic or international viewers, they would be needed to buy a subscription plan for catching up on all the episodes of the show.

Moreover, the online streaming platform TVING is also available with a subscription plan for all the domestic audiences out there.

‘Ghost Doctor’ Episode 3 will be released on January 10, 2022, at 7:00 PM. The upcoming episode of the series is going to continue the story ahead and hence, free all of us from the previous episode’s cliffhangers.

Both the previous two episodes of the show have done incredibly well. The drama series saw a promising beginning, and now we are sure that the consistency will continue for a long time. Moreover, the engagement level of the show has been really amazing, and all thanks go to the perfect plot points and amazing characters of the show.

Cha Young Min and Seung Tak have been really fun duo in the show. Their bittersweet bromance has taken everyone under its spell, and their character development, too, is very promising.

Also Read: The Series of Misunderstanding Ensue in Tinted With You Episode 6