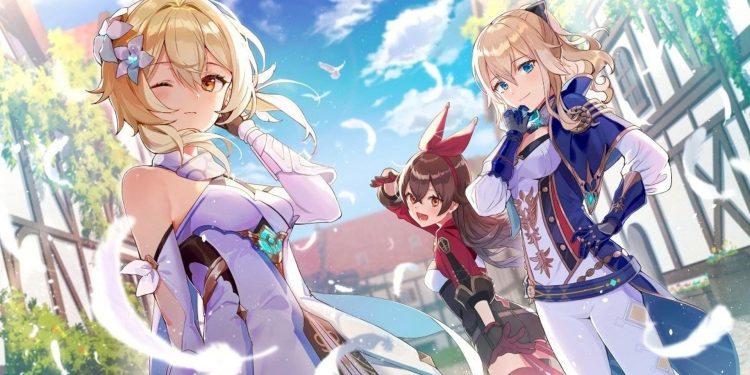 The trailer appears to tease two significant changes, the first of which is the introduction of a new boss. The four characters are fighting an unknown boss-type opponent, particularly Gorou and Itto. It’s a flying snake with a wolf-like head, and its black and gold color strongly implies a Geo-type boss. That would also explain why it was taken down using two Genshin Impact Geo characters. If this new boss is a Geo foe, it will join the Geo Hypostasis and Primo Geovishap as the game’s third Geo foe.

On November 22, Yun Jin official character art was published on Genshin Impact’s official Instagram account. Yun Jin’s origin and personality, as well as his vision type and looks unveiled in this post. Yet Shenhe was absent from the trailer for the Genshin Impact Game Awards.

The Seventh geo vision holder is Yun Jin, also known as Stage Lucida, who is a Geo character with a polearm. She is a resident of Liyue Harbor and the director of the Yun-Han Opera Troupe, making her a powerful figure in Liyue. Some fans question if her gameplay will be similar to Barbara’s, who also sings because she appears to have musical and vocal talent.

Gorou does not yet have a complete character trailer in Genshin Impact. His character teaser had released ahead of his release. It goes through his background as a part of the Sangonomiya Resistance, as well as many of his powers and combos.

Gorou is the Sangonomiya Resistance’s General, and he is resisting the Raiden Archon’s Vision Hunt Decree. He is on the front lines of the battle with his own vision seeking to stem the decline of Inazuma, leading a ragtag army located on Watatsumi Island. Gorou will be the game’s first Geo Archer, displaying his skills on the battlefield and in the Inazuma tale. In his renderings, he uses the Dreams of Dragonfell bow.

Sangonomiya Kokomi is a 5-star Hydro catalyst character who appears a lot of times in the storyline of Genshin Impact. Kokomi’s mastery of water had highlighted during combat. Fans of the Genshin Impact will be able to use them to defeat their opponents and defend their team.

Kokomi is a powerful healer, as her skills grant her team numerous health increases. To heal her companions, Kokomi summons a Bake-Kurage jellyfish. Over the course of its summon, this jellyfish will recover a part of Kokomi’s maximum HP for her friends and inflict Hydro damage in AOE pulses.

Yoimiya Naganohara is a five-star character. She is a Pyro Bow user with a design that focuses on fireworks and several powerful Pyro AOE abilities. Yoimiya, the current owner of Naganohara Fireworks. NaganoharaYoimiya is the Queen of Inazuma’s Summer Festival.

These skills are a visual delight, with a heavy focus on exhibiting Yoimiya’s fireworks. Yoimiya’s prominence in Inazuma as a master of festivities is reflected in his animations, which are among the most spectacular of any character so far in Genshin Impact. Players will not be disappointed by Yoimiya’s Elemental Skill and Burst damage. They set to deal some amazing Pyro damage.