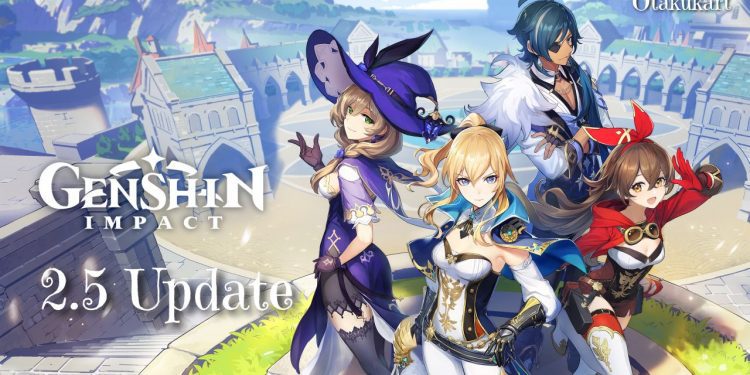 2021 was the year for Genshin Impact. Due to the pandemic, when the world was sitting at home, many had discovered this game for the first time and entered to this anime-style RPG game and loved it. Today Genshin Impact has an active player base of more than 9 million players. To maintain this huge player base, developer Mihoyo had been actively pushing updates that bring new content to the game once in a while. Even before the heat of the 2.4 update is down, the player base has already begun to ask for Genshin Impact 2.5 release date after seeing some Genshin Impact 2.5 leaks.

For those who have never heard about Genshen Impact, it is an action RPG developed and published by miHoYo. As we have mentioned before, It was in 2020 when the game was released for platforms like Microsoft Windows, PlayStation 4, Android, and iOS and for PlayStation 5 in April 2021. The game is also planning to make its entry to Nintendo Switch. The game was loved for combining the Anime style and Open world elements to the action-based battle system. The best part of the game is that it’s free-to-play so that anyone can enter into the world of Genshen Impact. The game makes money through monetized content. Now let us look in detail at the upcoming update of Genshin Impact.

When Yae Miko made her appearance at the game with the 2.0 update, she had already become the fan-favorite. She made a comeback in the 2.1 update too. And after remaining silent for some updates, Yae is back with new skills and powers. With the recent leak Genshin Impact 2.5 live stream, it has been confirmed that She Yae will have a huge role in the 2.5 update and will be with us for most of this Inazuma part two update.

Yae is confirmed to be a new Electro Visson holder with her elemental skills being able to move rapidly while leaving behind lethal shakuras that can damage anyone nearby. Yae also carries Elemental bursts with lightning and thunder, dealing with AoE electro damage. She is also rumored to be one of the strongest DPS characters in-game and can come on par with characters like Hu tao, Ganyu, and Xiao.

The Genshin Impact 2.5 leaks have also revealed that Yae Miko will also have six constellations for this character and among which 4 of them have already been revealed to the public. This includes Yae recovering 7 energy every time heavenly fox triggers a Lethal Sahkura Thunderbolt. The Lethal Shakura cooldown is also reduced by 20%, where the area of effect has been increased by 100%.

After Yae triggers Heavenly fox with her Lethal Shakura, all teammates will receive a 2-% electro damage buff for five seconds. When the Lethal Shakura is created, its initial level will be 2 instead of 1, and its maximum level has been increased by 4. This ignores the 45% defense of the enemies.

Also Read: Who Are The Best Pyro Characters So Far In Genshin Impact?

The 2.5 Update may not include Scaramouche

Scaramouche was introduced back in the 1.1 update and was first introduced during the Crisis Deepens quest. In this, he introduces himself as a vagrant from Inazuma. The 2.5 update was expected to be the return of Scaramouche. After the recent leaks, it seems like we may not see him in the next update.

This news indeed was a shocker as most leaks were pointing towards the involvement of Scaramouche in the next update. The latest leaks are based on the data mining done by the leakers, and according to them, they didn’t find any presence of Scaramouche in the 2.5 update of Genshin Impact.

The community was excited when they heard that Scaramouche would be returning, but now that the data miners have said the opposite, everyone is confused. It is also said that Scaramouche won’t make his return until the 3.0 update. Which, As we all know, can take quite some time for those who were expecting the game to return soon.