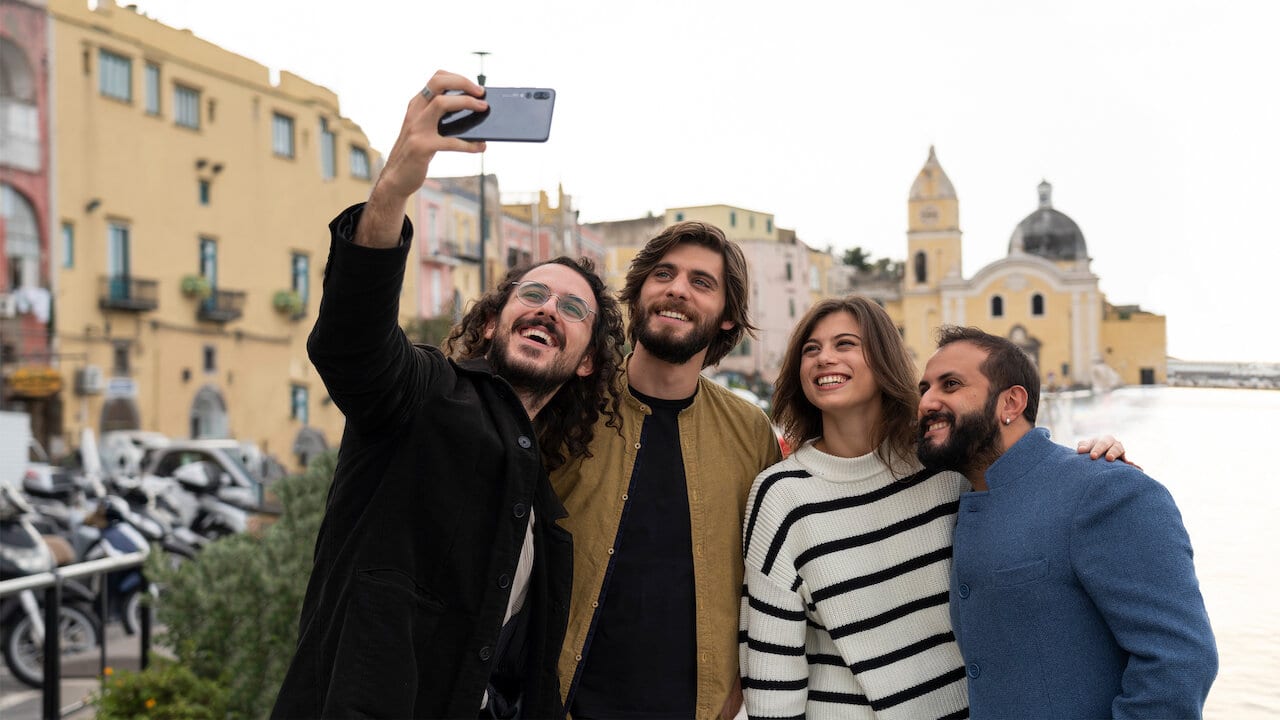 The Cast Of Generation 56k Featuring Angelo Spagnoletti as Daniel, Cristina Cappelli,Gianluca Colucci as Luca and Balsamo as Sandro

Hold yourself real tight because Nostalgia is about to hit you so hard with Generation 56k. In case you miss your teenage years and the times you made so many mistakes you are fixing them. The brand new Italian Netflix Orignal show is for you. Generation 56k is an original story by The Jackal founder Francesco Ebbasta. It is a collaboration between Netflix and the Italian YouTubers group The Jackal, with members of the channel joining the cast as well. It tells a story taking shifts from the 1990s and present times, telling a love story that might have a second chance.

Generation 56k is produced by Cattleya and ITV Studios. So far from the trailer, what we see is a touch of what the 1990s looked like in Southern Italy. Shot at the small island of Procida, the series retells the time internet became a boom and arrived on the small island. Thus changing the face of the world. At the same time, we are taken into the future with the characters all grown up and still embracing the internet culture. But now, more than a boon, it has found itself making the life of people more difficult. Anyway, here is everything we know about the upcoming Netflix Original Italian series Generation 56k.

Generation 56k is releasing on July 1st, 2021, and will be available to stream on Netflix worldwide. It will release at 12.00 AM PDT as of 3.00 AM EST. According to that, the release time may differ in the different countries. Netflix will drop a total of eight episodes altogether, which compensates for the first season of the series. So if you want, you can binge-watch your way out of Generation 56K. To watch Generation 56k, you simply need a Netflix account and one of the three subscriptions the OTT offers.

From The Official Trailer Of Generation 56k

According to the official synopsis of Generation 56k, we will see the story progressing in two timelines. One in the nostalgic late 1990s and one in the present time. Generation 56k tells the story of three friends. Daniel, Luca, and Sandro grew up together as teens in 1998. The time when the internet was booming and changing the world altogether. Around the same time, the kids discover why their parents asked them to stay away from the internet and made a business out of it by taping porn videos and selling them. Fast forward into the future, the same three friends have their own dating app, which they clearly state is for only dating purposes.

From The Official Trailer Of Generation 56k

Daniel using the app, dates someone who doesn’t reveal her face. With that, the show signifies how the internet may sound so beneficial for them during its initial years in the 90s. But now has become such a mess today. With that, Daniel accidentally dates someone who is someone. As he keeps figuring it out, he reconnects with Matilda. A girl he believes he has known for ages. They both enjoy time together and eventually fell for each other as seen in the trailer.

Until they realize they dated each other during his teen years. Now, they have a chance for reconciliation. They both were kids, and probably the internet caused the rift between them as kids. Will the second chance see Daniel and Matilda acknowledging it, or will the past differences kill their newly found love again? All in Generation 56k. Check out the official trailer of Generation 56k below. Full of love, nostalgia, growing up, the good times, and fun.

The Italian YouTubers The Jackal helms the cast of Generation 56k. First, we have Angelo Spagnoletti playing the role of Daniel, who uses the dating app for fun. In turn, reconnecting with his childhood love Matilda. Cristina Cappelli joins the film playing the role of Matilda. Supporting them is Gianluca Colucci playing the role of the most intelligent one in the group, probably Luca, and lastly bio Balsamo as Sandro. Also joining the cast are Biagio Forestieri as Bruno, Sebastiano Kiniger as Enea, Federica Pirone as Cristina, Elena Starace as Rafaella and Claudia Tranchese as Ines.