“Hell-OO! How ya doin’!? HAPPY! JOY-PY! ICE TO MEETCHA-PY!” “TEHEHEHEHEHEHEHEH!! The next line you’ll say…! Your turn!” So, guys, any idea who quoted this? 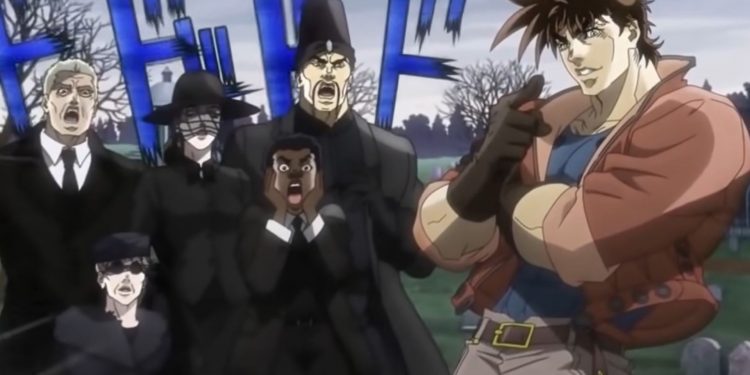 Many may be new to the series so let’s take a quick peek at what’s in there in JoJo’s Bizarre Adventure, okay? The anime adaptation was fun overall. However, the JoJo series is a manga-based anime adaptation. Written and illustrated by Hirohiko Araki, the JoJo series was serialized in the Weekly Shōnen Jump and is also one of the best-selling manga on top of that. Anime fans who are looking for action, adventure, mystery, tragedy, horror, thriller, and supernatural, then go ahead and have a watch. Who knows, you might be hooked into it just like other fans! Coming back, the story is divided into two continuities and has a total of 8 parts. As the name goes, the JoJo series’ protagonist is the Joestar family, starting with Jonathan Joestar, who is also known as JoJo.

Who is Joseph Joestar?

The first JoJo’s grandson, Joseph Joestar. Short answer long – Joseph Joestar is the grandson of Jonathan Joestar of the JoJo’s Bizarre Adventure series. Joseph appears in the second part of JoJo’s series. His stand is the Hermit Purple. He meets with some pretty tough threats throughout his life, including Vampires, Pillar Men, and malevolent Stand users.

In the Battle Tendency, Joseph is seen crossing the world in the days leading up to the Second World War, 1939, to combat the Pillar Men, an ancient race of hostile beings responsible for the creation of the Stone Mask. Just like his grandpa, Joseph also goes under the strenuous Ripple training alongside Caesar Anthonio Zeppeli and tries to protect the Red Stone of Aja.

Here are some of Joseph’s funny quotes which will make your day. Have a nice laugh and a nice day!

Jojo sure knows when to joke around, in situations when to not! This line is one hell of a killer line. Who thought someone could make the audience laugh in a dire situation. Well, that’s what Joseph is like after all.

Joseph’s ‘next line’ compilation is just way above anyone’s imagination. Ever wondered how he can read the lines of his enemies? Well, who knows. Maybe he has the script to himself, and/or maybe he’s just one hell of a badass! Fans will agree with the latter, no?

“H-Hang on, now! What’s with all the surprise? It’s like you saw a ghost!”

Guess this infamous line. Well, the infamous one might be the next line, but for fans to recognize, this much should be done, no? Okay, so you have guessed it correct if you thought of JoJo visiting his funeral scene!! Told you, JoJo knows when to strike up jokes, even when that’s not the right moment. Also, the fact that he didn’t know it was his funeral, so he could’ve just shown up to a random funeral like, “Yo, what’s up,” is hilarious as it is.

Did you ever try syncing with him? No, then try it now. You will be obsessed with his “Oh no…” These phrases might be common, but JoJo saying them just adds flavor to it. His way of saying brings pity, sympathy, laughter, danger, anger, and all those emotions which can be expressed. See, he adds the flavor of emotions in his phrases, no? Oh and, he says he never yells because he wants to. Poor JoJo!

When you are in fight-and-flight situations, what do you do? If you are capable, obviously fight. And if not, then run. That’s how simple it is. But JoJo is on another level. So let’s learn from him. He observes the enemy, knows their strength and weakness, and also has the last card up his sleeve. What do you expect him to do? Well, for fans, they know. So let the newcomers guess. So? Our cute little Joseph RUNS!! He said he would use his leg. When Smokey asked him, ‘how?’ JoJo replied, “To run away, Smokey!”

“I bought tequila. Will you boys let me by?”

Oh boy. There goes our handsome JoJo to a sexy beautiful JoJo lady. No, it wasn’t a mistake, and you did not read it wrong. It reads as “JoJo lady” and not “JoJo’s Lady!” JoJo has always something mischievous up his sleeve, you see.

“I can’t be held responsible if my eyes wander just near the keyhole, right?”

Now everyone. This is a bad habit. No one should become a peeping tom like Joseph. We know how mischievous and playful Joseph is, so let’s excuse him for now. Ahem. Nevertheless, this one is really one of the funniest quotes by Joseph Joestar.

Top 7 ‘Underrated K-dramas’ of 2021 to Add to Your List Immediately!