Zac Stacy, the former NFL player is charged with two felonies after beating his girlfriend harshly. 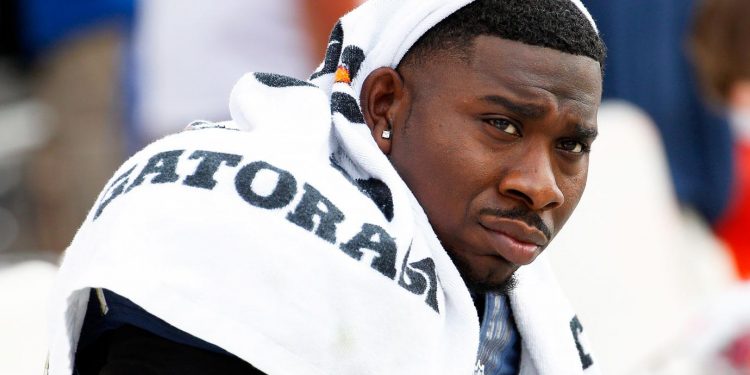 A disturbing incident shook the whole state of Florida after the emergence of video footage featuring, Zac Stacy, a former NFL player beating his ex-girlfriend brutally. Later on, he was already on the run when his ex-girlfriend called the police for help. He got arrested after his ex-girlfriend took the help of social media and shared the clips. Many of Zac Stacy’s former team members are very much condemning the actions of the player. Furthermore, it is not the first domestic violent action of the former player. The Police stated that they had received two such disturbance calls from her home since August. Unfortunately, his actions got caught in the surveillance video this time.

Meanwhile, Zac was visiting his ex-girlfriend’s home to meet his five-month-old son. He also said to his son, I love you in the video right before his disappearance. Now, the former NFL player is charged with two felonies against him. He is also asked to stay away from the victim and the Florida state in the meantime. The Judge also ordered him not to keep any firearms or weapons before granting his bail bond. His ex-girlfriend requested the judge to set a higher bail bond to which the Judge refused.

Former NFL player, Zac Stacy, was seen beating his ex-girlfriend, Kristin Evans, brutally in an emerging captured video. The incident took place on November 13, 2021, at the home of his ex-girlfriend in Florida’s Oakland. Furthermore, their five-month-year-old son was also present some feet away from them while Zac was attacking her. An argument took place between Zac and his ex-girlfriend. He became aggressive and furious when they were arguing. In the video, it is seen how he instantly picks and swings her head while she was sitting on a couch near her son.

Then, Zac tossed her across the room upon which she hits herself on the TV. Instantly, the TV also falls on top of his ex-girlfriend. She tries to talk to Zac and calm him down. However, he again comes down to her and throws something at her. Later on, he goes off into a corner angrily. His ex-girlfriend was heard begging Zac to stop throughout the whole video. Kristin immediately called the police after the argument. However, he fled the scene even before the arrival of the police.

Zac Stacy got arrested on November 18, 2021, in Florida while he was on the run after beating his ex-girlfriend brutally. His girlfriend not only called the police, but a surveillance camera on her home captured the whole incident. Later on, she posted the video footage on Facebook, asking for help from the people for sharing the footage as he was yet to get apprehended during that time. His arrest took place a day after the emergence of the video on social media. Later on, the Oakland Police Department stated about him feeling the scene and the state.

The Department also issued his arrest warrant after the footage’s review and charged him with criminal mischief and aggravated battery. The arrest warrant also states how Evans was picked up like a rag doll by Stacy. It leads to several injuries on her legs, face, and torso. He was taken to the Orange County Jail after being arrested. Local Police took him into custody at Orlando International Airport. Oakland police also mentioned after his arrest that the former NBL player came to Florida again with intention of surrendering himself.

Zac Stacy’s ex-girlfriend files a restraining order against him following the incident. A judge signs the same and grants it to her. Furthermore, Zac is not allowed anymore in Florida state except in court appearances. Furthermore, Evans has been kept in an undisclosed safe location until the court sets a date for the hearing. The court also ordered Zac to stay away from his ex-girlfriend and surrender his passport. Evans also asked the court to increase Zac’s bail bond, considering her permanent brutal and emotional injuries. However, the judge did not do so, considering the cooperating behavior of Zac with the case.

Also Read: Who is Zac Stacey Dating? The NFL Player is sentenced to 15 years of imprisonment

Tiktok vs Youtube Fight Boxing: Here’s what we know

Who is Ryan Porteous’s Girlfriend? The Footballer’s Personal Life