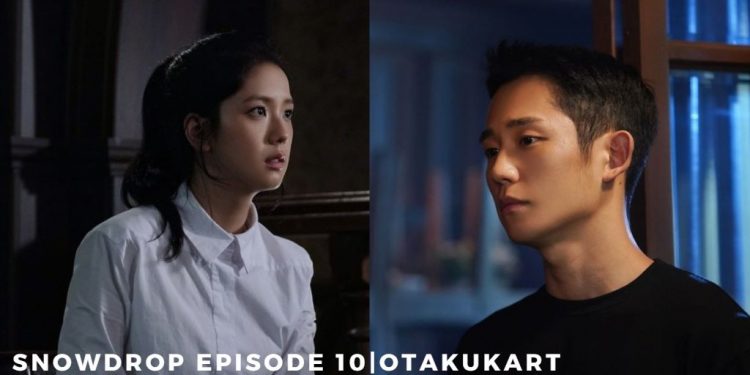 Snowdrop Episode 10 will drop a major bomb on its fans. If you have watched the previous episode of this thrilling romance kdrama, then you know what we are talking about. Furthermore, the previous episode of Snowdrop was packed with action, romance, and teamwork. It’s safe to say that after watching the latest episode, we are all over our ‘we hate Kang Moo and Lim Soo Ho phase’. Ever since the beginning, Lim Soo Ho and Kang Moo were not in the audience’s good books. But after seeing how Kang Moo is risking everything he has in order to save the hostages and was also the first one to ask Soo Ho to join hands, fans cannot help but love him. We also got a little peek into Pi Seung Hee and Kang Cheong Ya’s past.

The real identities and intentions of these two femme Fatales have been a mystery ever since day one. Fans had a lot of theories about them. However, the craziest of all is that Kang Cheong Ya has feelings for Lim Soo Ho. In Kang Cheong Ya’s flashback, we see her asking Lim Soo Ho for the dove necklace that his sister gave him. Although he refused to give it to her back then, she is surprised when she sees Eun Young Ro wearing the dove necklace. The romance is complicated but definitely not as complicated as what the higher-ups are planning. Does the South want to save its hostages? Does the North want to save its loyal officers? or Does the South only care about the elections and the North about the money? Find out in Snowdrop Episode 10.

What to Expect From Snowdrop Episode 10?

Fans cannot wait to see who escaped the bombing in Snowdrop Episode 10. Just when we thought that everyone would be able to escape, Kang Cheong Ya said no. Additionally, Kang Moo, despite being the leader of ANSP, made various attempts to convince Lim Soo Ho to save not only the students but also the North Korean spies. After he got shot by his own team members while trying to escape, Kang Moo literally had an identity crisis. Knowing that both the countries have made a deal and probably have zero concerns about whether the students live or die, he refused to do anything.

Additionally, he also involved Pi Seung Hee in his plans. At first, she refused saying that the ANSP is trash and only uses the fear of the week to climb up the ladder. But Pi Seung Hee was ready to give it a try if the students could be safe. The hostages have discovered who Dr. Kang Cheong Ya really is. We cant wait to find out how Nam Tae Gil is going to react to this piece of news. Moreover, Jung Ha Na is being held captive by the ANSP. After the blast, a lot of hostages are either severely injured or either dead. With trouble guarding all the exits, is there an escape for the hostages and the spies? Tune in to watch Snowdrop Episode 10 to find out.

Yoon Mi Hyun’s magnificently written storyline is finally unraveling to be the masterpiece that it is. Additionally, Snowdrop Episode 10 will be released on the 15th of January. The action and romance have both picked up their pace in Snowdrop. Relationships that the audiences never saw coming are beginning to bloom. And with the bomb going off inside the Hosu University dorm, the killing of thirteen young virgins is slowly turning into a sad reality. Just like the creators had mentioned countless times, Snowdrop has moved far past its controversy. This action-packed kdrama releases a new episode every Saturday and Sunday. So do not miss out!

Where to Watch Snowdrop Episode 10?

Snowdrop Episode 10 will be airing on jTBC at 10:30 pm according to Korean Standard Time. Additionally, for the viewers located outside of South Korea, the timings are 1:30 pm in the United Kingdom, 8:30 pm in the United States, 12:30 am in Australia, and 7:00 pm in India. Furthermore, Snowdrop is the first kdrama being exclusively released on Disney+. The latest episodes of Snowdrop are available to watch on Disney+ with subtitles in various languages such as Malaysia, New Zealand, Hong Kong, Thailand, Australia, and South Korea.