FIFA 22 Ultimate Team: Who Are The Headliners Team 1?

FIFA Ultimate Team is one of the most popular modes of FIFA 22 and EA recently released the FIFA 22 Headliners Team 1 Cards. So let's take a look at the new special cards. 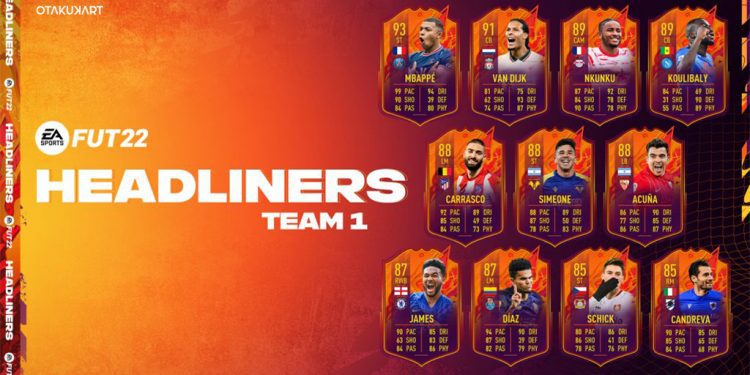 EA recently announced the first batch of their new special cards for FUT, and these cards are called FIFA 22 Headliners Team 1. Thus, fans are eager to know more about these new special cards. Undoubtedly, FIFA 22 is one of the most popular sports simulation video games, which came out on October 1, 2021. Further, it is the successor to FIFA 21 and the latest installment in the Electronic Arts’ FIFA series. Like previous FIFA games, it also features different game modes for the fans to enjoy. Further, this game features all real-life players and clubs literally. But some of the clubs and tournaments had their name altered in this edition because of license issues.

Fans can enjoy this game both as a single-player and as a multiplayer. They can go up against different football clubs using their favorite club. Further, players can also create their own character and experience a 25-seasons long career mode as a footballer or manager. FIFA 22, like previous versions, also features an online multiplayer mode called Ultimate Team. Here fans can build the best team and take on players from different corners of the globe. Also, EA releases unique player cards with boosted stat every then and now, and having them on the squad can be a great advantage. Today we will talk about the FIFA 22 Headliners Team 1 in the Ultimate Team mode.

What Are The Headliners In FIFA 22?

The online multiplayer mode of FIFA 22 is called the Ultimate Team, and fans can manage and build an incredible squad. But to create a team, the fans need to collect player cards. The player cards in FIFA 22 are usually divided into three prime categories: gold, silver, and bronze. Gold Card players have a rating above 75, whereas players ranging between 65 and 75 are Silver Card players, and below that range is the Bronze Card players. However, FIFA 22 also features some unique variants of these cards, with higher ratings with boosted stats. One of those variants is the Headliners.

They've turned the 🌎 of ⚽️ upside down this season. Now it's time to write a whole new year of headlines 📰#Headliners are Special Player Items that are upgraded with the potential for more based on individual & team performances 📈

EA released Team 1 of the Headliners card series on the last day of the year 2021, Friday, December 31. These cards feature those players who were the most in-form in this season so far. Further, the player featuring in this form receives a dynamic boost and also has the potential to get an upgrade on these boosted stats depending on their and their respective club’s performance in the remainder of the 2021/22 season. Also, there is speculation that EA will announce their FIFA 22 Headliners Team 2 cards during the first or second week of January 2022.

Also Read: Madden 23- When Will It Release? Cover Athlete & Features

The Frenchman is undoubtedly one of the best young talents in the world right now. He’s only 21-year-old but has already become a key part of the starting XI in the French giants, Paris Saint Germain, and the French National Team. Further, his performance this season for the club and the country earned him the special variant of a Headliners card in FIFA 22 Ultimate Team. Also, this special card is two ratings higher than his regular 91-rated Gold Rare Card.

Football experts and fans refer the Liverpool Number 4 as one of the greatest defenders, and the best currently is there in the sport. The Dutch defender is known for his leadership, defensive skills, and abilities in the air. Therefore, he leads both his club Liverpool and the national team, Netherlands. Van Dijk is also the only known defender to ever bag a UEFA Player Of The Year Award. Like every season, his performance this season was also phenomenal. Thus, he also received a boosted 91-rated CB FIFA 22 Headliners Team 1 Card for Ultimate Team.

Nkunku is a French footballer who plays for the Bundesliga club RB Leipzig. He’s only 24-years-old but has already made his name known throughout the world as one of the best-attacking midfielders. Therefore, EA presented an 89-rated CAM Headliners Team 1 card for Nkunku because of his performance so far in the season.

The Napoli footballer is one of the best center-back in Serie A playing for the Italian club Napoli. His form this season playing for both club and the national team of Senegal has been phenomenal. Because of his outstanding form so far in the 2021/22 season, EA presented a boosted 89-rated CAM Headliners card for the Senegalese defender.

The Belgian winger’s dominance in the left-wing has been mind-blowing this season. He helped his club Atletico de Madrid in the Spanish league La Liga and also in the major tournaments like UEFA Champions League and Copa Del Rey. He also helped his national side, Belgium, to qualify for the FIFA Qatar World Cup. Further, he already has an 84-rated LM Gold Card in FIFA 22. But after his marvelous season, he received plus four boost Headliners Card.

The Argentine Striker is the son of the great Argentine manager and former player Diego Simeone. He plays for the Serie A club Cagliari. However, he’s been on loan at another Serie A club Hellas Verona. His performance this season for the club was phenomenal. Further, his form in the ongoing 2021/22 impressed EA, and thus they gave him a major boost. Simeone, who has a 75-rated ST Gold Common Card, received a special FIFA 22 Headliners Team 1 card which gave him a plus 17 boost on his normal rating.

The Sevilla full-back is one of the best left-back in La Liga and his performance this season for the Spanish club was just over the top. Because of his major contribution, the Spanish club currently ranks second on the La Liga table. Because of his performance on the left-back, he also received a boost in FIFA Ultimate Team. As Electronics Art gave him a plus-four boost over his regular 84-rated Gold Card with the Headliners Team 1 Card.

The English defender is one of the best young players from Chelsea’s youth academy. After his successful campaign in the youth division, he showcased his potential at the senior team. He is already a key figure in Chelsea’s starting XI, and his performance this season for the English club was mind-blowing. Further, James has an 81-rated RWB Gold Rare Card. But the ratings got even better for Reece after he received a major plus six boost with his new Headliners Card.

The Colombian winger is having a phenomenal season in 2021/22. He is one of the key figures in the Portuguese club FC Porto and the Colombian National Squad. Further, the 24-year-old only received an 80-rated Gold Common Card but received a major boost with the release of the Headliners in FUT. As he got an 87-rated LM Headliners Card.

The Czech professional scored 16 goals and assisted three so far in Bundesliga wearing the colors of the German club Leverkusen FC. He’s the best striker in Bundesliga after Robert Lewandowski at the moment. Looking at his great form, EA released a special boosted Headliners card for the 79-rated Gold common ST. Further, his Headliners Team 1 Card had an 85 rating.

The Italian plays on the right-wing for the Italian club Sampdoria in Serie A and the Italian national team. Candreva’s impressive form this season in Serie A helped him get a boosted special card in the FIFA 22 Ultimate Team. His general FIFA 22 Card is a 79-rated RM Gold Common Card. But with the release of the Headliners Card, he received an 85-rated RM card in Team 1.

Also Read: FIFA 22 TOTW 3: Who Are The Top Twelve Players?

Biao Ren: Blades of the Guardians: When Will it Release? Trailer & Story