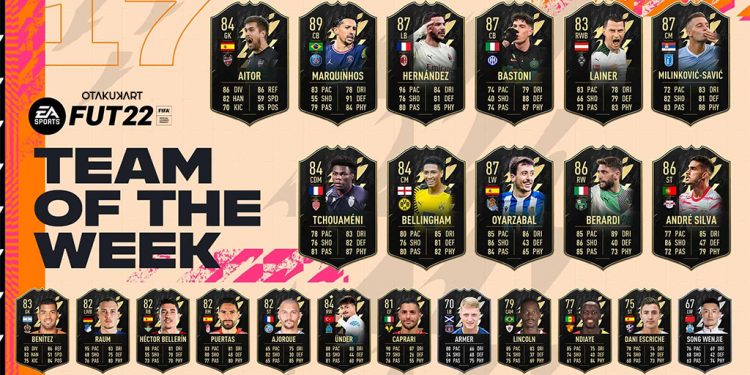 It’s already been 17 weeks since the reveal of the first Team of The Week in FIFA 22 Ultimate Team. Electronic Arts recently announced the latest FIFA 22 TOTW 17 cards. Fans eagerly wait for these cards to come out every week. Every FIFA 22 fan wants to know which players got themselves on TOTW and whether the fans should get these special cards for their squads. Let’s take a look at these FIFA 22 TOTW 17 cards and where to get these Team of The Week cards.

FIFA 22 is the latest installment in Electronic Arts’ infamous football video game series. The game came out on October 1, 2021, and became a massive hit like the past games in the FIFA series. Further, the game is playable as both single-player and multiplayer. There are many different modes available in both single-player and multiplayer. The game allows players to players control their favorite team and play against other real-life teams. Also, players can create a custom character and enjoy a 25-year-old career mode either as a football player or as a manager. FIFA fans can also build and manage a squad and challenge other players around the globe in the online multiplayer mode.

FIFA 22 features an online mode called Ultimate Team. Here players create their own squad and manage them. The gamers need to collect cards that feature real-life players, and gamers can use those players in a match. However, these FIFA player cards are generally divided into their types: gold, silver, and bronze. Gold Cards usually features high-quality players who have ratings above 75. But the Silver Cards features players with mediocre stats; usually, the rating range between 65 and 75. Below the Silver ones are the Bronze Cards. But the game also features some unique cards every now and then. The unique cards might feature some players but with boosted stats. One of those unique cards is the Team of The Week card.

EA releases a new set of Team of The Week cards every week. These cards feature those football professionals whose performance has been over the top last week in real life. These cards feature players with boosted stats than their original ones. FIFA players can get their hands on these unique cards by opening the FUT Packs. However, getting one TOTW 17 card from a pack is really rare, and thus, you might require a bit of luck to get one from a FUT Pack. But there is also another way to get a Team of THe Week card. Players can head to the Transfer market, where some other players might have put up their TOTW cards for sale, but they might be pretty expensive and cost you a lot of the FIFA currency.

Also Read: FIFA 22 Ultimate Team: Who Are The Headliners Team 1?

The FIFA 22 TOTW 17 came out on January 12, 2022. Electronic Arts released a new pack of Team of The Week, featuring a starting XI and twelve players for substitute and reserves. Each week new footballers feature on this card, but sometimes some players appear more than once on TOTW in a year. Players from different leagues, positions, and countries appear on the TOTW cards. Let’s take a look at those who made it in the FIFA 22 TOTW 17 and also their ratings.

The Substitutes and Reserves

These players showcased magnificent performances for their club in the respective leagues. Further, these players’ performance is not limited to the leagues but also in major tournaments like UEFA Champions League, Carabao Cup, Copa Del Rey, and Copa Libertadores. These FIFA 22 TOTW 17 cards will only be available for this week, so get them before EA announces the TOTW 18 cards.

Also Read: FIFA 22 Ultimate Team: Who Are The Headliners Team 2?