Tanjiro headed back with Nezuko and met with Lord Tengen Uzui, former Shinobi. 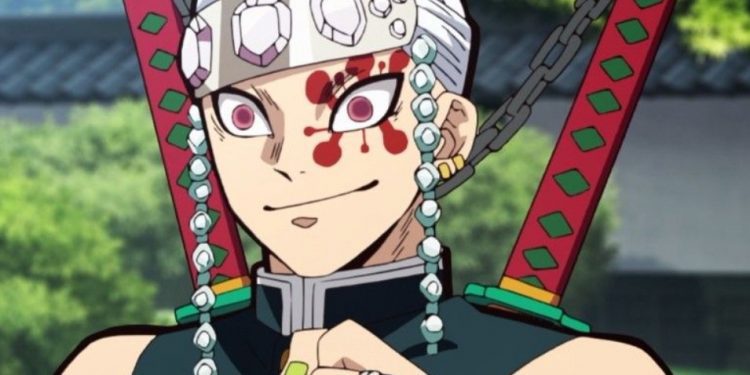 Flame Hashira vows that he will not let anyone die and uses Flame Breathing Estoric Art to pierce Upper Three’s heart. After a massive explosion, the Mugen Train was on the ground, and Female Ninja Agents arrived at the scene, and their names were Kakushi. Inosuke appears where Flame Hashira was fighting and saw two blades pinned on the ground. But Flame Hashira appears on the other side with Tanjiro bowing in front of him.

Tanjiro shed tears, and Inosuke tells him that it is not time to cry since they have to train. Zenitsu was lying on the ground crying after seeing that Flame Hashira was on his knees, and he was bleeding. Senjurou receives a signal from crow and realizes that something has happened to his brother Rengoku. Tanjiro tried to kill Upper Three, who was running away, and pierce him with a blade, and reveals that the Demon Slayers will always be after the Demons. He scolds the Demons that they took advantage of darkness and attack at night. The other Demon Slayers receive a message from crows and notice that it is about Rengoku’s death.

The Demon Slayers decide to carry out Flame Hashira’s will. After a few days, the Mugen Train got fixed and was fully operational. The town has gone quiet after knowing about Flame Hashira’s matter. Later in the evening, the family talked about the bright kid, and they were glad to have a kid who was so gentled-mannered at a young age. The father reveals that he will let his son take care of his business, and the family doesn’t hesitate to agree with that. The visitors wish to trade their idiot son for that brilliant kid.

The family is worried that their boy cannot go out since he can’t stand the sun’s heat. But they decided to develop a medicine that would allow him to go out during the day. The boy inside the room is studying medicinal plants. Akaza arrives inside the room and calls that boy Muzan revealing a message. Muzan gets angry, asking if Akaza has brought what he asked for. Akaza reveals that he failed to locate the Blue Spider Lily, but he eliminated Flame Hashira. Muzan reminds Akaza that there is not only one Hashira, and he wants the Demon Slayer Corps to be annihilated.

Akaza accepts that he will get rid of all Demon Slayer Corps. Muzan is angry that there are the other three Demon Slayers, but Akaza is boasting killing Flame Hashira. Tanjiro and the others are mourning Flame Hashira’s death after the Female Ninja Agents took them to another town. The Female Ninja Agents took care of them until they fully recovered. One day, a Crow tells Tanjiro to destroy the Demons rampaging at the mountains.

In the morning, Tanjiro headed back with Nezuko and met with Lord Tengen Uzui, former Shinobi. Tanjiro tells him that they will join him to leave Aoi since he needs members for his mission. Let’s meet when Demon Slayer: Kimetsu no Yaiba Mugen Train Arc Episode 9 is released.