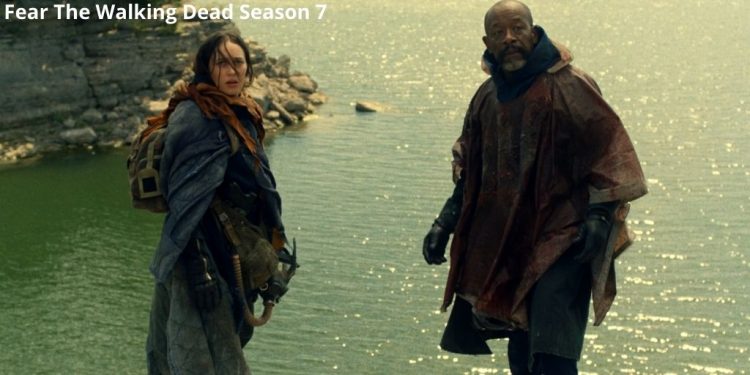 The story is about to get a whole lot interesting in Fear The Walking Dead Season 7 Episode 9 after what went down in the recent episode. We saw a prominent character make her appearance on the show. In addition to that, we saw flashbacks from her past that completely changed her as a person. Meanwhile, she sent her people to find Morgan so he could help her get to a secret location that is supposed to improve the way of living for everyone. However, she and Morgan come across Strand, who has something else in mind.

“The Walking Dead” franchise has become quite popular since it first started on 31st October 2010. The first show in the franchise with a similar name became a huge success and paved the way for two more spin-offs. The first spin-off to the original show was Fear The Walking Dead, and it has been quite successful as well. Moreover, we have seen a lot of characters from the original show crossover to this one. The well-known television producers and writers Robert Kirkman and Dave Erickson have jointly created the show.

In addition to that, they are also the executive producers of the show. Meanwhile, the other executive producers include Scott M. Gimple, Andrew Chambliss, Ian Goldberg, David Alpert, Greg Nicotero, and Gale Anne Hurd. Whereas the star cast of the show includes Alycia Debnam-Carey, Colman Domingo, Lennie James, Jenna Elfman, Christine Evangelista, and many more. The show is going on strong with the seventh season, and now the fans are eager to watch Fear The Walking Dead Season 7 Episode 9. However, let us first take a recap of the previous episode and find out what all happened.

Episode 8 of Fear The Walking Dead Season 7 came out on 5th December 2021. Furthermore, the episode was titled “PADRE”. The episode began with a flashback of Alicia when Tedy had locked her inside the fallout bunker to lead the people there for a better world. However, she was desperate to get out and found a young man named Will who was willing to her get out. Meanwhile, in the present, we saw a completely changed Alicia leading a group of people and helping them survive. She had sent out her people to find Morgan and asked him to help her with something when she finally met him. On the other hand, the men from the tower were on a hunt for Morgan, who had tried to kill Strand back at the tower.

Here, Alicia was trying to find the secret safe location called PADRE that would help people survive and form a better world. However, Morgan tried to convince her that that place was not real but still was helping her. Whereas Alicia was using a walker who was once was the Senator to lead them to the place as she believed that walkers do remember some things. Although, Strand found them this time, and when he saw Alicia, he wanted her to join the tower to help him run it. But she refused it, which hurt him. So he decided to feed Morgan to the walker and then kill him, but Alicia came in the way and got bitten.

We saw another flashback as to how Alicia and Will decided to escape by following the same walker, but things went bad, and Alicia got bitten by the walker. Although, Will saved her as she had amputated her own arm. Meanwhile, in the present, she had a steel arm with her own bones attached to it. Morgan and Alicia followed the walker but eventually, it lead them to the tower. Soon Strand arrived there and was about to make a deal with Alicia for protecting her people at the tower. But then Alicia saw Will, who was now a walker near the tower. She figured out it was Strand who did it. Meanwhile, Strand also confessed that he did it to hurt her so she would come to the tower. Although, it backfired in his face as Alicia got furious and declared war against him.

The previous episode ended on a really exciting note. Now, this has got the fans hyped up to find out what’s coming next. However, “Fear The Walking Dead Season 7 Episode 9 does not have a confirmed release date as of now”. The previous episode was the mid-season finale of this season. Therefore we will have to wait a little longer for the next episode to arrive once the season resumes after a break. Meanwhile, the show has already been greenlit for Season 8, which is another reason for the fans to rejoice. However, it will be quite interesting to watch what happens between Strand and Alicia. She already hated him for a lot of things but seeing what he did to Will has infuriated her even more. Meanwhile, Strand has a soft corner for her. So will he be able to do what’s necessary? Stay tuned to find out.

This gave us chills! #FearTWD pic.twitter.com/6mmvwWx4wo

Once again, the ongoing zombie apocalypse tv series has gained a lot of attention from the viewers. That is why the viewers are wondering about where to watch Fear The Walking Dead Season 7? The answer to that question is a rather simple one. “Fear The Walking Dead Season 7 airs every Sunday at 9 pm ET on AMC in the United States.” Meanwhile, the viewers can watch the upcoming episode a week earlier on AMC’s streaming service AMC+. Other than that, the season is available to watch on Youtube TV. Whereas the previous six seasons can be streamed on Hulu and Amazon Prime Video.