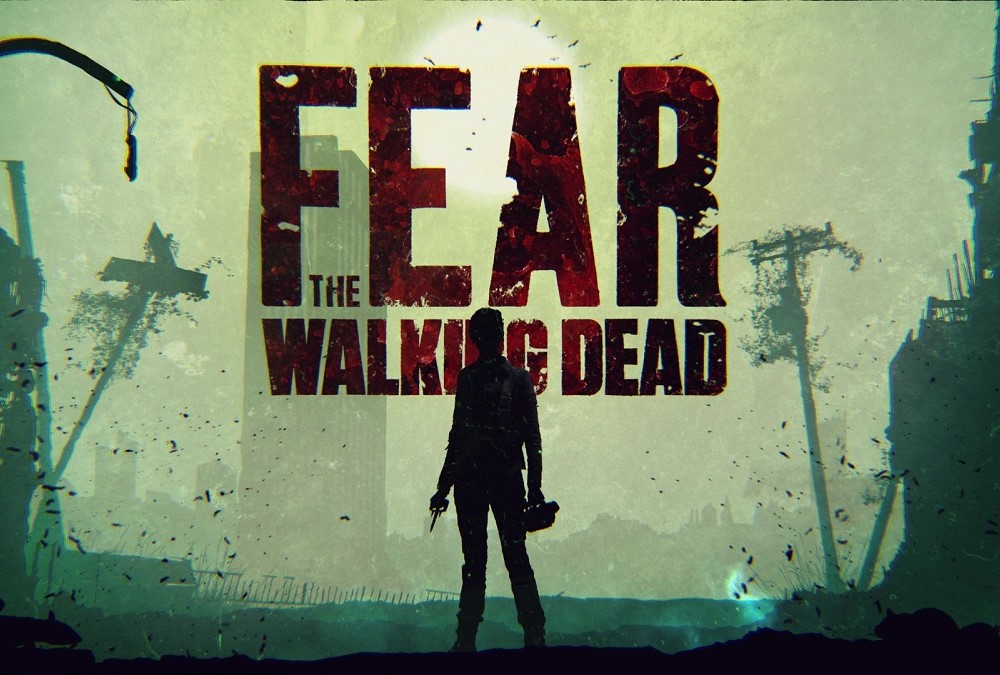 Fear The Walking Dead Season 6 Part 2 is coming out this week and here's all you need to know about it.

‘Fear the Walking Dead, ‘the American horror-drama TV series, has returned with the second part of its sixth season and will soon be airing its first episode. Created by Dave Erickson and Robert Kirkman, the show made its debut on 23rd August 2015. It received some extremely great reviews from the audience, with the critics also highly appreciating it. In fact, a total of 10,13 million viewers watched its premiere episode. Moreover, now the show has an average score of 75% on Rotten Tomatoes and an average rating of 6.9/10 on IMDb. Consequently, AMC renewed the series time and again for a new season. As a result, it will now be returning with the second part of its 6th season.

‘The Walking Dead’ is an American TV show created by Robert Kirkman and Dave Erickson. It runs in the genre of a zombie apocalypse, serial drama, and horror. The series is originally based on the comic book series with the same name (by Robert Kirkman, Tony Moore, and Charlie Adlard). In fact, it is a spinoff to the long-running AMC series ‘The Walking Dead.’ The show has released a total of 76 episodes to date over the course of six seasons, with each episode having an approximate runtime of 43-65 minutes. Square Head Pictures, Circle of Confusion, Skybound Entertainment, Valhalla Entertainment, and AMC Studios are its production companies with AMC Networks (US), 20th Television (International), and Entertainment One (International) as its distributors. 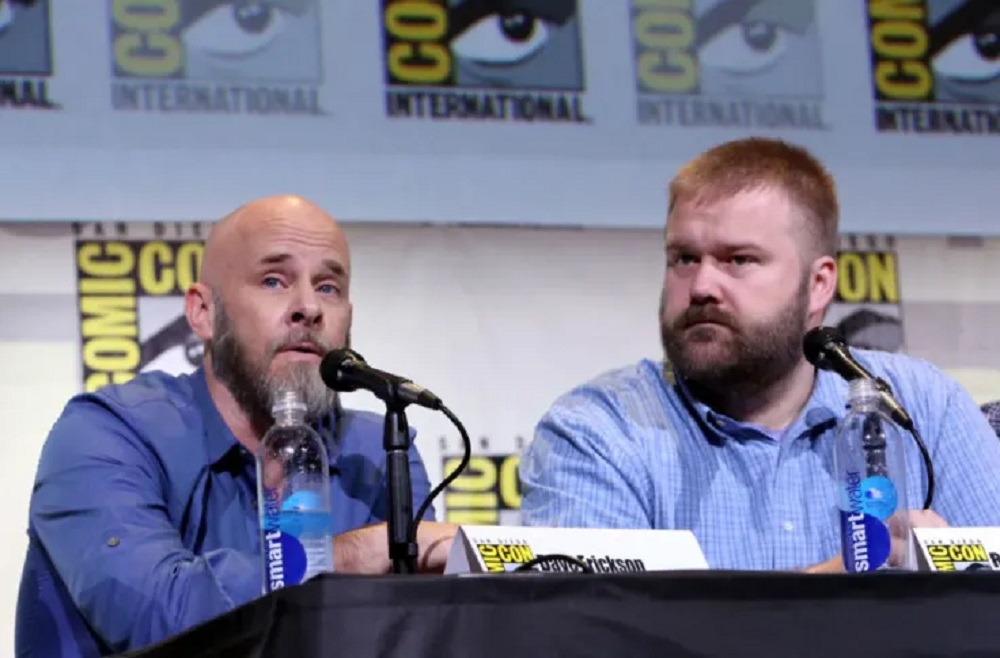 A still of Dave Erickson (left) and Robert Kirkman (right), the co-creators of ‘Fear the Walking Dead.

Lennie James as Morgan Jones: Lennie James is a British playwright, screenwriter, and actor. Some of his best works include “Jericho,” “Low Winter Sun,” and “Double Play.”

Maggie Grace as Althea “Al” Szewczyk-Przygocki: Maggie Grace is an American model and actress. She is popular for being a part of movies and shows like the “Taken” trilogy, “The Twilight Saga,” and “Lost.”

Colman Domingo as Victor Strand: Colman Domingo is an American director, actor, and writer. Some of his best works include “Euphoria,” “Lincoln,” and “42”.

Danay García as Luciana Galvez: Danay Garcia is a Cuban-born model and actress. She is best known for doing films and series like “Prison Break,” “Sniper: Ultimate Kill,” and “From Mexico With Love.” 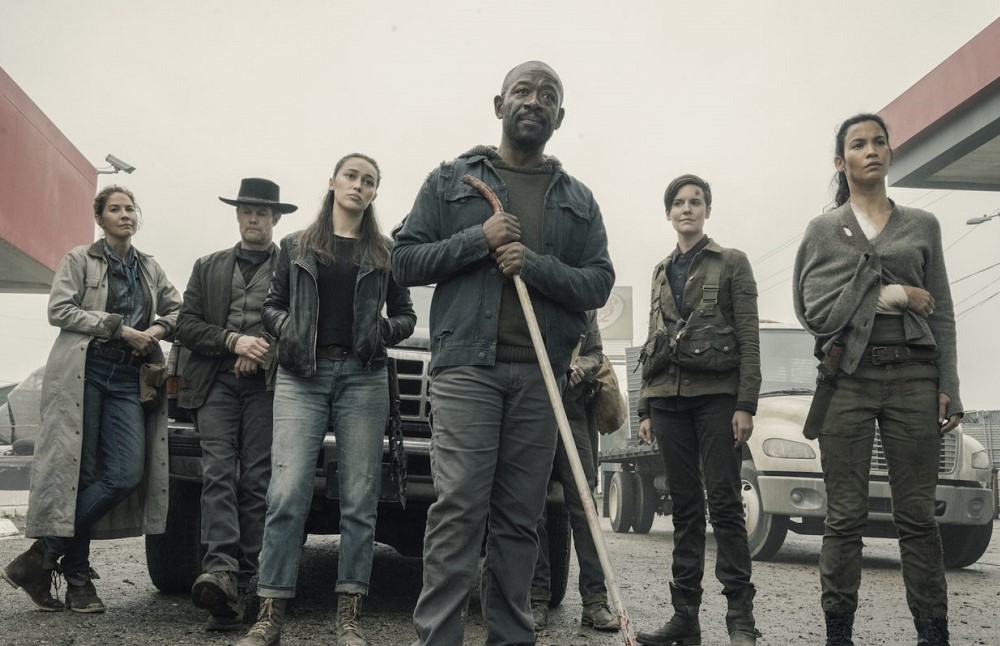 A still of a few members from the main cast of ‘Fear the Walking Dead’ Season 6.

Austin Amelio as Dwight: Austin Amelio is an American skateboarder and actor. Some of his best works include “Everybody Wants Some!!”, “Holler,” and “The Walking Dead.”

Mo Collins as Sarah Rabinowitz: Mo Collins is an American comedian and actress. She is best known for his works from “Mad TV,” “Cougar Club,” and “Flying By.”

Alexa Nisenson as Charlie: Alexa Nisenson is an American actress. Some of her best works include “Summer Camp Island,” “Fist Fight,” and “Middle School: The Worst Years of My Life.”

Jenna Elfman as June Dorie: Jenna Elfman is an American actress. Some of her best works include “Courting Alex,” “Friends with Benefits,” and “Love Hurts.”

The first part of Fear the Walking Dead Season 6 aired a total of 7 episodes from 11th October 2020 to 22nd November 2020. During the first part, we saw Alicia, Morgan, and the other survivors planning to travel to the new place that Morgan had been building. However, there was a little complication with that later. Strand decided not to go back to safety with his friends. In fact, he chose to go back to Virginia and her group of ruthless Pioneers. Consequently, it will be interesting to see how the story pans out in Part 2 of the sixth season. There are a lot of questions that were left unanswered. We will surely get to know more as the series airs on AMC soon. 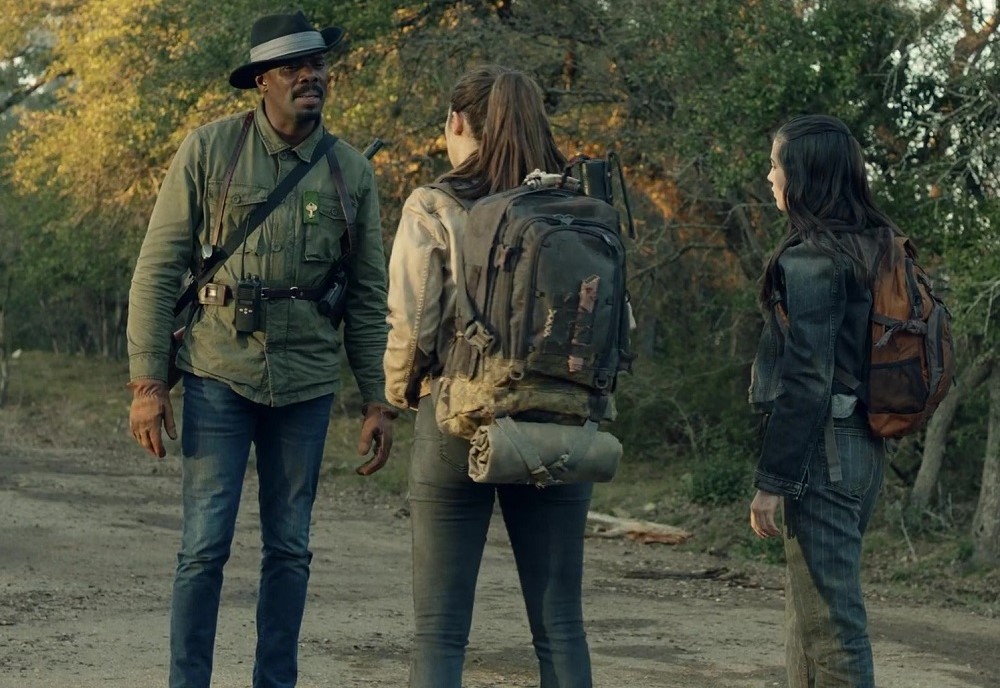 A still from the finale episode of ‘Fear the Walking Dead’ Season 6 Part 1 i.e., Episode 7.

The first episode of Fear the Walking Dead Season 6 Part 2 is titled “The Door.” In this episode, we will get to see Morgan trying to save the remaining members of his group as he deals with the effect of Virginia taking control of each group member. Then, the next few episodes will center around Virginia. She will set out to protect her Pioneers and find her sister. The stakes are definitely going to be high as the alliances and loyalties are going to change forever. The production has not released any official trailer for the soon-to-be-released Part 2. However, they did share a short video clip on their official Twitter account that you can watch below.

#FearTWD is coming in loud and clear for its return this Sunday or stream it now with @AMCPlus. pic.twitter.com/IxrAjxG530

Fear the Walking Dead Season 6 Part 2 will be airing its first episode i.e., the eighth episode overall for Season 6 on 11th April 2021 i.e., on Sunday at 9 PM ET. You can tune in to AMC at the time of the broadcast mentioned above to watch the episode. In case you miss the premiere, you can stream it later on the official website of AMC or its app. You can also buy or rent the episode a day after the broadcast on Amazon Prime Video, Hulu, iTunes, and Vudu. Below is the entire schedule for the release of Fear the Walking Dead Season 6 Part 2 Episodes.