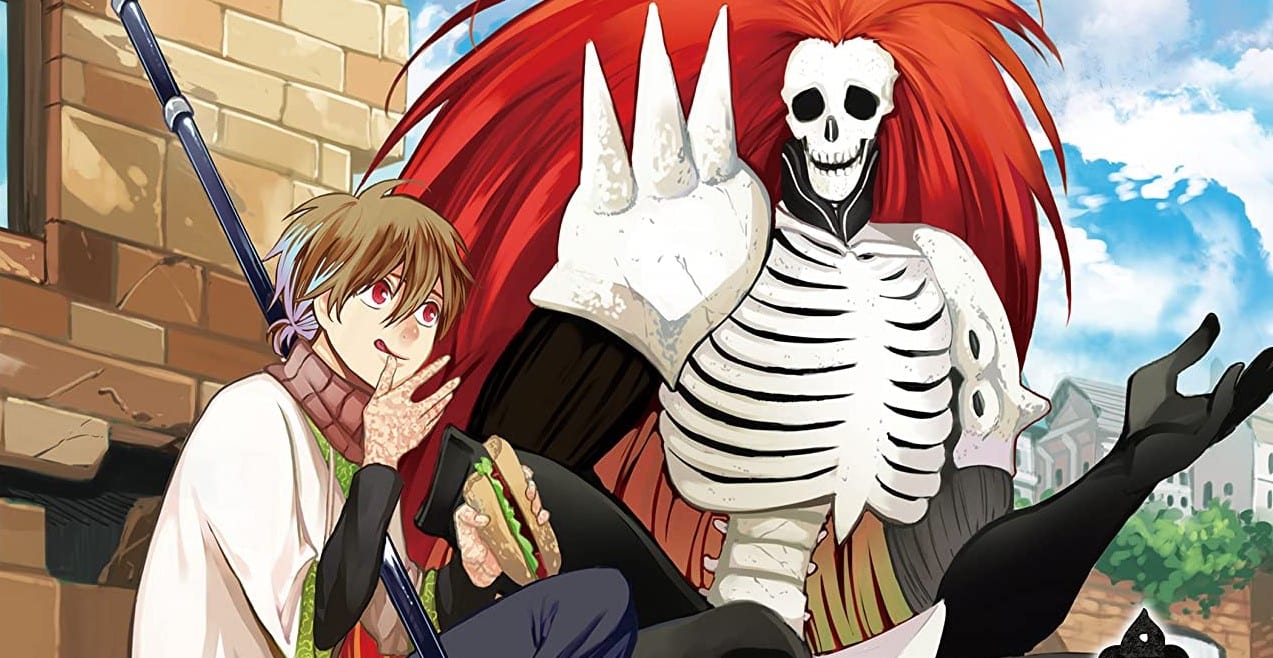 The Far Away Paladin

Taking a look at the Fall 2021 Anime List updates, a lot of shows have already been announced, with only a few shows left without official confirmation. The Summer 2021 anime season is on the horizon, and we will only be left with one more season for 2021. So it will help to wrap up what we should expect for Fall 2021 anime. The Fall season will be packed with great anime and will feature mostly new shows while it still retains some of the Summer remainders. So we will have a good build-up to 2022 towards the end.

At the moment, fans are looking forward to the Summer 2021 anime list as animes like That Time I Got Reincarnated as a Slime continues. There is still a lot to look forward to for the upcoming season. So to keep you updated, we have also compiled several lists for animes and movies you should look forward to. So on that end, there is a lot of upcoming developments for the remainder of the year.

The closest project includes summer anime and movies/films with movies like My Hero Academia World Heroes Mission on the way. We have already seen movies like Demon Slayer Infinite Train that was a hit. So there is still a lot on the way, and as usual, we will bring you their news and updates beforehand.

More anime might be announced for Fall 2021 as we are still several months away. But as things stand, we already have plenty of lists announced already. Just to catch a glimpse at what to expect for the season, we have shows like The Rising of The Shield Hero coming back for season 2, amongst other shows that we should expect.

Another title that we should not forget about is Bleach, so as we would remember, later last year, the official announcement was made that Bleach will return in 2021. So far, the anime is not listed for Summer 2021, so we are only left with Fall 2021.

Since the anime season is still months away, the listed anime will debut at the earliest in October 2021. And full details about these shows are yet to be revealed as the date and broadcast times. So as soon as new details emerge then, we will be bringing you more updates accordingly. Most of these anime will stream on popular sites like Crunchyroll, Funimation, and AnimeLab, let’s take at the Fall 2021 anime list released so far:

The Rising of The Shield Hero Season 2

It has been a while since The Rising of The Shield Hero Season 1 ended. The anime will return for the Fall 2021 Anime season and pick up from where season one left us. The debut is slated for October 2021.

This will not be an entirely new anime on the list. But it has been on a hiatus for a while, and fans were not sure if its fourth season’s adaptation will occur. Date a Live Season 4 will be returning to the screens after 7 years since the end of season 3. The new season will make its debut in October 2021 for the last season of the year.

Another one of the newcomers for Fall 2021. So it is another one of those Isekai anime that you should be looking forward to. The anime is scheduled for October 2021, and more details will be officially released later in the year.

Banished from the Hero’s Party, I Decided to Live a Quiet Life in the Countryside

Lately, most anime titles are just a description of what you should expect. This has become a norm in most anime, and you would find such style instead of just a short name. Apparently, that has become a thing for 21st-century anime and has brought in a sense of humor as such shows tend to trend a lot amongst the show. The anime is also a newcomer and will also debut in October 2021.

This will not be a new anime or season but will simply be a remainder from the summer 2021 season. It will make its debut on 1st August 2021 JST, and at the moment, it is not yet revealed how many episodes the anime will run for.

The end of the year will bring in several new anime to the screen, and this should be interesting to look forward to. The earlier announced Platinum end anime adaptation would finally come in the later stages of 2021. The anime is slated for 2021 in the meantime, and more broadcasting details like the Month and day of the broadcast will be revealed later as the time goes.

After the anime debut early in 2021, it will return for its second season just as the year ends. The anime will debut early in the season in October 2021 and continue with the anime’s storyline.

The Faraway Paladin offers a new take into anime as it looks into the story of a young boy who was raised by three undead. The anime seems interesting enough as it brings something new for the fall season. At this point, most fall 2021 anime are yet to receive broadcast updates, and the list is yet to expand as more shows are expected to be slated for the fall season.

Worl Trigger will return later in the year for its third season. World Trigger came back to the screens earlier this year after a very long hiatus saw the anime fans lose any hopes of it ever returning. But 2021 came with good news with a 12 episode season 2 running for Winter 2021. And now, later in the year, World Trigger Season 3 will make its debut in October.

Another take into romance and comedy will bring us My Senpai is Annoying later in the year. With anime like Uzaki Wants to Hang Out and Don’t Toy With Me, Miss Nagatoro already giving us similar experiences. “My Senpai is Annoying” will wrap up the year with yet another one in this genre in the anime. The series is set for an October debut as well.

Looking into the Mystery genre, Ousama Ranking takes a look at the life of Bojji, a deaf man who has befriended a literal shadow and is able to communicate with it. So this should be one interesting story as we all cant wait to see how such an interaction works.

A new adaptation will be coming for Shikizakura. The fall 2021 anime is yet to receive more anime adaptations as up to now, only the earliest of the animes are announced, which will debut in October. So as time goes, we also expect more shows to join in on the list.

On the anima that looks further into the future, SAKUGAN takes a look at a distant future where humans live in separate colonies. Introducing labyrinths where Markers explore and develop their own territories. The anime will debut later in the year with more updates like broadcast, trailers, and characters designs to be announced later in the year.

The Vampire Dies In No Time

On the darker side of the genre, The Vampire Dies In No Time will focus on an immortal vampire lineage and its nemesis, who is a vampire hunter. The story is surrounded by a funny character development of a simple vampire who dies easily but ends up joining some detective organization. The anime is set to premiere in October as well.

Restaurant to another world will join other animes in fall 2021 and return for a second season. The official Twitter account and website have also announced that they will carry out a retrospective distribution of the anime’s first season on  YouTube in July.

More like the drama genre, but later on, it turns into an interesting piece of work. Taisho Otome Fairytale follows a love story that happened 100 years ago when a banished Tamahiko had a fateful encounter with Yuzuki and ended up changing his life for the better. Broadcast is set for fall 2021 as well.

Focusing on the curses and darknesses, Requiem for the Rose King takes a look at the life of Richard as he is stuck on deciding between the world of the good and that of the evil. The anime is based on Shakespeare’s stories of the same name. Broadcast schedules and release date to be released later in the year.

One of the few anime’s whose release date has been fully revealed. Takt op. Destiny will be released on 6 October 2021. The anime’s teasers, visuals, and key arts have been released already.

Muv-Luv alternative takes place three years after the end of Muv Luv Unlimited, where Takeda could not come to terms with the new reality. He decides to join Professor Kozuki to try and complete alternative IV and help save humanity. More broadcast and plot details to be revealed later.

A newcomer for the season as well, Build Divide is also set to join the fall 2021 anime list. It is based on a “Build Divide” where anyone who wins and defeats the king gets any wish they have granted.

This Gundam-based anime will also broadcast in fall 2021 and will follow the life of Amou Shiiba, who loves machines. He encounters Gai, an autonomous thinking A.I. leading him into the battle to reclaim the 2061 AD Japanese nation that has lost its sovereignty.

Yuuki Yuna Is a Hero

The third season of Yuki Yuna is a hero has been slated for the fall 2021 anime season and will broadcast as soon as October 2021. More details about the season premiere will be released in due time.

This musical show follows the life of Yuki, who encounters a live music battle between two popular Bands. This inspired him to follow the music and became one of the band’s admirers. The anime will also debut in October 2021.

The anime has already released a promotional video and also officially announced on YouTube about the upcoming anime adaptation project. For now, the anime is set to premiere in October 2021, and more details will be communicated later.

Note that this is not a full list of all anime that will premiere in fall 2021. More anime is yet to be announced later on, and we will update this post accordingly. Other anime like Cardfight Vanguard OverDress will return for their season 2. The fall 2021 anime season is mostly filled with anime that are making their debuts. There are only a few shows that will be returning for an additional season. So it will be an exciting season filled with lots of expectations from the fans.