Netflix’s recent Kdrama Squid Game is peaking charts and breaking records every day. Squid Game will make you think twice before saying yes to a game due to its deadly concept encompassing some of Korea’s popular childhood games. The hit survival Kdrama is currently number one in all the Netflix available regions. Moreover, it is has won the game of becoming the best Netflix original the streamer has ever produced. Undoubtedly, the hard work of the crew and cast and the sharp mind of the writer and director are two significant factors behind its success. But, there are several Squid Game facts fans should Know.

Squid Game is a South Korean survival drama backed by Netflix. Hundreds of Korean citizens in dying need of money join a deadly game where the prize is 46 Billion Won, but death is the answer if you lose. With nine episodes, Squid Game has become the best series to ever debut on Netflix, surpassing the score gained by Bridgerton.

The drama is made with intricate details even though the fuss is all about children’s games. Hwang Dong-Hyuk- the director of the masterpiece, is known for his acclaimed work. But, it took years for him to bring Squid Game to screens. Many other Squid Game facts will blow your mind.

Here are the Squid Game facts you should know now.

Would you believe it if we told you that Squid Game was created almost 13 years ago? Well, it is true. The idea of Squid Game was created in 2008 by Dong-Hyuk, who was financially suffering back then. According to reports, he used to read comics like Battle Royale. And, he thought how it would be like to enter deadly games for the scrumptious amount of money. Sometime later, he came up with the idea of designing these games in a Korean setting. 13 years later, it is known as Squid Game.

2. Most Squid Games Are Based Out Of Children’s text Book in the 70s and 80s.

If you have seen Squid Game, you must know that none of the games are child’s play. However, most of them are adapted from Children’s textbooks in the 70s and 80s. Even the giant Doll of “Green Light, Red Light” game is from the books. The drama’s lead actress- Jung ho Yeon- told fans about the doll and her origin on “The Jimmy Fallon” show. You can watch the complete video here.

Also Read: Who is the Old Man in the Squid Game? Storyline & Cast Members

3. The Title and Key Game Are Inspired By Hwang’s Childhood

Hwang Dong-Hyuk has made the show with utter perfection. His life story and childhood have also influenced most sectors of Squid Game. According to many reports, Hwang chose the tile and the Key game from the real squid games used to play. Moreover, it was his favorite game to play as it mimicked society.

4. Squid Game Was Originally Meant To Be A Movie

Hwang Dong-Hyuk is one of the most critically acclaimed filmmakers in South Korea. Hence, his first approach towards Squid Game was to turn it into a movie too. While talking to Variety, the creator gushed how Squid Game was supposed to be a featured film. However, destiny had different plans. After a decade, Dong-Hyuk’s masterpiece came out as a 9 episode mini-series. It is definitely one of the enlightening Squid Game facts to register.

5. Jun-Ho Was Not Originally In The Story

Wi Ha Joon, who plays police officer Jun-Ho, wasn’t in the script, as told by Dong-Hyuk. While thinking about turning Squid Game into a film, Dong-Hyuk did not write the police officer role. He was brought to light after the series was put into production. It is indeed a strange Squid Game fact.

Also, did you know that the role of Ji-Yeong (Sae-Byeok’s partner) was written for a male character? But, the director thought that the “bond between two women will make more sense.”

We cannot deny that Squid Game is pure art. Even though it’s scary, but it is made with perfection. To make it look more professional, the production team hired a Dalgona expert. The second game in the show, where participants had to lick the candy to get its shape was one of the most challenging games. In an interview, the art director also shared that the dalgona candy is the most challenging prop to work with.

Hence, they had to invite a Dalgona expert who regularly made the candies while shooting the sequence.

7. You can Meet the Red Light, Green Light Doll in Real Life

The frightening doll from the “Red Light, Green Light” game exists in reality and can be visited in Jincheon County. It is a rural area located three hours north of Seoul. As per Koreaboo, the doll was borrowed for filming and returned after shooting. In reality, the doll protects the entrance of a horse-carriage museum.

8. The Guards Were Originally Supposed To Wear Boy Scouts Uniform

Can you imagine the Squid Game guards in anything else but the red suit? Well, it mind sound absurd right now. But, initially, they were supposed to rock Boy-Scout uniforms. This is an actual Squid Game fact, as many of you must not know about it. Hwang decided to change the costume as it displayed the men’s figure too well. And, it was getting against the logic of making them look like “Ants in an ant Colony.”

9. The Green Tracksuits Gave Allergies To The Actors

Another iconic Squid Game outfit contributes to the list of Squid Game facts. The Green tracksuits, which are now outsold worldwide, created havoc on the set of Squid Game. As per Hwang, the teal-green costumes were problematic for the actors to film in. Also, he compared the tracksuits to old gym clothes.

He shared that many actors faced difficulty breathing, while the others had their faces turn red because of the outfit. But, like the professionals they are, the actors pushed through the old and rugged costumes to film the best series streaming on Netflix right now.

10. The Dorm Rooms Give Insight To The Squid Game Played In The Show

The Dorm rooms in Squid Game were designed way ahead of their time. Beds initially covered the walls, but later, the viewers can see the doodling that served as the clues for the games played in the series. The art director of the show surely deserves a standing ovation.

Deaths were numerous, and they will all lead to making the viewers cry uncontrollably. Meanwhile, the viewers were mourning for the demise of their favorite characters; the black coffin which appeared at the end of their death had a symbolic meaning. Undoubtedly, the coffins with pastel pink bows creeped up out. But, as per Chae Kyung-sun, the show’s art director, she made it look like it from the point of view of the competition creator.

In Squid Game, the creator thinks as if he is God. And with power, he grants a final gift to the participants. For him, the bodies being cremated is a show of his mercy. Also, Hwang explained the story behind the pastel pink ribbon. He said that it was a combination of the “Hot-Pink” suits of the guards and Front-Man’s all-black attire.

Even this Squid Game fact creates an eerie feeling. 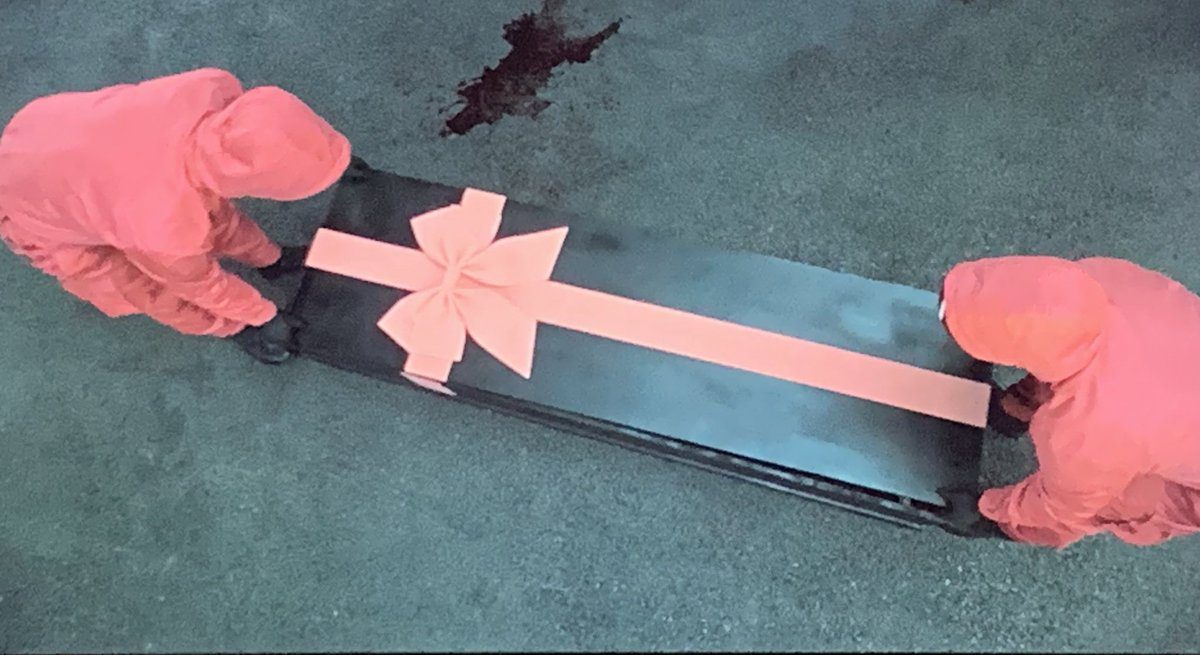 But, it still doesn’t change that Squid Game is more than a survival Kdrama. All the Squid Game facts and the drama itself indicate how class and society work in the modern world. If you still haven’t binged-watch the hit drama, watch it now on Netflix.