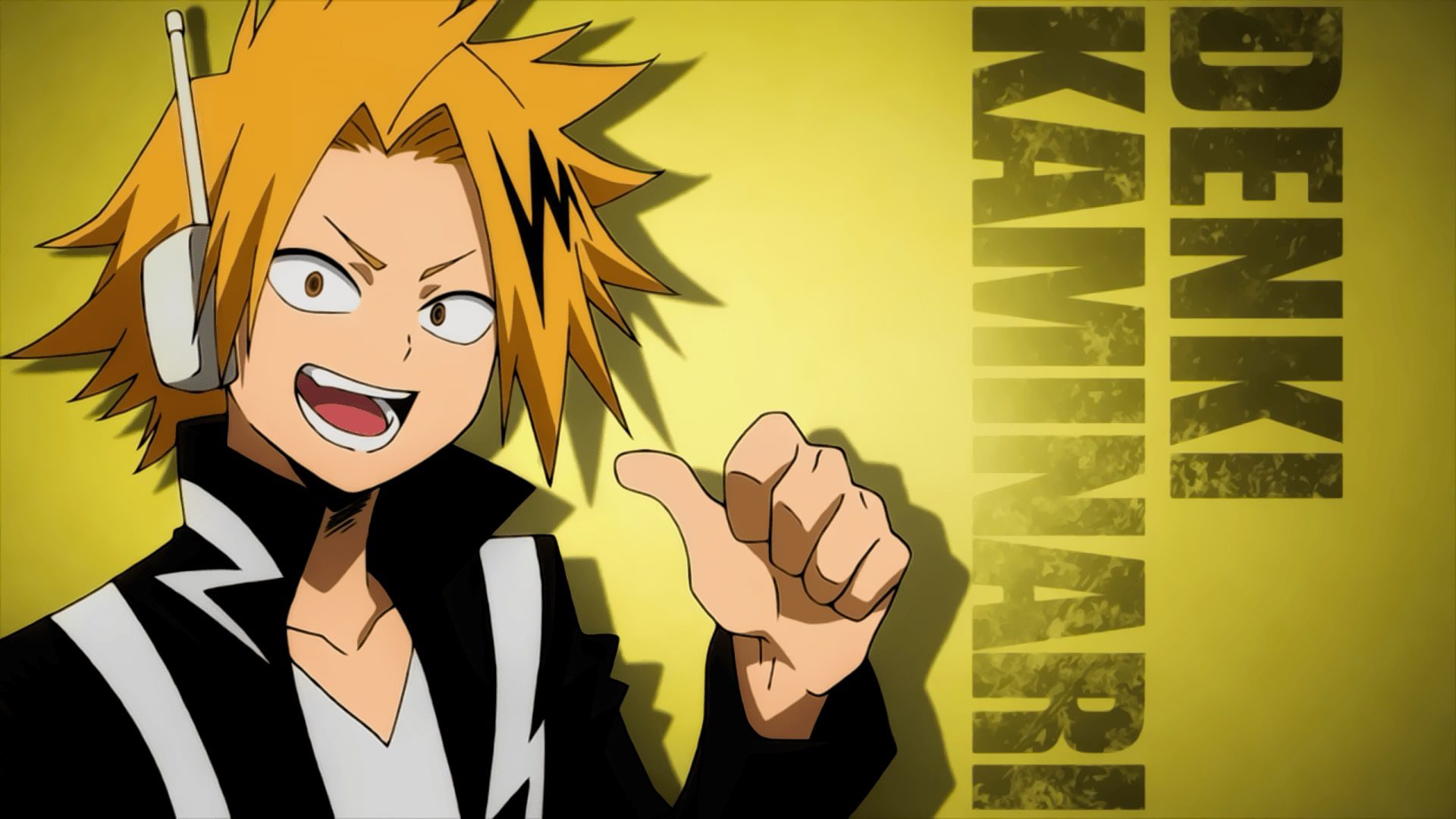 Denki Kaminari is one of the characters present in Class 1-A in UA. He is a character that we usually adore because of his quirkiness and smooth personality. But how much do we really know about this underdog hero? In this article, we will look into amazing facts about Denki Kaminari.

Denki’s hero name is Chargebolt, but he calls himself “Stun Gun Hero: Chargebolt”. His quirk lets him use lightning or Electrokinesis. His hero costume has a “trendy” look. He appears to be a lot like the Pokemon Pikachu turned human. His spikey yellow hair even has a lightning symbol which is very similar to Pikachu’s look. Kaminari has an amazing quirk that lets him electrify his opponents.

However, if overdone, he goes in his “short-circuit-dumb-phase,” wherein he literally cannot activate or do anything for another hour. He often is seen to be among the people with low grades, but when it comes to quick thinking, he is pretty smart. However, he often charges on the battlefield without a plan of attack. All in all, Denki is an adorable character who is pretty brave when it comes down to it. Let’s look into some cool facts about this Human Charger.

Denki Kaminari was born on 29th June. This makes his Zodiac sign Cancer. He is currently 16 years old, along with his classmates. But when he was first introduced, he was 15 years old. For a 16-year-old, he has a pretty average height of 5’6. Even his interest in having random things up in his room screams “messy-16-year-old-teenager!” 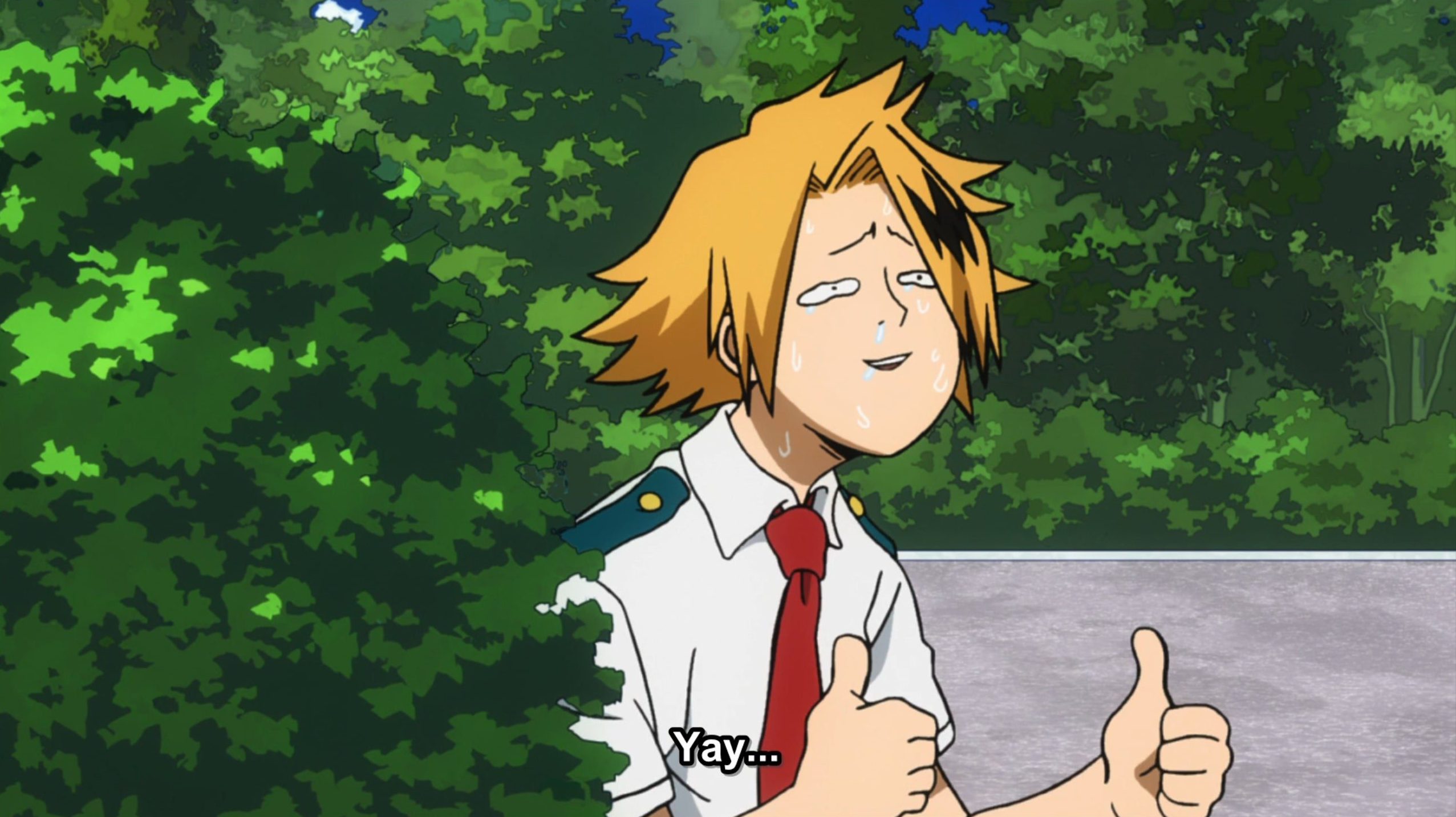 “Kaminari” is a term we have probably heard in many shounen action anime. Zenitsu from Demon Slayer, for instance, uses the “Kaminari no kokyu” breathing style. In Japan, “Kaminari” means “Thunder”. As for Denki, it can be divided into two parts “Den” meaning “Electric” and “ki” meaning “Spirit”. But usually, “Denki” as a whole is referred to as electricity. In short, his name sums up his quirk.

Surprisingly enough, from the Diplomats, Analysts, Sentinels, and Explorers, Denki fits in the Analyst category as his Myers Briggs Personality Type is ENTP. ENTP stands for Extroversion, Intuitive, Thinking, and Prospecting. Although appearing as one of the dumb-dumbs of Class 1-A, Kaminari has logical thinking abilities. ENTPs are also known to be debaters and innovators. This is clearly evident since Kaminari looks for ways to improve his costume, even thinking of turning his electrification into swords.

Interestingly, the other character with the same personality type in My Hero Academia is Hawks. This point is related to the last fact about him in this article, so keep going! Another fact worth mentioning is that ENTPs are very provocative beings, and this is something we will see in the next fact. 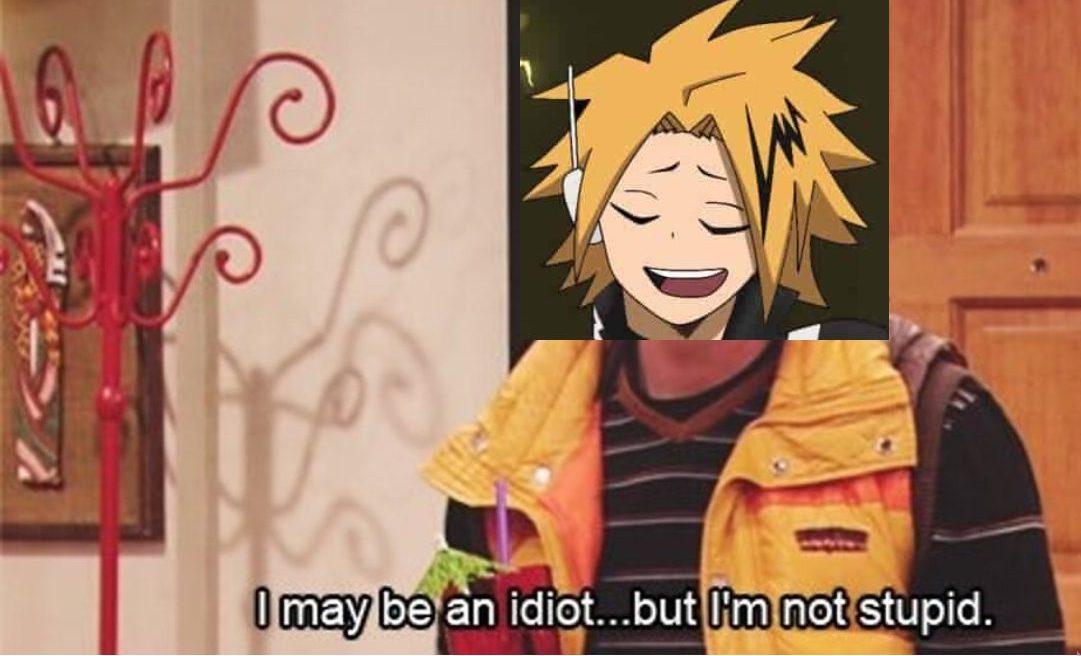 Denki has a mouth that never really shuts up, and he often says things without a filter. We love him for his witty comments (another ENTP trait). He is often seen sarcastically describing others. For instance, in the first few days when they all met, he used big words in a sentence only to let Bakugou know that he has a “Steamed Turd of a Personality”. Besides Deku, Denki is often seen calling Bakugou “Kacchan”. He is also very persuasive when it comes to him. Kirishima and he are the closest to Bakugou as they aren’t really phased by his rage. Even Deku was surprised at how Denki spoke to Bakugou. Denki is a character who isn’t really afraid of speaking his mind out. 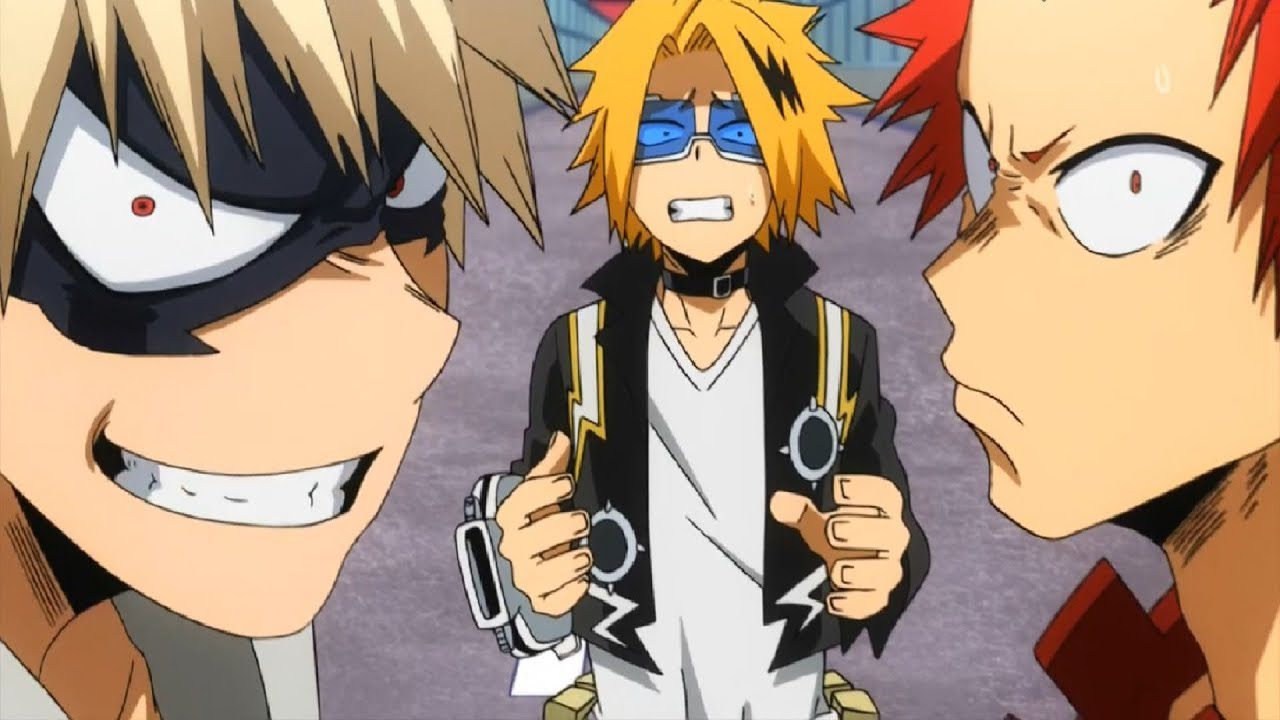 Initially, Denki’s character sketch looked scary. He had a mysterious look and was just some random Electricity user. His hair is very similar to what Present Mic’s hair is like now. Was he supposed to be a villain? We don’t really know, but it seemed so by his appearance. Well, we’re glad he is now the class clown of 1-A.

6. Denki can enhance his quirk depending on his surroundings

Denki’s electric quirk is pretty powerful on its own. But if he fights somewhere around water, he can enhance his quirks by using the water source. He can use his electricity on metal objects. This is where Denki’s quick-thinking abilities come to play. Although he may not be very good in a battle like Shoto or Bakugou, he has the ability to find his way out of difficult situations.

Their very first UA Sports Festival gave them a chance to prove themselves to Proheroes. During this time, these Proheroes would watch their performance and offer the best students with an internship offer. Although Kaminari did not do well in the one-on-one fight, he received about 272 internship offers. This put him in the 5th position out of 9 students from 1-A. 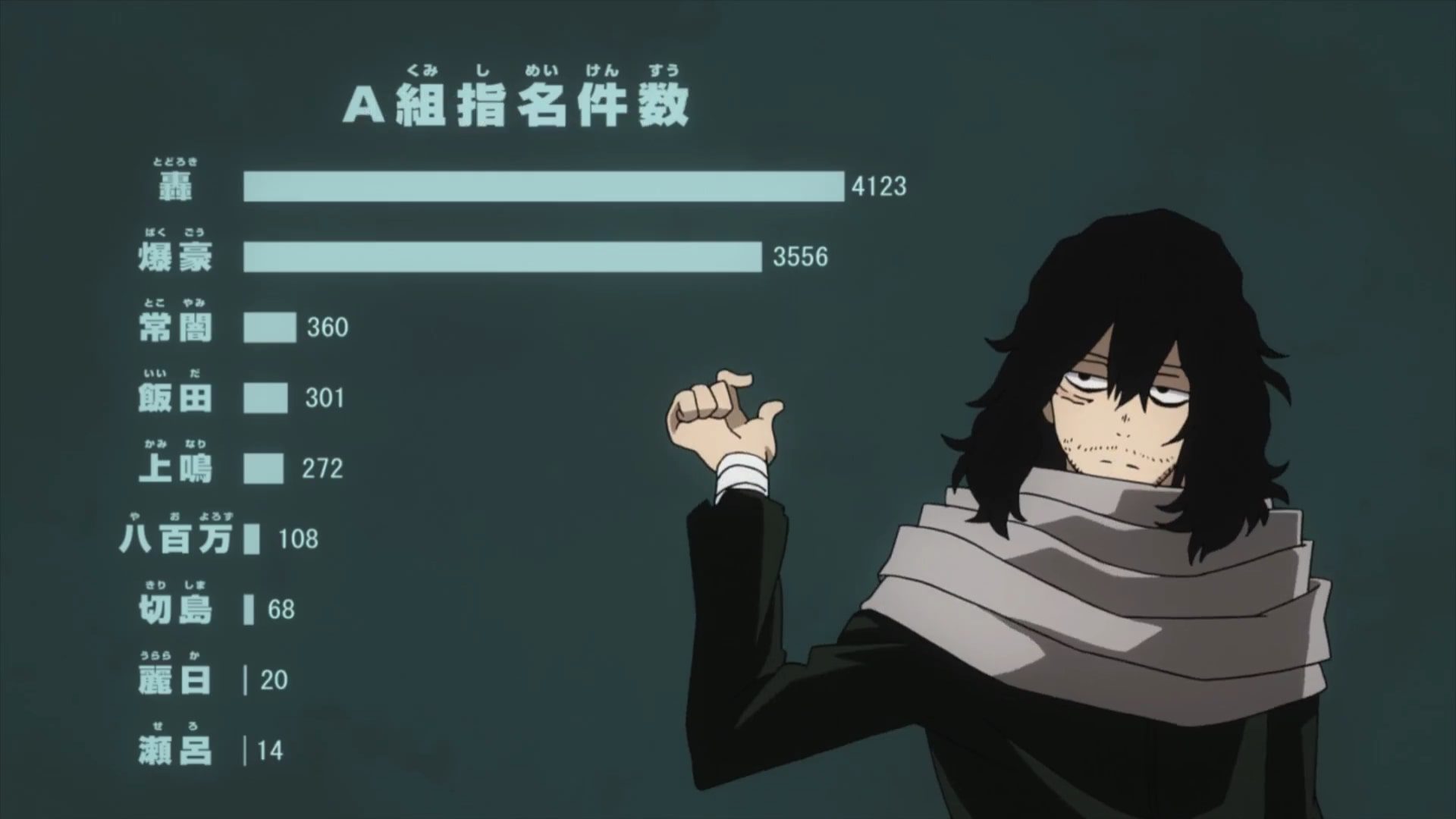 8. Denki is shown to be romantically interested in Uraraka

Denki once tried asking Uraraka out but was ignored by her as she went on to congratulate Deku. However, Denki did not get too much offended. He tends to be a smooth-talker when it comes to flirting. Although he hangs out with Mineta and joins him in his antics, Denki is much more considerate towards the girls in his class. He is friendly with everyone. Fans usually pair him up with Jiro. This is probably because he is closer to her than most of the girls in UA and has been her number 1 supporter before, which brings us to the next fact. 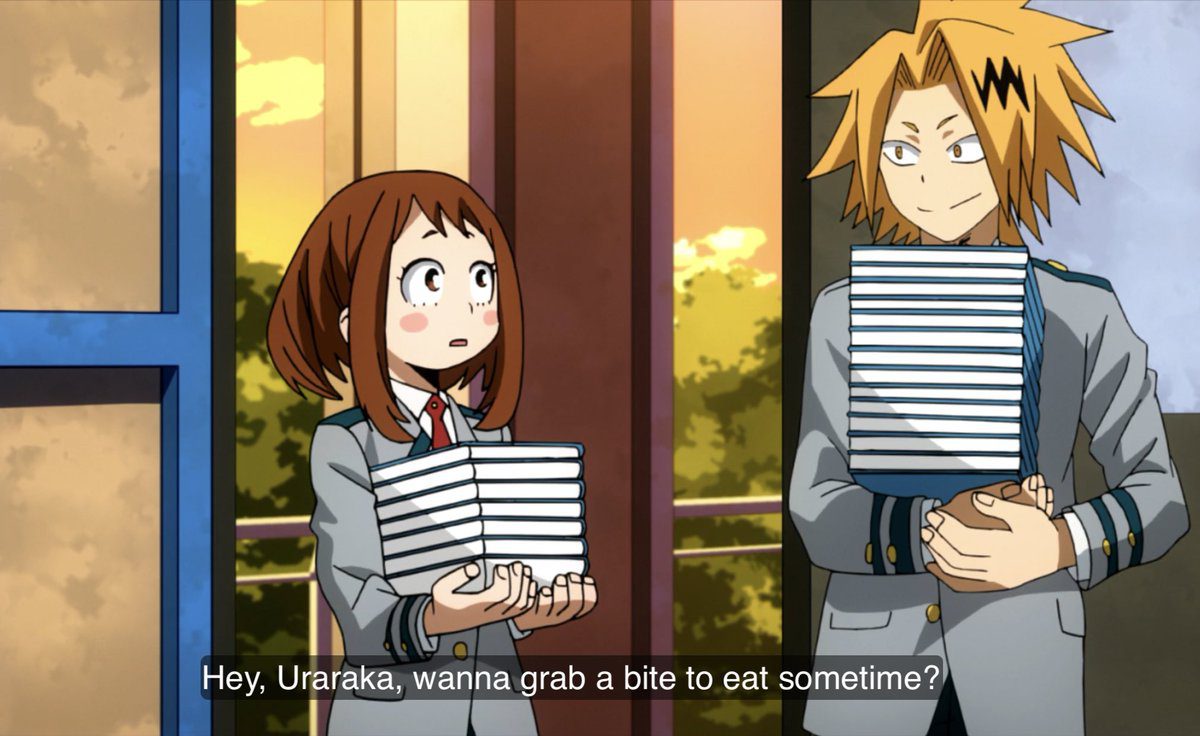 Yes, you read that right. Although he isn’t very smart or responsible, he has shown leadership abilities. For instance, he is a great motivator. When Jiro wasn’t confident about her singing, it was Denki who pushed her to go for it. He also is a good conversationalist and has a good vocabulary. Denki could be termed as a peace-maker in the class, along with Kirishima. He knows the difference between the right time to joke and the right time to be serious.

I mean, as I mentioned above, he even had his way with Bakugou even before Kirishima did. Denki has the ability to bind the team together. He won’t say this out loud, but he acknowledges the strength of each of his classmates. He also shows great concern for those around him when it comes to fighting with this quirk. 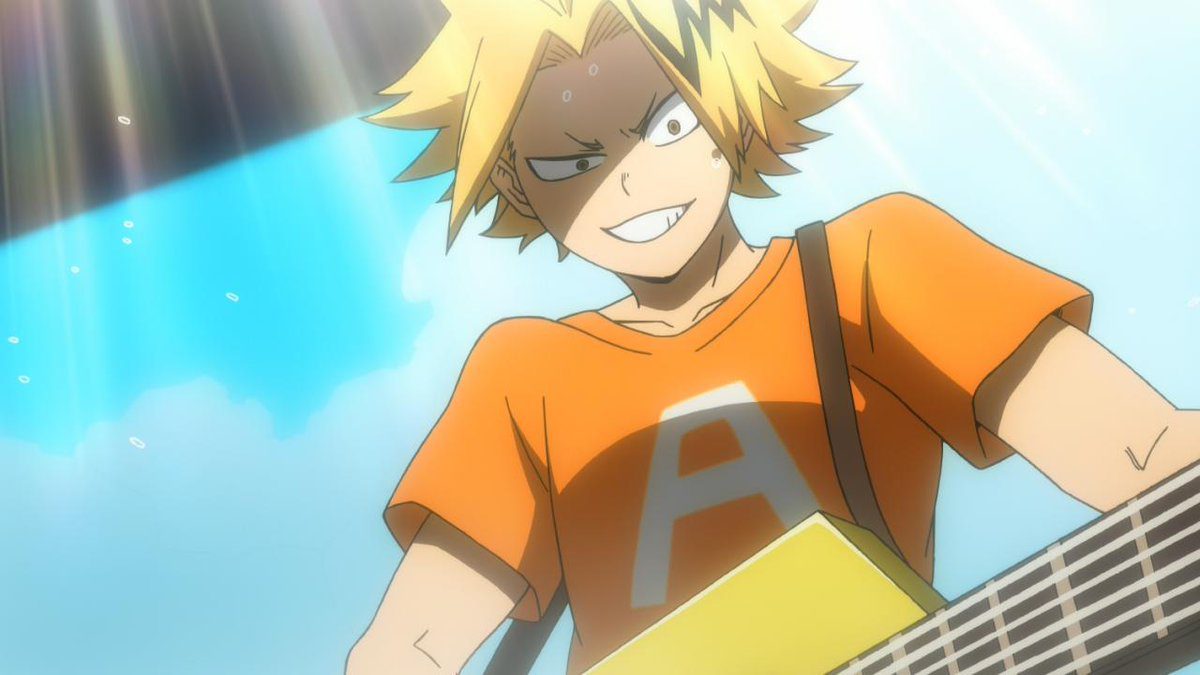 He defends them and knows the potential they have like he did for Bakugou and Kirishima while fighting Seiji Shishikura. If only he was a little bit more serious, he would be able to come up with even better strategies for his team.

Along with being a great supporter and motivator, Denki is a very loyal friend. Even if it isn’t his problem, he will jump in a fight if a friend is getting beaten up. He possesses an immense ability to be a team player. As mentioned above, Denki knows that he cannot fight battles alone and probably needs help from his teammates as he acknowledges their abilities. Denki was one of the first to socialize in class. He treats everyone as equals and considers his classmates his friends. If you’re friends with Denki, he probably will join you in your random endeavors. From tagging along with Mineta to fighting alongside Kirishima and Bakugou, he adapts very well with his friends. 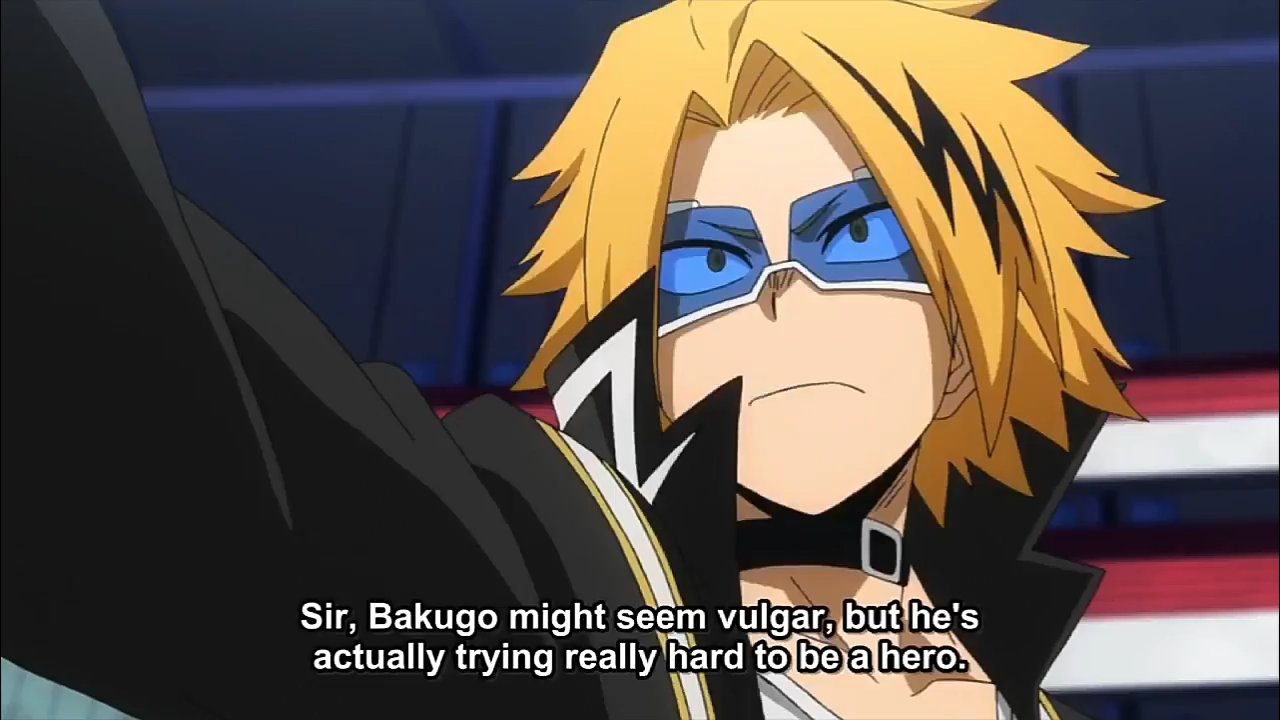 11. Lastly, Denki was considered to be the U.A. traitor by some fans

I know this will contradict the previous point, but the theory is interesting. Although the manga has revealed who the UA traitor is, think about it. So far, we have seen how Denki is very smart yet dumb. He has shown great fighting skills and random competitiveness, but suddenly his personality takes a turn to be just another random classmate.

Besides that, Denki’s quirk helps him with telecommunication. He can manipulate electricity. There seemed to be a problem with communication most of the time whenever the class was attacked by the League of Villains. The fact that electricity is a powerful quirk that is capable of both long-range and short-range attacks speaks enough of how powerful he can get. It almost feels as if he is holding his powers back. There was also this one time where he is seen praising Stain calling him “Cool”.

But what made me think that he could be the traitor is the fact that he shares the same personality as Hawks, a pro-hero who works as a double-agent. It would be pretty easy for Denki to persuade others into thinking that he was with them all along.

Another thing is that just how Denki cannot use his quirk to the fullest without being vulnerable in the end, the actual traitor, too, has a very similar problem. It still is a possibility that there could be two traitors. I mean, remember his original design was supposed to be very villainous.

Also Read: Who is the Traitor in My Hero Academia?