Gorya helps Ren to chase after his love. Meanwhile, Thyme has accepted his love for Gorya and begun wooing her. How will once enemies turn into lovers? 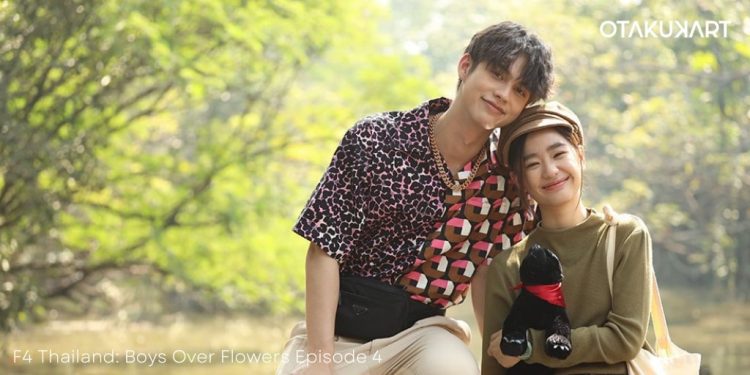 F4 Thailand: Boys Over Flowers Episode 4 is coming soon with new trouble for Thyme and Gorya! With Ren’s leaving for France to chase after his love, Thyme has stepped up his game. The interesting fact, his sister, Tia, also helps him out to woo our pretty girl Gorya. It will be super exciting to watch his little love chase! However, their newly found love will have to face the upcoming troubles.

The latest episode shows Ren and Gorya’s first fight just like it had happened in all other versions of Boys Over Flowers. Knowing how much Mira matters to Ren, Gorya tries to stop her from leaving Thailand, even though it could have been an opportunity to win his heart. However, Gorya chooses Ren’s happiness over her love. With Ren’s chapter closing, Gorya begins to discover the innocent, pure side of Thyme. Although they have a long way before becoming a real couple, Thyme has taken the first step. ‘His shy but straightforward date invitation in front of the whole school’ has already stolen viewers’ hearts! Therefore, it will be exhilarating to watch how their sweet love heads in F4 Thailand: Boys Over Flowers Episode 4!

Recap Of Ep 3- Thyme Asks Gorya On Their First Date

Ep 3 of Meteor Garden Thailand shows the whipped Thyme determining to woo Gorya. Thus, he even rents the whole bus just to be with her in her ordinary life. However, instead, Gorya pisses off, which leads to another childish war. Thankfully at the right moment, Thyme’s sister, Tia, stops him where we witness the iconic sister kick! Whereas brother-sister gets to have a heart-to-heart talk, Ren fights with Mira. He finds that she is leaving for France to continue her dream of becoming a human rights lawyer.

After witnessing Ren lose his smile and give up on his love, Gorya tries to stop Mira from leaving. She even begs her for Ren’s happiness which, of course, Ren sees. The enraged Ren snaps at Gorya, but Gorya makes him realize that he has done nothing for his love than easily give up. Finally finding courage, he decides to chase Mira and leaves for France. By the ending, our adorable lead Thyme asks Gorya on a date through live broadcasting in front of the whole school. Initially, Gorya doesn’t go. But, seeing it pouring, she visits the meeting place only to find Thyme drenching in the rain while waiting for his girl. Hence, F4 Thailand: Boys Over Flowers Episode 4 will show their first messy date!

What To Expect In Episode 4 Of F4 Thailand: Boys Over Flowers?

The preview of F4 Thailand: Boys Over Flowers Episode 4 reveals Thyme and Gorya’s first chaotic date! It will be interesting to witness their childish sweet war as both have different tastes. However, another problem will grow with the other students finding it. Thyme will bravely take Gorya to be with the F4 squad, which will indeed create more trouble for Gorya. Furthermore, Gorya’s family will face the wrath of loan sharks for not paying their debt. Therefore to earn money, Gorya may resort to the way she should not!

Thyme jealous of a mascot in Ep4 preview, getting cuter with each episode 😂
The director said Bright was very good at playing a guy crazily in love, can't wait to see the next episodes 🥰#F4Thailand #F4Thyme #bbrightvc @bbrightvcpic.twitter.com/oFOqzNaaqU

Meanwhile, Kevin and MJ will find out about Gorya’s side part-time work, which will create misunderstanding in Thyme and Gorya’s relationship. Gorya’s friend, Kaning, will try to make them understand the gravity of Gorya’s family’s financial situation. However, Ren and MJ seem to have different ideas. Will the F4 squad save their friend’s love? Or will it create another rift in their love story? Thus, find out how Thyme and Gorya’s love story change from the first date to the first love quarrel in F4 Thailand: Boys Over Flowers Episode 4!

F4 Thailand: Boys Over Flowers Episode 4 will be released on 15 January 2022 at 8.30 pm ICT on the GMM25 network. Although Thyme has accepted his feelings for Gorya, Gorya seems confused about her feeling. How will the pair overcome their first love obstacle when they lack trust in each other? Will it strengthen their relationship and make them fall in deeper for each other? Or will it create another unbreakable wall in their love story? Thus, to find out the next chapter of their love tale, watch every new episode of F4 Thailand: Boys Over Flowers on Saturday. All episodes air for 60 minutes.

F4 Thailand Boys Over Flowers will be available on the GMM25 channel at 8:30 pm ICT. Simultaneously, it will be airing on GMM25’s official YouTube channel. In other nations, the episode will be out on the same day at 8:30 am in the USA, 1:30 pm in the UK, 7 pm in India, 9:30 pm in the Philippines. On 16 January 2022, the episode will release at 12:30 am in Australia. The series Meteor Garden Thailand is also available on ViuTV with English Subtitles. However, Viu streaming is accessible in a few selected nations only.