There's a link between Eri's horn and her peculiarity. Her Quirk may be in her blood, but it accumulates in that horn. 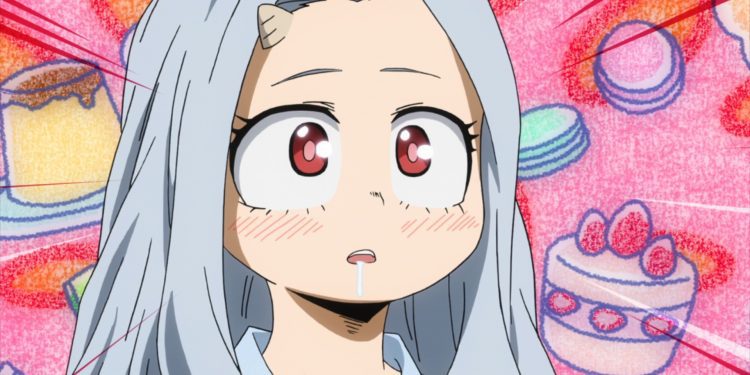 Eri is undoubtedly one of the most tragic characters in the My Hero Academia series (so far). Her suffering drew us all in – especially the series’ protagonists. It was simple to perceive her as a girl who needed help and nothing more. That, however, would be a mistake. Eri is a complicated and wounded girl, so there’s a lot to learn about her. So, let’s get down today and go through all you need to know about Eri’s Quirk.

Eri is the boss’s granddaughter, Shie Hassaikai. She was also a vital part of Kai Chisaki’s attempt to create a Quirk-Destroying Drug. She has been residing at the UA dorms since Deku and Mirio rescued her. Eri is quiet and timid for the most part, owing to her horrific past at the hands of her so-called “father,” but she fully demonstrates the depth of her skill in Midoriya’s last struggle against Overhaul.

What is Eri’s Quirk?

Eri’s Quirk enables her to revert a live person’s body to an initial condition, allowing her to make her victim physically younger, cure injuries, and remove physiological changes. She had even shown the capacity to rewind a person’s body to a time before it existed.

Her Quirk’s power is from the horn on her head, and the size of the horn determines the degree of her power. It is also an accumulation-type Quirk, which means that the energy it emits must store over time.

Eri’s blood can assault an individual’s Quirk and block its activation by reversing the target’s development before the point of the Quirk phenomena as a consequence of her Quirk modifying her body.

Eraser Head said that her Quirk could even rewind and repair the bodies of individuals who have lost their Quirks. However, Eraser Head noted that the Quirk only works on people, not items.

Read More: Who is the Traitor in MHA?

Eri is still unfamiliar with many common ideas and day-to-day activities due to her past upbringing and solitude. This includes holidays, as she blended Halloween, Setsubun, and Easter into her Christmas celebrations. Eri became a timid and isolated child when her mother rejected her after she accidentally made her father vanish with her Quirk and the experiments she was given to by Kai Chisaki. She had no one express compassion to her in her life.
Also Read: My Hero Academia Characters Birthday and their Zodiac signs

You may have observed that Eri’s Quirk can be activated in two ways, one of which she has yet to learn how to regulate (as evidenced by the time she was helping Deku). Then there’s the other one. Where it can be contained and used as a weapon. Eri’s peculiarity practically flows through her veins. It may be deleted and transformed to a specific condition, especially using the technology established by Overhaul.

Based on the degree of failure we’ve witnessed, it’s evident that it’s not a simple procedure. But the fact that it is even feasible is a little frightening. Rewind does not act on non-living beings, but everything with a heartbeat is vulnerable to its powerful effects. It can reverse any occurrence, even de-age humans, much like Orihime Inoue’s Phenomena Rejection method in Bleach.

What is the Significance of her Name?

Eri’s name consists of two words: “break” and “reason, reasoning.” The combination of the two letters is “destruction,” referring to the Quirk-Destroying Drugs. It can destroy living things by rewinding them out of existence. Her name also relates to how her Quirk “breaks logic” by definition, referred to as a mutation since it is unlike any Quirk on either side of her family, and very few people understand how it works.

The anime may not have shown you enough of this for you to notice, but the manga should have. There’s a link between Eri’s horn and her peculiarity. Her Quirk may be in her blood, but it accumulates in that horn.

When the horn is essentially gone (as it is after the events with Overhaul), her Quirk isn’t powerful enough to accomplish anything. But what happens when her horn is ultimately pronounced? She is at her most powerful — and deadly – at this time.

The intriguing aspect of Rewind is its connection to the spiral horn protruding from the top right side of her head. The size of this physical component seems to be related to the total amount of her Quirk; for example, the larger it is, the more she can use Rewind.

Furthermore, the horn’s aggregative nature suggests that it has only as much impact as the quantity of “energy” contained inside it.

Also Read: Who is the Traitor in My Hero Academia?