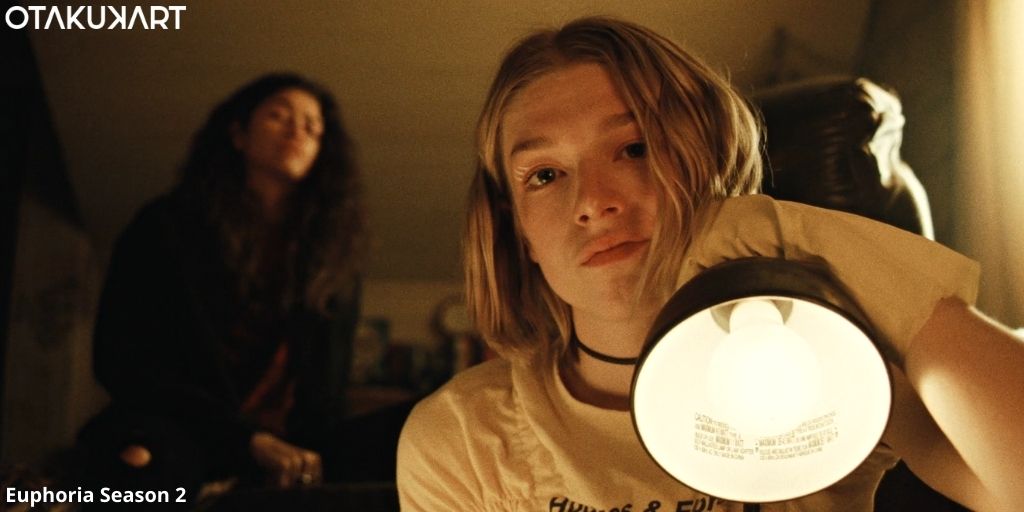 Things might get a little out of hand for Rue on Euphoria Season 2 Episode 4 as she moves ahead with a risky business. Meanwhile, the previous episode gave us a look at how she kept her relapse a secret from her sister Gia and her mom. Moreover, she continued to keep her constant drug use a secret from Jules as well. Whereas, Jules was not sure about Rue’s new friend Elliot and thought that he was trying to get intimate with her.

On the other hand, we saw Cassie all obsessed with Nate and trying to get his attention at school which led her to start making a lot of efforts while dressing up for school. Meanwhile, Maddy was still confused about whether she felt better now or when she was in a relationship with Nate. Moving on, Cal was still living in fear of someone else finding out what he did with Jules through the disk that had their recording. However, he came across a surprise when he tried to keep a constant watch on Fesco.

The fabulous American teen drama has managed to keep a whole lot of viewers hooked to the show since it kicked off in the year 2019. Furthermore, the current season of the show is once again doing wonders with its intriguing storyline. However, now the fans are eager to watch Euphoria Season 2 Episode 4. But first, let us take a quick look at all that went down in the previous episode.

Episode 3 of Euphoria Season 2 is titled “Ruminations: Big And Little Bullys,” dropped on 23rd January 2022. The episode began with a flashback from young Cal’s life when he was in school and what he was like. We saw that he spent most of his time with his best friend Derek, but Cal soon got a girlfriend. Although Cal and Derek eventually got closer at night out in a bar, he received shocking news the next morning, which was his girlfriend getting pregnant. Coming back to the present, we saw Rue and Jules at Elliot’s house as Jules questioned Elliot about his intentions towards Rue and whether he liked her. Although, he convinced them that he just wanted to be their friend and nothing more.

Meanwhile, Lexi wrote a play that was sort of based on her life as we saw how she saw herself as an observer and the writer-director of her own movie, which was basically her life. Furthermore, she got permission to put up her play and distributed flyers in the school for auditions. On the other hand, Cassie was living her dream by spending time with Nate secretly outside of school.

But she was also desperate for getting his attention at school, too, which is why she even started waking up at 4 in the morning to get ready for school and even dressed up as Maddy a few times. Although, Nate eventually took a pass on her and went to Maddy’s house with flowers, probably with an intention to get with her. Kat met her boyfriend Ethan’s parents the first time but got a lot nervous and made it all awkward. Meanwhile, Cal was unable to sleep for days as he couldn’t get the thought of the disk out of his mind.

Furthermore, he wasn’t giving up easily, so he started keeping a watch on Fezco outside his house, but Ashtray put a gun to his head and brought him. As Ashtray started beating him on his head, Cal told Fezco about the disk and Jules, but Fezco had no idea about any of that, which confused Cal as he now realized that Fezco didn’t have the disk.

On the other hand, Rue went to Laurie with her business plan of selling drugs that impressed Laurie. Eventually, she gave Rue a suitcase filled with $10k worth of drugs to sell. But she warned her to get the money in time, or she will use her ways to take back the money. Furthermore, Rue got into an argument with Ali when he tried to ask her what was in the suitcase. In the end, we saw Rue trying one of the drugs from the suitcase. While Jules and Elliot spent time together after Rue didn’t show up to hang out with them.

“Euphoria Season 2 Episode 4 will release on 30th January 2022 on HBO Max at 9 pm ET.” Furthermore, the episode will be titled “You Who Cannot See, Think Of Those Who Can”. The episode will see Rue trying to keep her business a secret from Jules. While Jules and Elliot spent more and more time together in the absence of Rue, things will get more complicated with Nate, Maddy, and Cassie.