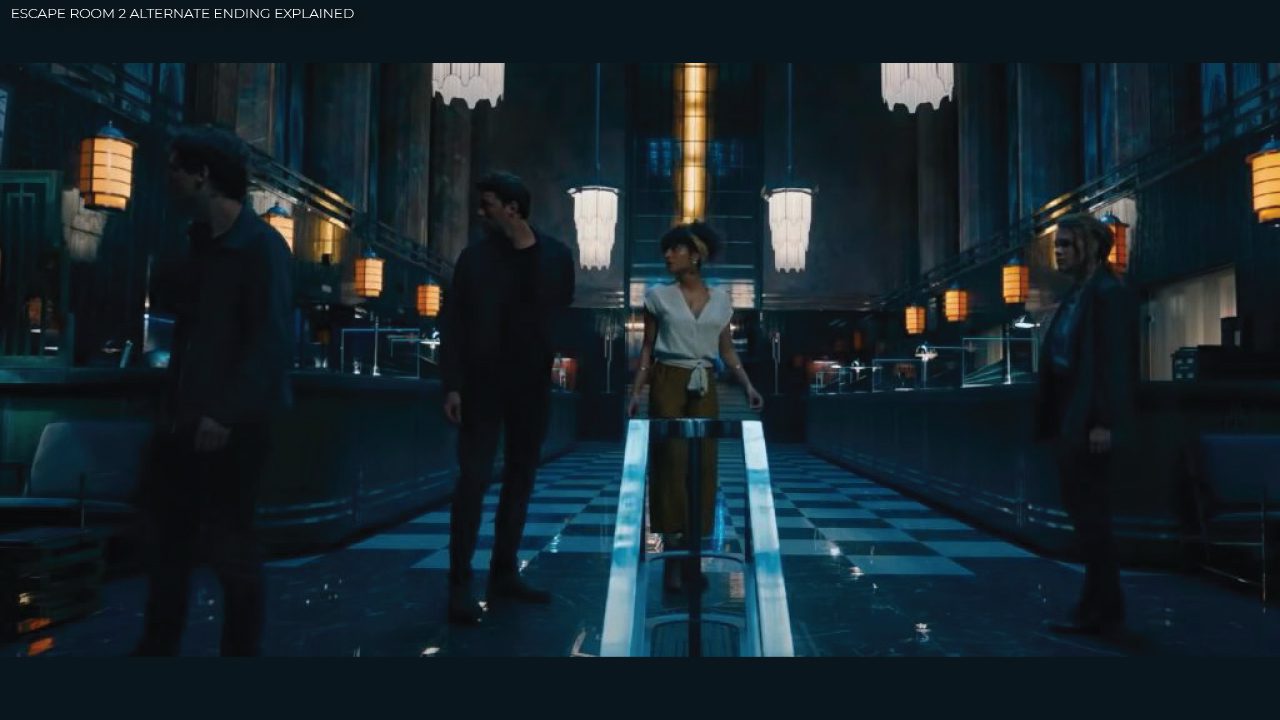 If you want to know about the Escape Room 2 Alternate Ending Explained, you came to the right place. Here is all you need to know. Firstly, if you watched the first film you know that Zoey and Ben (our heroes) are going against the Minos Escape Rooms Corporation. The ones behind the escape rooms in the first movie. Secondly, this movie’s plot catches up with that narrative as Zoey and Ben get caught in an escape room. And that is how the story unfolds for the movie.

This movie stars Logan Miller and Taylor Russell in their previous roles from Escape Room. Director Adam Robitel reprised his role and insisted on a theatrical release for the film instead of a streaming distribution because he felt that the movie would be more thrilling and scarier that way. And who could blame him? Even Christopher Nolan, —who did Tenet— adores his cinema theaters in IMax. And frankly, so do we, but with a COVID pandemic on our hands, that’s another story and health is our priority. Now, let’s jump into the subject here at Otakukart.

Escape Room 2 Alternate Ending Explained – All You Need To Know

The final moments of Escape Room: Tournament of Champions’ ending set up a continuation of the story in Escape Room 3. Amanda Harper, who died in the first Escape Room movie. Revealed to have had a daughter kidnapped by the Minos Corporation and used as leverage to force her to design a new escape room. Amanda’s death by falling was an illusion. And she has been under Minos’ grip ever since. Escape Room: Tournament of Champions opens up the possibility that other contestants could still be alive. Amanda’s escape rooms were unique in how she used memories from a particular day to tell her own story.

When caught in the acid rain, Rachel and Brianna appeared to die, but Zoey was dropped into the next room before their deaths were confirmed. Danny seemed to drown after falling through the nice, but since his body disappeared into the water, he could very well return in the same way. Escape Room 2 ended with what seemed to be an escape room built inside a plane before it was revealed that the contestants were actually employees of the puzzle company Minos. Amanda realized she’d been tricked into thinking she was doing things of her own free will. When really she was playing into their hands. The book about free will that her therapist showed her at the movie’s start was a clue to how Minos planned to trick her.

Escape Room: Tournament of Champions expands the idea of what an escape room can be. It’s possible that the plane that Ben and Zoey get on isn’t even a real plane, but a model inside a warehouse-like the one seen at the end of Escape Room. If Zoey can’t figure out the clues, she and Ben and all the other passengers will actually crash. Escape Room: 2 is the third film in the series and marks the latest installment in the Minos Corporation puzzle series. Director Adam Robitel says the idea that there is this Machiavellian force controlling every single choice we make is a terrifying one – mainly coming out of a pandemic where we feel like we’ve lost all agency over our lives. The game can be anywhere; the puzzles are anywhere.

And the notion that there is this Machiavellian force directing every decision we make, I think it’s a very frightening one – mainly coming out of a pandemic when we feel like we’ve lost all agency over our lives. “Escape Room 2” upped the stakes straight away by converting a training vehicle into an escape room. This gives a sense of just how terrifyingly powerful the Minos Corporation is. If they can manage New York’s subway system and turn the police station into an extension of their game. How much else might they control?

Did Zoey bypass the puzzle system and kill the Gamesmaster in the first Escape Room movie due to her own choice? Or was that also arranged as part of the entertainment by Minos? And, if Escape Room 2 transformed a New York City sidewalk, a beach. And even an aircraft into complex and meticulously regulated puzzles, how will Minos continue to raise the bar in Escape Room 3?