Till now, only Woo Yeon is the only one who finds Yoon Joo fishy. 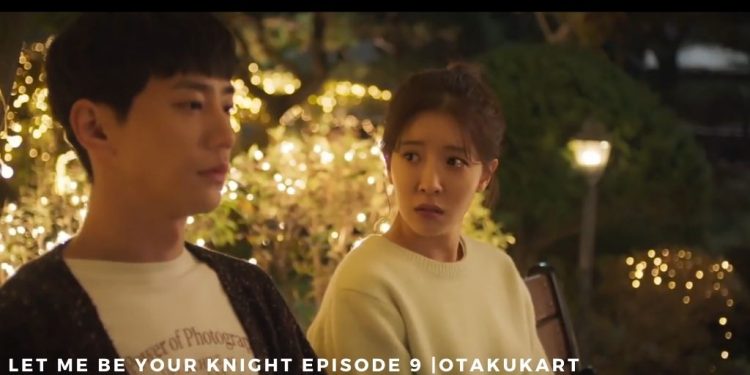 Episode 9 of Let Me Be Your Knight is just around the corner! The kdrama has been winning hearts with its splendid storytelling and talented cast. Undoubtedly, all of the episodes, including the latest one was full of fun and heart-fluttering scenes. You could make a whole half-hour compilation video of Yoon Joo and Tae In getting jealous from the 8th episode itself. While Yoon Joo was getting angry whenever Tae In’s close friend and Tae In were having fun, Tae In couldn’t help but scowl whenever he saw Woo Yeon and Yoon Joo having fun. Could these two get any cuter! Also, although Yoon Joo thought that Tae In’s friend liked Tae In, Tae In’s friend actually knew that Tae In and Yoon Joo liked each other and had no intention of dating Tae In again.

Also, after waiting for a long time, Tae In finally confessed his feelings for Yoon Joo in a very romantic way. He first called her over to listen to a song. In the song’s lyrics itself, Tae In had made it clear that he likes Yoon Joo. And to make things better, the audience, as well as U-Kiss’s fans, were able to enjoy Lee Jun Young’s sultry and sweet vocals. Another fun fact is that almost all of the members of the imaginary band LUNA are real kpop idols in real life. JR is from NU’EST, Kim Dong Hyun is from AB61X, and Yoon Ji Sung is an accomplished soloist and was also a member of WANNA One. Don’t miss out on these idol-actors amazing acting skills, and check out the release date, streaming details, and prediction for Episode 9 of Let Me Be Your Knight.

What To Expect From Let Be Your Knight Episode 9?

Let Me Be Your Knight Episode 9 would surely make the audience’s heart skip a beat. The episode will be taking the main couple’s relationship to the next level. Now that Yoon Joo and Tae In have had their first kiss, they naturally have become a couple. However, in the preview for the 9th episode, Yoon Joo has been trying to block off all the attempts that Tae In makes. She worried that he would feel heavily betrayed when he found out that she wasn’t Dr.Kang but Dr.Kang’s poorer twin Yoon Joo. He will be much more upset when he finds out that Yoon Joo had decided to act as Dr.Kang because she was in desperate need of money.

So you could see why Yoon Joo thinks that she doesn’t deserve to date Tae In right now. Meanwhile, the preview has shown that  Woo Yeon had come to the bottom of things. Ever since he had seen the real Dr.Kang, he had been quite suspicious of Dr.Kang, who had been living with them. He, too, will be depressed when he finds out Yoon Joo’s secret because he, too, had started liking her. Knowing Woo Yeon’s personality, he would either try to hide the fact or straight up tell Yoon Joo that she was wrong without getting her in trouble.

Let Me Be Your Knight Episode 9 Release Date

Watch Let Me Be Your Knight Ep 9 Online – Streaming Details

Also Read: Top 8 Spectacular IU Kdramas That Prove She Is A Talented Queen