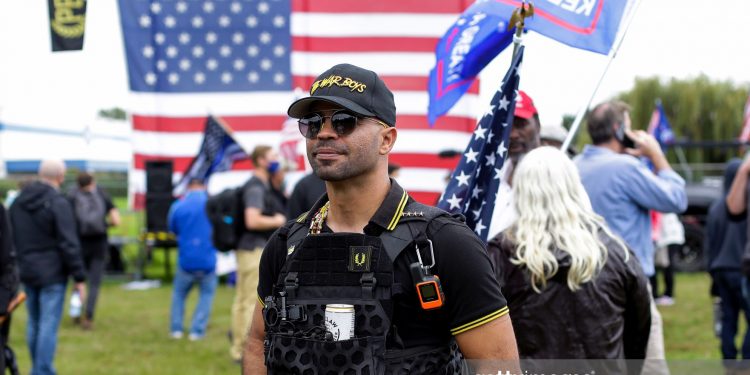 For burning BLM banners and carrying pistol magazines to Washington, DC, Enrique Tarrio, an American nationality activist, was sentenced to more than five months in prison. Enrique Tarrio, also known as Henry Tarrio, is the leader of Proud Boys, a far-right and neo-fascist male organization in the United States that promotes and engages in political violence. According to recent press reports, the activist was sentenced to 5 months in prison for previous criminal offenses. Tarrio was accused of torching a Black Lives Matter sign and traveling to Washington, DC, with a high-capacity rifle magazine. Do you know how much is Enrique Tarrio’s Net Worth?

Between the end of 2020 and the beginning of 2021, the incident occurred. On December 12, he set fire to a BLM sign during a pro-Trump rally in Washington, and on January 4, he was arrested for carrying two magazines. After his detention, Enrique was released on the condition that he does not return to the District of Columbia. According to CNN, Tarrio was sentenced to approximately five months in prison as a result of the charges.

What is Enrique Tarrio’s Net Worth?

Enrique Tarrio’s net worth ranges from $800,000 to $1 million. He makes money from his prominent career. Twitter deactivated Tarrio’s account, as well as others related to the Proud Boys, in 2018, citing platform policy forbidding accounts associated with violent extremist groups. Tarrio’s second account, which he created to evade suspension, was discovered the following year and removed from Twitter. Tarrio claims to be friends with Roger Stone, a Trump supporter and prominent member of the Proud Boys.

Tarrio arrived outside the courtroom wearing a shirt that read “Roger Stone did nothing wrong” after Stone’s arrest in January 2019. In December 2020, Tarrio appeared on stage with Stone at a “Stop the Steal” event. Tarrio competed for Congress in Florida’s 27th district in 2020 but pulled out before the Republican Party primary. According to Tarrio’s responses to a Ballotpedia survey performed in 2019, his campaign’s goals included criminal justice reform, Second Amendment protection, combating domestic terrorism, ending the war on drugs, free speech on digital platforms, and immigration reform.

The head of the Proud Boys extremist group, Tarrio, was sentenced to more than five months in prison for torching a Black Lives Matter banner from a historic Black church in downtown Washington and carrying two high-capacity firearm magazines into the nation’s capital days before the January 6 riot. Enrique Tarrio profusely apologized to the court for his actions, which he called a “terrible mistake.” During the video conference, Tarrio admitted, “What He did was wrong.”

Tarrio was detained two days before tens of thousands of Trump supporters, including members of the Proud Boys, stormed on the US Capitol and disrupted the Electoral College vote certification. Tarrio was mandated to stay away from Washington, and authorities later claimed that he was apprehended in part to avert violence.

Authorities say Proud Boys members stole the #BLACKLIVESMATTER banner from the Asbury United Methodist Church on Dec. 12 and set it ablaze using lighter fluid and lighters. Tarrio confessed days later in an interview with The Washington Post that he took part in the banner burning by sharing a photo of himself on his Parler account with an unlit lighter. Rev. Dr. Ianther Mills, the church’s senior pastor, told the judge that it was an “act of intimidation and prejudice” that caused the community “immense and potentially permanent pain.”

What Is Proud Boys?

The Proud Boys is a male-only, far-right, neo-fascist corporation that encourages and engages in political violence in the United States. In may additionally, 2017, Tarrio participated at a Miami event for far-right broadcaster Milo Yiannopoulos when he met a member of the Proud Boys who encouraged him to join.

Tarrio attended the Unite the Proper rally in Charlottesville, Virginia, in August 2017. He claimed he came to protest the demolition of accomplice memorials and monuments. Tarrio became a fourth-diploma member of the Proud Boys in 2018, a distinction reserved for those who go into a physical conflict “for the cause”; he punched a person suspected of being affiliated with Antifa.

After Tarrio approached House Speaker Nancy Pelosi in Coral Gables in late 2018, the chairman of the Miami-Dade Republican celebration apologized, and U.S. Senator Marco Rubio compared the disruptions to the “repudiation mobs Castro has long used in Cuba.” Tarrio’s account, along with others linked to the Proud Boys, was suspended by Twitter in 2018, citing a platform regulation prohibiting money owing to violent extremist enterprises. The next year, Twitter discovered and removed any other account made with Tarrio to circumvent the suspension.