Enhypen’s Ni-ki had recently sat down with Weverse magazine to talk about the pressure he felt during Enhyepn’s Japanese debut, collaboration with his senior TXT’s Yeonjun, and more. If you haven’t heard about Enhpen’s super-duper talented maknae, we are asking this kindly, are you sure you haven’t been living in the ice age? At the mere age of 16, the Japanese-originating K-pop male idol Nishimura Ni-ki has taken over the whole industry with his powerful vocals and amazing dance moves. Enhpen’s main dancer had trained for only eight months before taking part in the survival show I-Land, which subsequently led to the making of the leading figures of the 5th-generation of K-pop, Enhypen.

Naturally, with his youthfulness and unending talents, Ni-ki has been bagging the hearts of millions of people effortlessly. Although he is still relatively new to the K-pop industry, Ni-ki has been praised for his dancing skills by big names like BTS’s J-hope, Seventeen’s The8, Doobu, and Big Hit Entertainment’s Son Songdeuk. Well, if you know that Ni-ki has been practicing the art of dance since a young age, his skills would certainly be more than incredible. Ever since his childhood Ni-ki had been practicing jazz and ballet. If Ni-ki would be at school now, he would be that handsome and popular guy who plays soccer. This male K-pop idol loves dancing so much that his motto is ‘Dance is Life’. See what this great dancer has to say about dancing with yet another great dancer TXT’s Yeonjun, the struggles he faced while his group’s Japanese debut, and more.

Believe it or not, the maknae has stopped hugging people whenever he goes to sleep. The male kpop idol said that he had noticed how it could make the members have a hard time with it, so he decided to break off from this habit of his. And it turns out the change in sleeping habits was for the better because Ni-ki finds it more comfortable sleeping alone now! When asked about his mischiefs personality, Ni-ki laughed and said this may be because he is the most energetic member of the band. He said that the other members like his playful personality too. Ni-ki revealed on the weverse magazine interview that he always made sure to have a game of ball before dance practice. This is because he felt like he was stretching himself before the main game, and it helped him to do his best.

Ni-ki finally got to put his love for sports into use when ENHYPEN gave their fans a rugby-themed performance at the grand 2021 Mnet Asian Music Awards. Furthermore, Ni-ki also confessed that the part where he and Sunwoo play with the ball is actually pre-recorded because it was too easy to mess up on live tv. Ni-ki further went on to say that after they gain more practice, he wants to perform the same moves on live tv.

Just like the other members, Ni-ki too said that ‘Blessed-Cursed’ is different from anything ENHYPEN has ever done before. Furthermore, being the main dancer that he is, Ni-ki said that he liked the song as its choreography helped in showing off ENHYPEN’s teamwork as a group. Moreover, Ni-ki also mentioned that the choreography is a perfect blend of old and new styles.

Although mastering them took a lot of energy and effort, it was all worth it, according to Ni-ki. Ni-ki further went on to mention how grateful he felt towards the TXT members for looking after him. Additionally, he also talked about how he did not realize that every little detail needs attention on stage until he saw the TXT members and their way of working. Ni-ki also talked about how the past year has helped him in building up confidence.

Looking back at his first performance with ENHYPEN, Ni-ki recalls how nervous and jittery they all were. But after receiving love from fans and praises from critics, Ni-ki says that he will every performance to do better on the next stage. 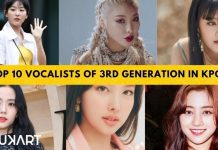