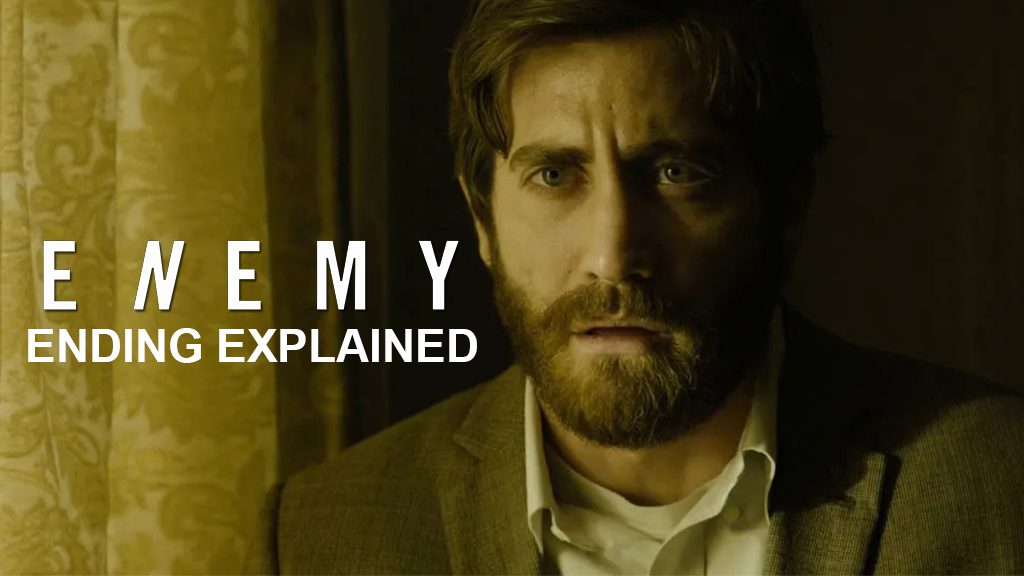 We will take a dip into the ocean of thriller mysteries to get the Enemy’s ending, and plot explained. Thriller movies always had a vast fanbase, and people love to enjoy a good and unpredictable story to enjoy. Denis Villeneuve directs the 2013 thriller-mystery movie, Enemy and is also his second thriller film project after Prisoners. Jake Gyllenhaal is playing the lead role, and his performance was phenomenal in this horror story. The movie has gained quite a lot of attention since it came out on Amazon Prime Video. If you haven’t watched the movie, you should first watch it because this article will contain many spoilers, which can ruin the experience of enjoying this thriller masterpiece.

The story revolves around a college history professor who meets his doppelganger. Since then, his life changes as he exchanges his life with the doppelganger, which leads to a complex plot. The movie is filled with metaphors. Villeneuve is famous for making mind-numbing plots with various metaphors. This movie can also make you lost track of what is going on because of its complex storyline. But don’t worry anymore because we will go through the plot and will share our perspective about the Enemy’s ending and plot.

What is the Plot of Enemy?

Adam Bell is a history professor, who lives a repetitive life, where he lives in an empty flat, teaches at a college, and then has some intimate moments with his girlfriend. One day, a fellow teacher suggests to Adam a movie he should watch. Therefore, he rents the movie from a rental store, and while watching the movie, he spots an actor who looks exactly like him. Since then, Adam gets a little obsessed with the actor and finds out about his agency. After reaching the acting agency, Adam receives a package from the security, who thinks he’s the actor. From the package, Adam gets the actor’s address and his real name, which is Anthony Claire. 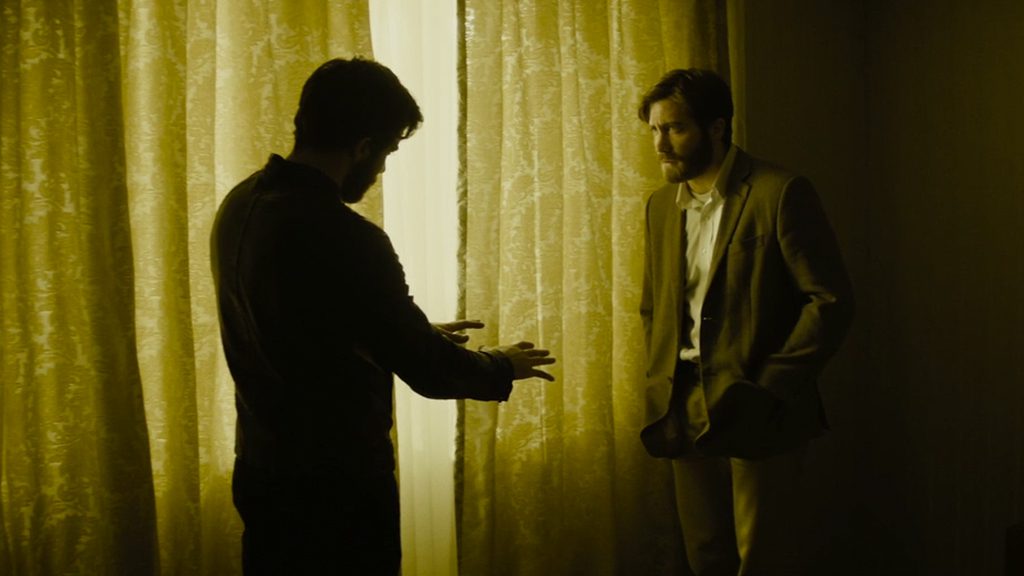 Adam calls at his doppelganger’s home, but Anthony’s wife, Helen, picks the call, and she thinks it’s her husband pranking her over the call. But Anthony refuses to do any prank and thinks it might be his fan. One day Adam could finally talk with Anthony over the call, but he asks Adam to never call again. Helen suspects Adam was talking to some women, suggesting Anthony has been unfaithful in the past. Further, it clarifies the person we saw visiting the sex club was not Adam but Anthony.

Anthony talking to Adam that day didn’t convince Helen, and thus, she reached the university to meet Adam. But she was in absolute shock because of Adam’s resemblance to Anthony. At home, Helen talks about the history teacher’s resemblance to her husband. Therefore, Anthony finally agrees to meet with Adam in a hotel room. After the meeting, they both discover sharing the same scar on their chests other than the face. Adam didn’t like Anthony’s direct personality and left the hotel. However, Anthony stalks Adam after the meet and soon gets attracted towards Adam’s girlfriend, Marry.

One day, Anthony reaches for Adam and manipulates him to Mary go on a date with Adam. The next day, both men exchanges each other clothes, and Anthony goes to meet Mary while impersonating Adam. Whereas Adam impersonates Anthony and goes to his apartment, and ends up in a romantic moment with Helen. Meanwhile, Mary notices the ring-mark on Anthony’s hand and asks him about it. To which Anthony says he always had that mark. But Mary doesn’t believe it and asks him to drop her. 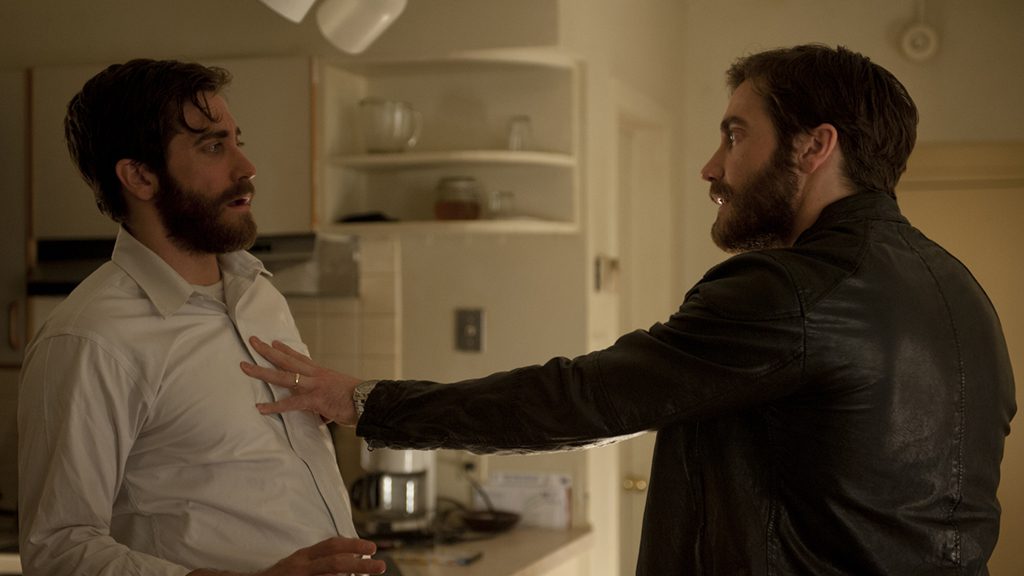 Anthony manipulating Adam to go out with Mary.

We see after having a lovely intimate moment with Helen, Adam cries and apologizes, and thus Mary tells him to stay, and they again make love. However, Mary and Anthony end up in a fight and which leads to a fatal accident, which might have killed them both. The next day, Adam gets ready and takes the sex club key, and decides to go there. But when he goes to tell Helen, he sees a giant spider cowering against the wall, to which Adam sighs with a resigned look.

What does the Enemy ending and plot explain?

The most complex thing about the plot is the two Jake Gyllenhaals and the spider references. Many have thought of them to be two different people. However, we never saw them appear together in front of anyone else unless they were alone together. Thus, we can think that Adam and Anthony are actually not two different people but a single man who has two separate personalities. We get the first hint when Helen visits Adam at university, and she calls his husband. Adam only replies to the call when Anthony goes out of her eyesight.

We also get the hint that Gyllenhaal is, in reality, having two personalities than being two different persons when he talks to his mother. As she tells him not to meet unknown men in the hotel alone, and now, he got a respectable job and gave up the idea of being an actor. As we saw, Adam recently got a job at university, and Anthony has not been in touch with the agency for six months. Also, Adam’s mother saying that he should be careful with women as he already had a hard time with one, and we also know that Anthony cheated on his wife, Helen. To solidify this theory, Adam also had the same photo as Anthony, just as Helen was torn out of Adam’s one.

We can conclude that Anthony was his stage name, which he used to marry Helen, as he wanted to be an actor. However, after failing in that career, he takes on the job of a history teacher under his real identity. We can think the Adam is actually the embodiment of his positive traits and whereas, Anthony is the negative trait. Whereas the spider references we see throughout the movie can be the women and responsibilities. As Anthony feared responsibilities, and his wife was pregnant, and he didn’t want to be dictated by the family responsibilities.

Enemy’s ending scene can be a reference to that Gyllenhaal’s character can never leave his trait of adultery. As just looking at the sex club’s key, he had the thirst to visit that place. And the cowering spider is Helen, who was scared because Adam/Anthony is going back to his old self again. The resigned look on his face signifies he doesn’t care about Helen getting hurt anymore and will return to his old adultery life again. As we saw in the reference that Adam gave to his class that everything happens twice. The first time is a mistake, but the second time is a facade. So Enemy’s Ending makes us realize that the Enemy in the movie is none other than Jack Gyllenhaal himself.