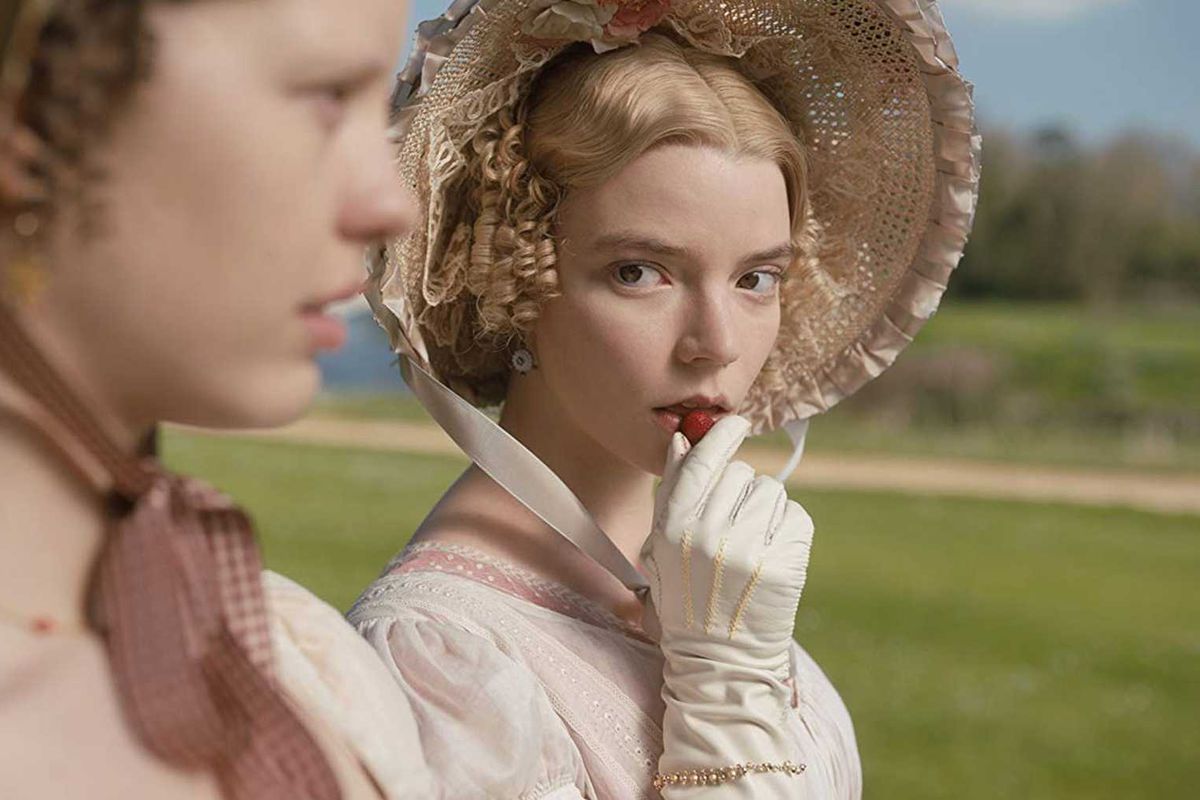 Emma is a romantic, comedy-drama released in 2020 starring Anya Taylor-Joy, Johnny Flynn, Josh O’Connor, Callum Turner, Mia Goth, Miranda Hart, and Bill Nighy. The film is directed by Autumn de Wilde, influenced by a screenplay by Eleanor Catton. It is based on Jane Austen’s novel ‘Emma’ published in 1815.

Emma, is a young woman, who helps her friends in their love life, although she was convinced not to fall in love herself. However, she is just a self-proclaimed cupid between the lovers, and she messes up, unintentionally misguides them with her wrong advices. In between her misdoings and her matchmaking, she finds a way to her own love life. 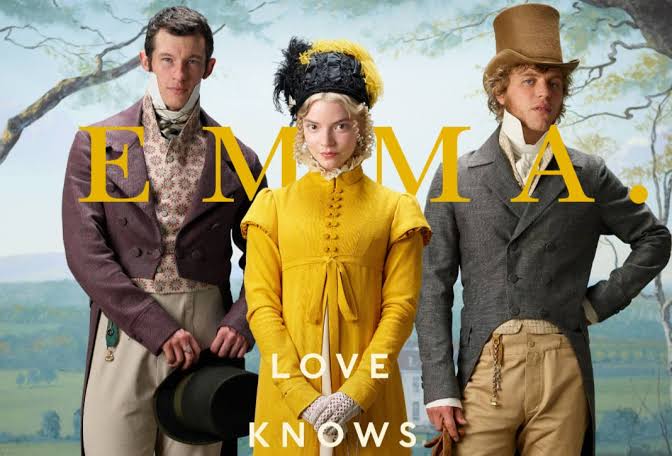 Overview of story and plot analysis-

Emma Woodhouse, played by Anya Taylor- Joy, is the protagonist of the movie. She takes high credibility in her self-claimed matchmaking and sets up her friends with each other. Miss Harriet Smith comes to visit a wedding Emma is also attending and becomes friends with her. She starts making a match between Harriet and Mr. Elton, a village vicar and thinks that they would make a great couple and they deserve each other. Mr. Robert Martin, a tenant farmer of the brother of Emma’s brother-in-law, Mr. Knightley, confesses his love for Harriet, and Harriet also feels the same for him. But, Emma wrongly influences Harriet to refuse him and convinces her to fall in love with Mr. Elton. She is watched by Mr. Knightley who asks her not to interfere in their matter.

At a Christmas dinner party, Emma, her sister’s family, and Mr. Elton went, and they left early as it started snowing. At that time, Mr. Elton reveals that he has feelings for Emma, and she clearly denies it as she had no plans for marriage and falling in love. Emma reveals it to Harriet, and she gets sad. Emma also could sense toxicity in her matchmaking, and finds faults in it. Emma’s brother-in-law suggests Harriet should accept Martin’s love, and they would look great together. Looking at him and Emma quarrel over, and Mr. Elton finding out that Emma wanted to set him up with Harriet he gets angry and leaves.

A new neighbor makes an entry, who is Frank Churchill and Jane Fairfax, the governess niece of Miss Bates. After few weeks, Mr. Elton returns back with a wife. A ball was held on the occasion of Frank’s coming, and Mr. Elton embarrasses Harriet by denying to dance with her, in front of everyone. Mr. Knightley saves her from the embarrassment. Emma also dances with him, and awkward romantic feelings could be felt between them. Shy Emma runs back to her house, and Mr. Knightley follows her. However, at her home she sees Frank rescued Harriet from Romanichal Travellers. Harriet thinks she is in love with Frank, and says, Emma. Emma believes her though she is aware of the consequences and tries to not interfere still she finds a way to make her spend time with Frank. 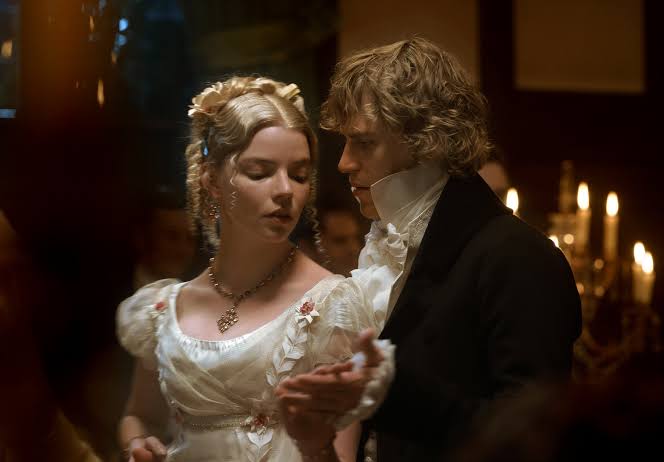 Meanwhile, Mr. Knightley ignores Emma leaving her shocked. When they went on a picnic, Emma unintentionally insults Miss Bates and gets scolded by Mr. Knightley. He asks her to apologize for her rude behavior, and she does it. She also learns that Frank and Jane are secretly engaged. She feels bad for Harriet, but she reveals that it’s Mr. Knightley who she in love with. But, Emma too realizes her feelings for Mr. Knightley.

Mr. Knightley comforts worried Emma and confesses his love for Emma. She agrees to the proposal but was upset at what Harriet would think of her. But, Harriet says that she is being proposed by Mr. Martin, and accepted it. Emma got happy for her and congratulates her.

Emma returns, and at the time, she and Mr. Knightley us madly in love with each other. Though Emma was hesitating because she didn’t want to leave her sick father, but Mr. Knightley assures her and proposes to stay with her family. And both of them get married.

Casting and character analysis of the movie, Emma-

Anya Taylor- Joy plays the role of Emma Woodhouse. The protagonist of the movie is young, beautiful, and mature of her age, because of her mother’s death, and her sister getting married, she is the head of her family and takes care of her sick father. Emma has a bad habit of matchmaking which most of the time ends in misdoings and ends up messed up. Though, she later realizes her mistake. Anna looked beautiful as Emma and was appreciated for her visuals. But, her performance wasn’t top-notch and failed to bring life to the character.

Harriet Smith is played by Mia Goth, who is a seventeen-year-old girl, and the news of her parents is unknown. She is uncertain over her feelings, and her friendship with Emma becomes a major reason why she constantly uses Harriet as her matchmaking object.

Mr. George Knightley is played by Johnny Flynn. He is the brother of Emma’s brother in law. He is the only character who is vocal about Emma’s misdoings and always points out her flaws, out of genuine love and care for her. He is the love interest of Emma in the movie.

Josh O’Connor plays the role of Reverend Mr.Elton. Callum Turner plays Frank Churchill and Amber Anderson as Jane Fairfax. Every actor gave a nice performance, but in a few scenes, the chemistry between the actors seemed dull and not complementing each other in the movie.

Direction and production of the movie-

The film is directed by Autumn de Wilde and produced by Tim Bevan, Eric Fellner, Graham Broadbent, and Pete Czernin along with Perfect World Pictures, Working Title Films, and Blueprint Pictures. The film is based on the book “Emma” by Jane Austen. The cinematography is done by Christopher Blauvelt.

The film, Emma has received a lot of negative reviews from critics. The character Emma shown in the film has little connection with the one in the book. Infact, the character Knightley also differed from the original one. Emma originally in the book is a kind-hearted young woman, who is ready to accept her past mistakes and change herself for the better, but in the movie, she had an arrogant and stubborn side and lacked sweet charm. Knightley was supposedly a sophisticated, frank young man but the version shown in the movie lacked brutality and was portrayed a bit awkward and sheepish. Though, Johnny Flynn looked stunning and stood out. He got a lot of praise for his performance.

The movie lacked proper storytelling and narrative. It seemed longed and slowed down, though, the book Emma is a big story, and showing the whole story in two hours was difficult. The director seemed to have failed to focus on the main parts, instead focused more on unnecessary stories. The music didn’t do any better and seemed unmatched to the scenes. It failed to meet the expectations of the audience, especially the readers of Jane Austen. 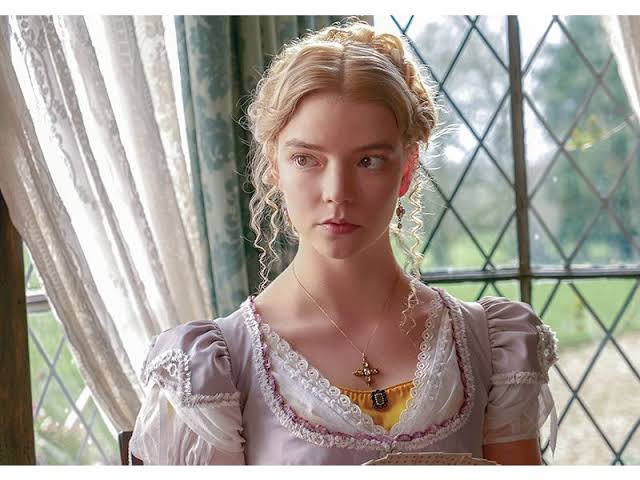 The use of pastels in the cinematography is a big thumbs up for the movie. The costumes wore by the characters were beautiful and added flavor to the movie, Emma. The movie also has a modernized touch in it. A few scenes had brilliant visual effects and it looked mesmerizing.

Overall, the film can be a good one-time watch. My rating for the movie, Emma is 2.5/5.