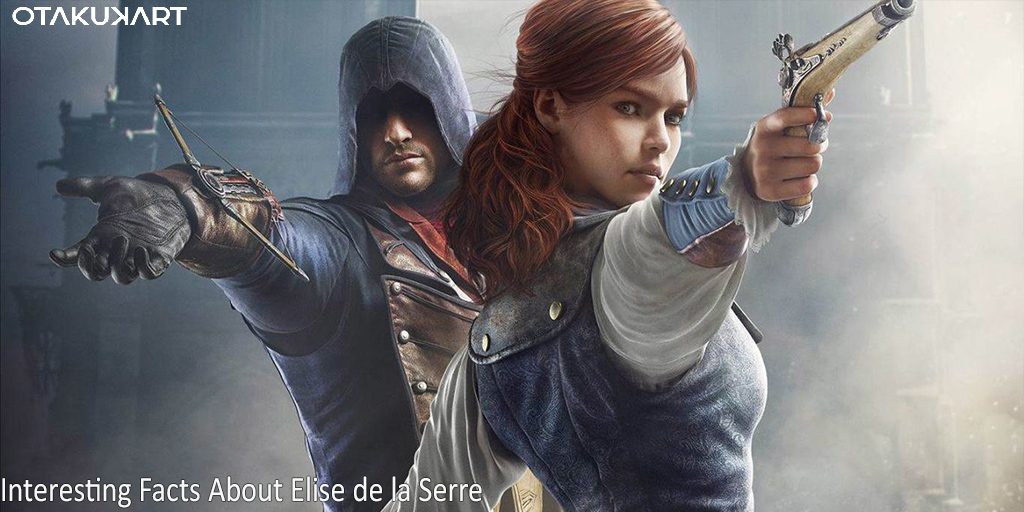 She was inducted in the Templar order like her family and was a great fighter. Elise’s father died in an assassination, which broke her. After these events, she started the search for her father’s murderer with her childhood friend and lover Arno Dorian. She was a great fighter and skilled Templar. She eventually learned of the true murderer of her father’s death, whom she fought, but the opponents wielded a Piece of Eden, which was unstable and exploded. This explosion resulted in her death.

After the death of Arno’s father, Elise’s father, Francois de la Serre, told her about the true heritage of Arno, which was the allegiance for the Assassins’ Order. Francois then told Elise to train Arno in the ways of Templars.

This idea was against Elise and her Mother, Julie de la Serre. Julie and Elise managed to convince Francois to delay this plan to a further date.

Elise Was A Better Sword Fighter Than Arno.

Elise started her training at a very early age. The Templar Order member, Frederick Weatherall, was her sword mentor. Weatherall was the most trusted confidant for the la de Sierre family.

With Elise’s early training, her skills in sword fighting honed to the point where if she and Arno had a duel, she outclassed him. Elise’s other skills were also not far behind. She could use pistols in combat. She could also use her surroundings to her advantage, even the tiniest detail to track down her enemies.

Elise met the daughter of Edward Kenway and half-sister of Haytham Kenway. She entered Jennifer’s estate with the false identity of Yvonne Albertine to steal the letters of the Haytham.

Jennifer managed to learn the true origin of Elise and told her that the members of the Albertine family were dead. But Jennifer knew what Elise had come for and gave her the letters. After reading the letters, Elise learned that Haytham had a dream to make peace between Assassin Order and Templar Order. Before departing, Jennifer gave Elise a Templar Pendant given to her by his half-brother.

After returning to De La Sierre’s estate, Elise got inducted into the Templar Order. To honor her arrival and induction into the Order, her family held a Private Party.

During the party, she heard a commotion and cries. Getting to the commotion, she learned of her father’s assassination, and Arno was the culprit, as he had failed to deliver the letter, which contained the betrayal against her father. She hated Arno for the failure as well as her father’s death. After escaping from the prison, Arno met with Elise and told her that he was not the culprit, but Elise showed him the letter, which was his job to deliver to Francois, and he failed to do so. Later she learned the true culprit behind her father’s death, who was Francois-Thomas Germain.

After her hunt for Francois-Thomas Germain for her revenge and justice for her father, Elise finally confronted the killer in Temple. Temple was the secret headquarters for the Paris Templar Order.

During the fight between Arno and Germain, the latter traps Arno under a pillar with the power of the Piece-of-Eden but gets an injury from him. Elise uses this opportunity to kill Germain, but due to the instability of the Piece-of-Eden, it explodes, throwing her to the side and crushing her underneath a column, killing her in the process. After her death, the De La Serra family line ended as she had no children or siblings.

Also Read: Altair Facts from Assassin’s Creed That You May Not Know