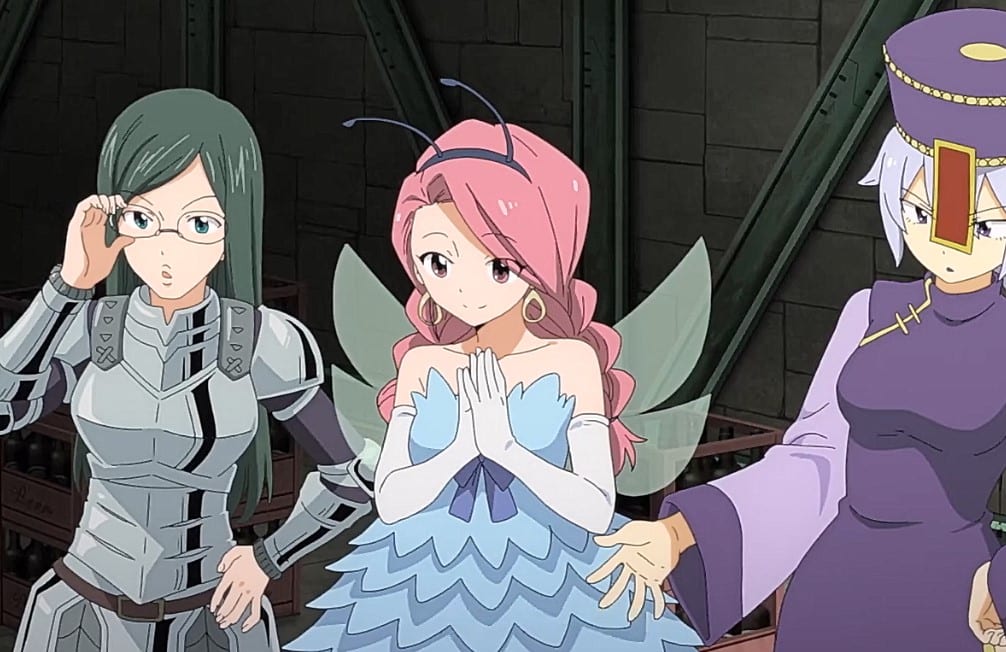 The grandson of the Demon King continues with his journey traveling around the world while saving his friends. Planet Guilst gets filled with chaos; everyone runs for their lives as Chronophage is about to strike the planet. Shiki’s crew has defeated Sister with the help of Sister Ivry. Jinn got his revenge after realizing that Sister was using them, and she stole the powers of Sister Ivry for evil deeds. Rebecca and Pino notice that they are in danger and wishes for Shiki to come in time. Meanwhile, Witch is riding Edens Zero heading to Planet Guilst to help Shiki save everyone.

The episode begins with Rebecca and Pino witnessing the citizens panicking. The episode title is ”New Company.” Pino comments that she is glad they were able to rescue Miss Copa. The two receive the message coming from Edens Zero that Master and the others will be joining them. Rebecca wonders who the others are, and Pino reveals Mister Weisz, Homura, and the real Sister. Miss Homura is the woman who came to assist in the rescue mission. Rebecca comments that the crew has made new friends without her.

The building begins to collapse, and Pino said the planet’s Ether is flowing in reverse. The mysterious tree begins to overgrow from the ground, and Rebecca falls inside the pit. Fortunately, Shiki arrives in time, diving inside the hole, and grabs Rebecca before she completely vanishes. Shiki uses that power of gravitational force and jumps outside the pit. Rebecca comments that he came to her rescue again, and Pino is excited that they won’t face any trouble. Shiki replies that Rebecca is his friend and rescuing her is nothing.

Homura, Weisz, and Sister Ivry arrives and Ivry scold the tree for destroyong Planet Guilst. Rebecca noticed the Sister that Pino had talked about, and Shiki smiles since Ivry is dressing like an old hag. Ivry comments that they will do an introduction later, and it is time for them to flee. The crew notices Edens Zero approaching to take them, and Witch Regret sends the message saying that the tree prevents them from landing. She asks the Great Demon King to get rid of the tree, and Weisz said they would blow the tree.

Weisz switches on his blazing gun, and Homura surprised everyone using Ether Gear Sword to slash the tree. Ivry realizes that she has seen tha sword before, and Homura uses Leopard Claw Frenzy to cut everything in front of her. Weisz uses Atlas Flame to burn everything in front of him. Ivry wonders where Weisz gets a flamethrower, and Pino is impressed by the skills of her crew. Shiki holds everyone and land inside Edens Zero using a path that they have cleared.

Weisz praises gravity powers, and Pino comments that they are falling towards Edens Zero. Homura said this is the Demon King’s power, and Ivry is impressed that Shiki has become a great warrior. Witch Regret announces that they are leaving Planet Guilst and orders Edens Zero to dash at full speed. The crew arrives in space, but many lives got lost during the incident, and 1200 years’ worth of time got consumed. That day is known as the day Planet Guilst got purified. Planet Guilst is a place brimming with money and greed, but it got restored after many years.

Xiaome reveals that to restore the true power of the battleship Edens Zero, the Four Shining star that once served Demon King Ziggy is required, the one who oversaw the ship’s defenses Witch Regret. Shiki and the other Sister will continue their adventure back to the past. Shiki, Rebecca, Weisz, Pino, and Ivry witnessed Chronophage eating Planet Guilst. Weisz said that Planet Norman got shallowed like Planet Guilst. Ivry also adds that they can’t do anything about the law of the Cosmos. Pino hopes that everyone has managed to escape.

Witch Regret tells everyone that the Chronophage ate 1200 years of Guilst’s time, and no one is left alive.  Ivry replies that they will see everyone if they wait for another 12000 years. The two reunites and realize that they spend so many years after the disappearance of Demon King Ziggy. Rebecca is glad to see Happy, and the two embrace each other. Rebecca thanks Shiki and the rest of the crew for saving her in time; Witch Regret said that Shiki also saved Sister Ivry. Later the team approaches Iron Hill, the colossus of the hero Orgia.

How Old is Kylie Minogue? Her Career & Achievements