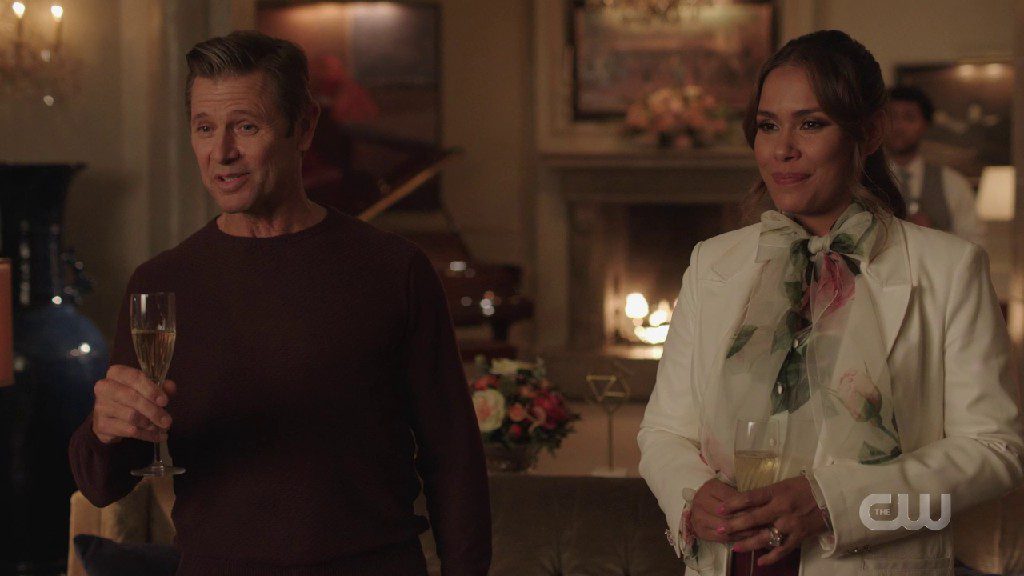 Dynasty Season 4 Episode 18 may mark the beginning of Amanda starting to fit into the Carrington family. But at the same time, not many are happy with the things that are going on this time. Blake on the other hand is relieved and moving on with his career but his kids are not at the moment. Recently on the show, Blake spent a fair share of his time trying to investigate Amanda. He took some help from Adam and his son successfully got his hands on one of her hairs for a DNA Test.

The DNA test turns out in the favor of Blake. Indeed there was a family expansion of Carrington. A family that has been in a mess for a while. First of all, we had Kirby returning. She had a lot more apologies on her back which she needs to get back to step by step. Apart from that, Fallon prioritizing her work over Liam had led to their relationship’s fall as well. So anyway, here is a breakdown of what happened on Dynasty Season 4 recently and what we can expect from the coming eighteenth episode as well.

Previously on Dynasty, we opened up with Fallon’s constant worry about the irregular stock activity. This leaves her and Liam’s intimate moments disrupted until Liam asks her out. Fallon has an urgent board meeting but she promises that they will spend tomorrow night together alone and it will be romantic. Kirby is back and welcomed by Sam but not by the rest of the family. This bugs her a little but she is happy everyone is acting normal. She tries to start her apology session after meeting Adam and a busy Fallon. But things don’t go exactly well.

Meanwhile, Amanda looking for Adam greets Blake and Crystal and apologizes for the mess at the conference. As Fallon and her company start investigating the man buying her stocks and it turns it, Collin. Blake tries to figure out if Amanda is his daughter or not by asking Adam to help. Michael spends time trying to recruit a bold Black individual for a show Andre is having at the club. Fallon makes her moves by buying stock from Collin but it was all his plan to manipulate her into doing this.

While Fallon tries to get her moves right, Michael’s plan to bring Colby to Andre’s podcast goes mess with Colby walking out. Colby later apologizes and fixes things for Michael. Alexi catches Blake and Adam trying to take Amanda’s DNA. As Alexis gives Amanda some history lesson, Kirby musters up the courage to apologize to Adam. Apart from that, Adam got the hair of Amanda and Blake could still figure it out, and turns out she is indeed his daughter.

The episode nears the end with Colin and Fallon trying to get one vote from one of the board members. But Fallon plays her moves and gets yes from the other members and becomes the chairman of Fallon Unlimited. In the process, her plans with Liam fall and she ends up going out with Collin in the end. Meanwhile, Eva wanted to give a file visits Liam and the connection on a photo of their together. The episode closes with Kirby apologized to the one man who cared about her, Sam and Blake announcing the expansion of family with Amanda. Liam ends going out with Eva for a and adventure trip.

Dynasty Season 4 Episode 18 is titled, “A Good Marriage in Every Sense”. The official synopsis of the episode says after figuring out if Amanda is his daughter or not, Blake will continue his focus on becoming the Senator. But the same news of family expansion hasn’t gone down great with other family members. This leads Fallon and Adam to team up and resort to help from an old friend. All this to figure out more about Amanda and her history. Lastly, we may see a tiff between Jeff and Dominique in the coming episode. That comes along with someone paying a surprise visit to Cristal.

Also Read: The Bachelor Australia: Where Are The Couples Now?