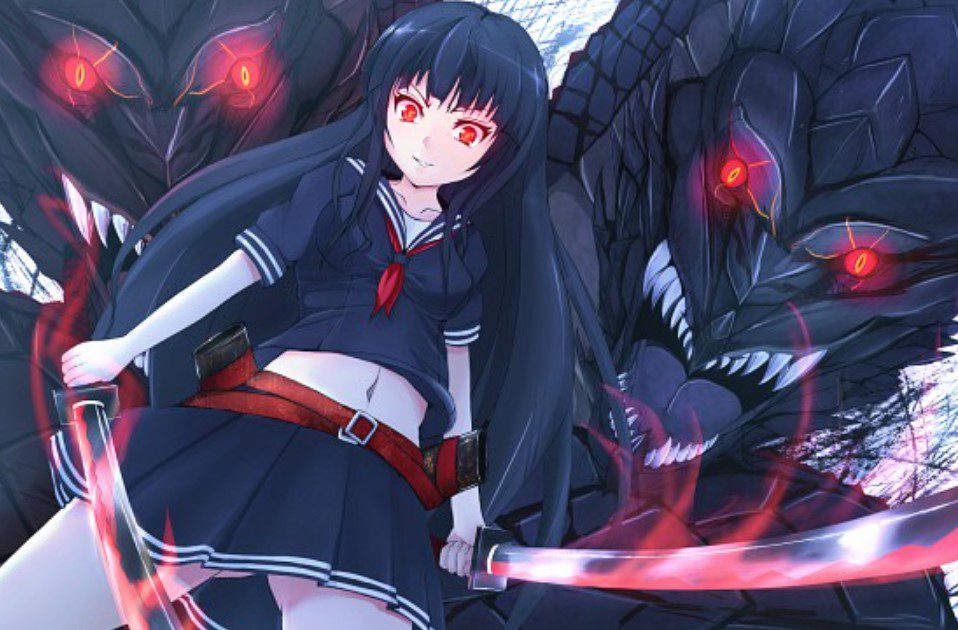 Dual Sword Users are mostly the anime’s main characters, and some resemble their names. However, the anime world has various duel sword users that hold more than one sword with other parts of the body and their hands. Like Zoro in One Piece, he also wields a sword using his mouth, making him hold three swords. But here, we will be focusing on those who use their hands to hold double weapons and many more about dual swords users in anime. Dual sword users are ranked according to the way they wield weapons.

Mostly they are introduced at the first arc of the story making an incredible appearance, then later, their childhood experience and how they wield their swords get explained as the story proceeds. Anime like Bleach, Naruto, One Piece, and many others had more than one dual sword user appearing from the different arc. Dual sword users are available in different animes throughout the year. As we speak now, some series introduce dual sword users from the beginning to the end. Anime fans might want to know about them.

Below we will talk about a few of them and their summary. We can also count on anime like Demon Slayer, Sword Art Online, Black Lagoon, and many more. The world of anime is so huge, and we have a lot of great anime that we can talk about all day long with dual sword users and not get to finish them. But this time, we will tone things down a bit and look at the elite of the elites in the anime industry. This means that we will be looking at top-rank dual sword users in anime that will make you want to rewatch their anime right away.

Asta is one of Black Clover’s characters who wield different swords while fighting demons and monsters. He is an expert Swordsman who first wields Anti Magic Swords. He can summon his swords from the grimoire for various offenses. His blades can cut magic, but they can be blunt if they strike anything else. 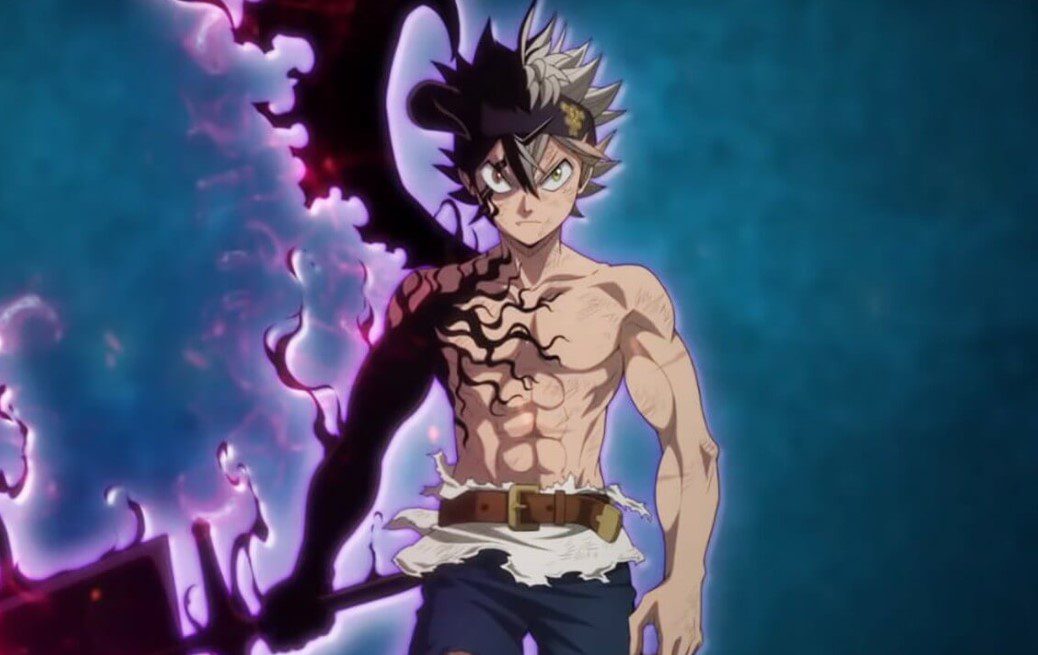 Demon-Slayer Sword is another sword that Asta summons and can be enlarged when he extends his Anti Magic from the edges. This blade helped him deflect spells, and he enhanced in six months of training in the Heart Kingdom. His training helped him to control Anti Magic within the sword. Asta can also call the sword’s name, and then it emerges from the grimoire.

Later on, Asta wielded the second blade known as Demon-Dweller Sword. Demon Dweller Sword releases slashes of Anti Magic. He uses it to cut spells and magic from a distance. This blade has a special feature to borrow magic from other Magic Knights around Asta. After borrowing magic, Asta can release slashes that hold other magic attributes’ properties. He is like Licht since he c possesses no man helping him to wield his sword.

No mages can use magic if they wield swords since their mana can get depleted. Demon-Destroyer Sword is Asta’s third sword. This sword has a Causality Break ability, which allows the sword to generate Anti Magic tendrils and negate Reincarnation Magic. Asta also wields Demon-Slasher Katana that belonged to Yami. During their fight with Dante, Yami gave Asta his Katana. After knocking Dante Demon-Slayer, Katana entered Asta’s grimoire. This became Asta’s fourth sword that can do the selective cutting, dealing slash that only causes damages and chooses what it wants to protect. Asta can swing his swords with a force that his enemies break stone when they crash.

Sesshomaru is another character that wields more than one sword, and they are known as Tessaiga and Tenseiga. He learned that he needed more swords other than his present demon sword, Tenseiga. Sesshomaru wishes to hall old absent-minded swordsmith to forge a new sword for him. Later he wields a sword known as Tokijin. This happened when he found the dead body of Goshinki. 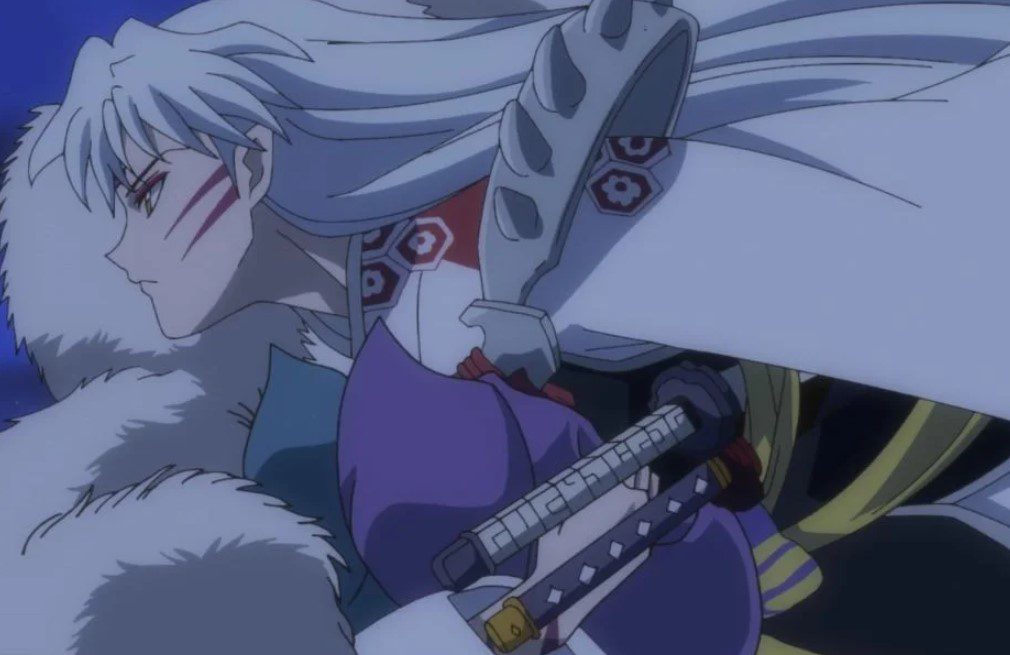 He felt Inuyasha’s scent on the corpse; Sesshomaru cut the Yokai’s head to Kaijinbo. The rogue wordsmith, Kaijinbo, and former disciple of Totosai helped Sesshomaru forge a new sword from Goshinki’s head. On that day, Kaijinbo arrived with a new sword known as Tokijin. Inuyasha transformed into a human form defenseless. But Totosai arrived and gave Inuyasha’s repaired sword back, but it was heavy for Inuyasha to wield.

Shunsui is another character of Bleach who appeared in various arcs. He wields Katen Kyokotsu, which is also known as two-sword zanpakuto. He has no trouble wielding those blades and can their sealed form in battle. 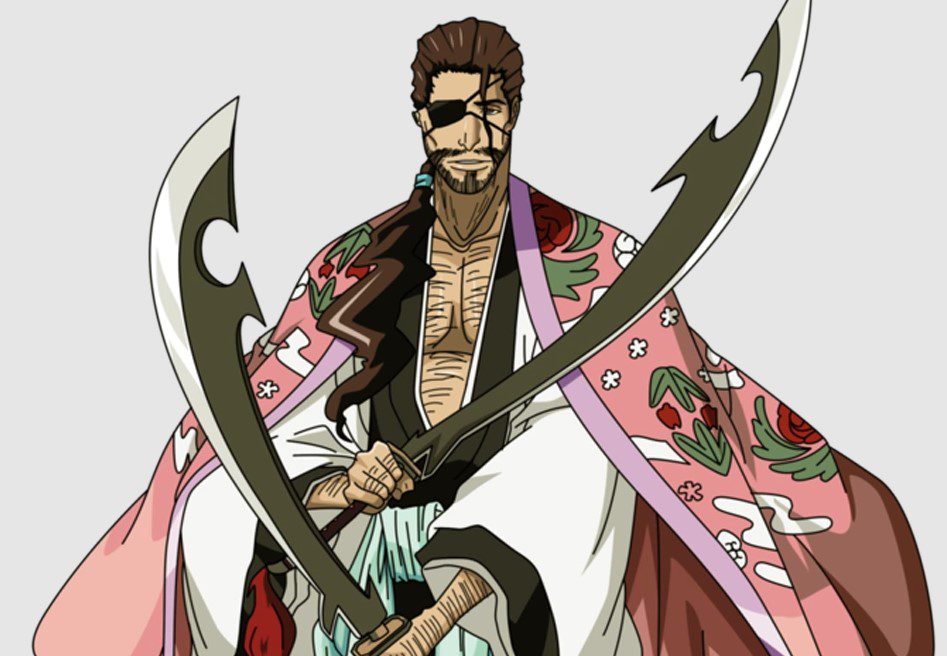 Shunsui is the best dual sword user and always uses them in battle and earned him the title of Master Swordsman. He does not hesitate during battle. He is a proficient swordsman in all of Soul Society. Shinsui’s two swords helped him become ambidextrous, letting him switch his swords between his hands. But he loves to swing using more strength with his left hand than his right.

But he balances or switches the strength between his hands. This allows him to make surprise attacks on his enemies. Shinsui believes that he can use his wakizashi when he can’t use his katana. But he never uses them together during battles, and he can even fight at grounds with an unreleased Starrk, the 1st Espada with sealed Zanpakuto.

Kei Tachikawa is an A-Rank captain who leads Tachikawa Squad. He is also the No. 1 Attacker in Border and 1st agent overall. Tachikawa was the antagonist of the Black Trigger Capture Arc. Later he became the supporting character who also holds two swords. He is a strong character and known for wielding 2 trigger swords with Koeigetsu Whirlwind. Koeigetsu Whirlwind appears when his two trigger swords release slashes. 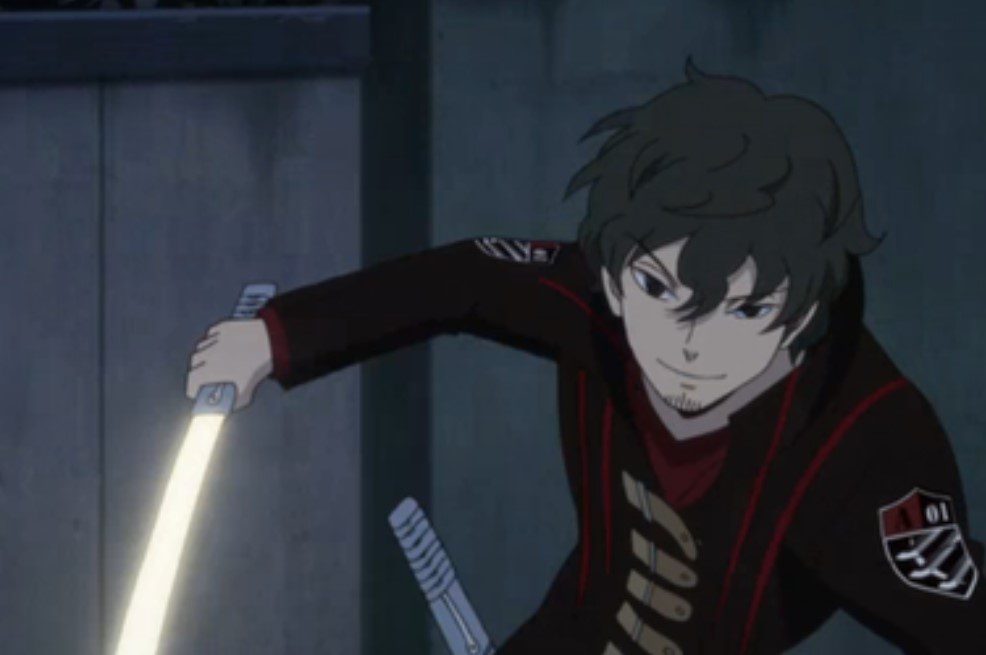 Wielding two trigger swords gave him an advantage during the battle, and he once clashed with Jin and other powerful squads like Tamakoma. His sword technique can take an enemy with a single blow. But his fellow fighter knows about that, and they are always ready to face him. Tachikawa uses two triggers on different occasions. He always improves after classing his trigger with enemies.

Magi From The Labyrinth Of Magic

Kouha Ren became Third Imperial Prince, but he was later retired from Kou Empire. Ren also worked as the General of the Kou Empire’s Western Subjugation Army. He was working with his brothers Kouen and Koumei. But he is the owner of the Djinn, Leraje. Ren became a Dungeon Capturer after he captured one Dungeon. He is also Judar’s King Vessels. The Kou Empire’s civil war ended a few years ago, and Ren was sentenced to be exiled by Hakuryuu. 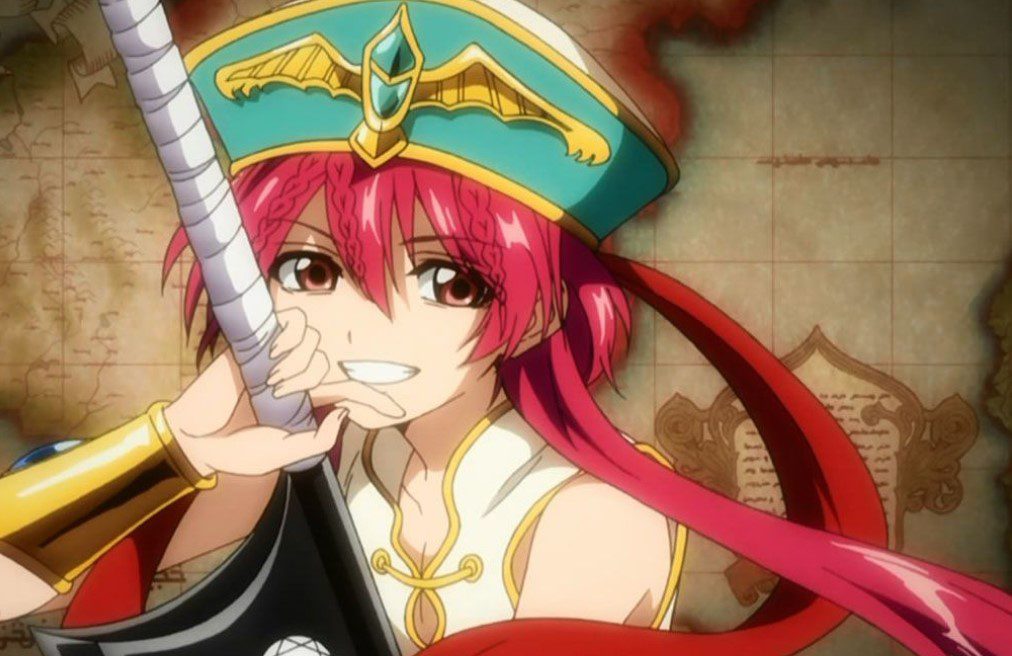 Kouen asks that since he knew that his brother’s life was in danger. But they show mercy and exile Ren, who now lives in Samon Island. The Island belonged to Kou Empire, and Ren’s brother later joined him. Ren is a skilled and talented swordsman. He possessed Metal Vessel, receiving Leraje after capturing the 14th Dungeon. His metal vessel is a giant sword that he always carries around. It gained powers from various  Strength Magic users that helped it recover its Magoi and strength.

Despite wedding Metal Vessel he also wields Nyoi Rentou, a “Refined Blade At-Will.”  Nyoi Rentou can cut anything and also changes its length. It becomes heavy and difficult for its wielder to use when it expands. But Ren uses his power to wield his swords when he needs them, even though they are big. He also had another sword in his possession known as Djinn Weapon Equip that becomes a scythe from one side and hammer on the other after it is released.

The Scythe side creates slashes that travel a long distance, and the Hammer side can apply great pressure to a region. This blade retains abilities to change sides at will. When Ren wields Djinn Equip, his hair grows longer and changes its color to light purple. Ren has pink spike hair, but they change when he wields different swords, and his hair also takes the shape of wings. During battle or when wielding his sword, he gained a third eye in the middle of his forehead.

His body also changes to hold the heavy swords while his arm and hair take the shape of armor. Ren loves to wear necklaces and arm bracelets in his arms. He loves a magic chant “Engrave her cruelty, disappear under queen’s crushing grief. Lelazzo Madraga is another sword that he carries, and it can blast anything that it touches. We have more upcoming anime that reveal dual users that will appear son on screens. These anime are available on the websites if one needs to learn more about dual sword users.

Thorfinn Karlsefni wields two mini blades, but he relies on agility and speed instead of brute strength to conquer his opponents and survive during the battle. He can attack in different directions using his double dagger to impale his foes. Thorfinn can also stop the enemies above his par with a single strike. Thorfinn enhances his two-dagger style during his childhood. He can release slashes using his daggers. Swords or blades are not the only weapons or steel that characters wield in anime. They also wield many different weapons at the same time. 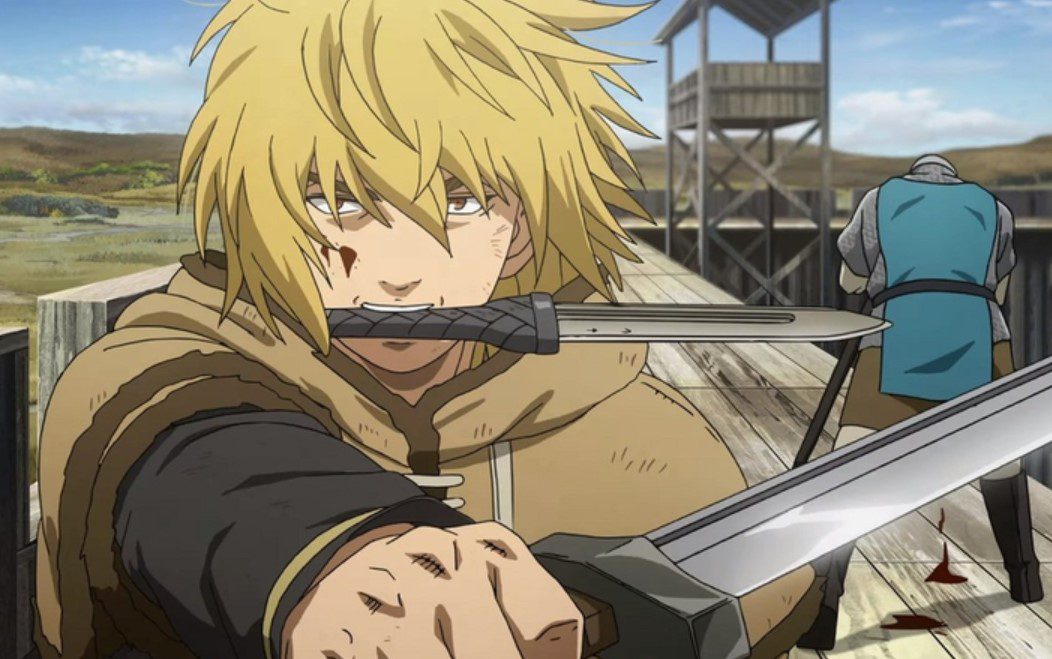 These anime dual sword users that we have explored seem formidable and difficult to stop. Things that are more interesting about anime, in general, is that comparing various dual sword users in terms of power dynamics makes it almost impossible. That is why most cross-overs focus on the ain characters appreciating each other and their differences. Most of them work together instead of clashing against each other. We have almost covered every aspect that we know so far.

Dual sword user has various abilities, and their powers power completely different. And what is possible within one world would be completely impossible in the other. What matters is that we all see how powerful dual sword users are in various dimensions and worlds. As we have witnessed, most indifferent animes are the most powerful characters in the anime world. The list is endless and still expands, but we always focus on the trending anime.