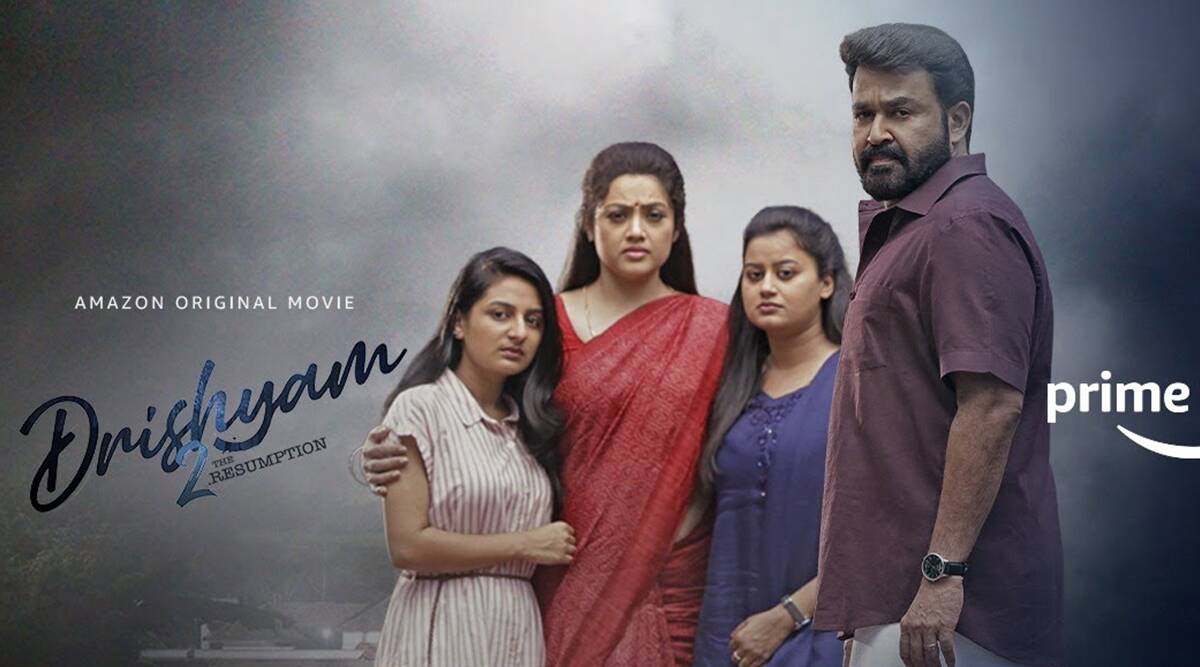 Drishyam 2, also known as Drishyam 2: The Resumption, is a 2021 Malayalam drama thriller. The film is directed by Jeethu Joseph, who has also written the screenplay. The movie is a sequel to the 2013 popular and critically acclaimed Drishyam. It stars Mohanlal, Meena, Ansiba Hassan, and Esther Anil, who reprise their roles as family members. The film follows the events that transpire after 6 years from those of the original.

The film has been released exclusively over OTT platforms. It was originally slated to release theatrically, which was altered due to the Covid-19 pandemic. It was eventually released on Prime Video on February 19, 2021. The film has largely garnered positive reviews. The general critical reception to the film notes the movie’s thrilling grip and twists and turns.

Drishyam 2 starts with Jose, who is a convict and is on the run from the police. While on the escapade, he discovers an under-construction police station. He takes refuge there and witnesses Georgekutty appearing out of place. Jose is eventually caught and arrested by the police. Six years have passed since that event, and now Georgekutty and his family lead a happy life. Georgekutty now owns a movie theatre and wishes to produce a film. His wishes are not so welcomed by the rest of the family. To develop the screenplay for his film, he stays in contact with a prominent screenwriter Vinayachandran. 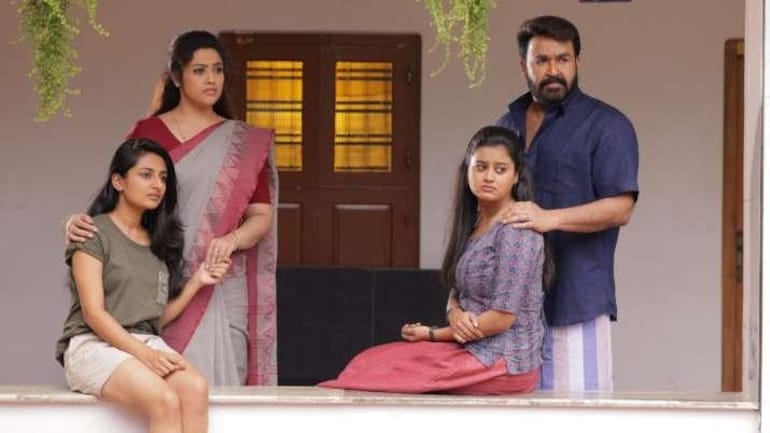 Drishyam 2 takes place after 6 years from the first one.

• The Father Review: A Painful Story About Dementia

Georgekutty’s family is leading an unperturbed life for the most part. However, every now and then, Anju has recurring epileptic fits. She is also suffering from PTSD, a consequence of her fears of getting arrested for Varun’s murder. Meanwhile, Georgekutty’s neighbors are becoming envious of his family’s increasing prosperity. Consequently, they start spreading rumors about the family and smearing their name and image. This is contributing much to Rani’s tensions. In such distressing times, Rani finds a friend in Saritha, whose abusive husband Sabu doesn’t approve of the friendship.

Elsewhere, the police are humiliated about their failure in cracking Varun’s case. Subsequently, the police decide to reopen the files on the case. The reinvestigation is being supervised by the IG Thomas Bastin. Later, we see Prabhakar encountering Georgekutty; he asks him about Varun’s body so that they can give him a proper funeral. However, his requests fall on deaf ears. Meanwhile, Anu is having a sleepover with her friends in the house. One night, Rani opens up to Saritha about her fears of getting apprehended. In the emotional exchange, she accidentally shares the fact that Georgekutty had moved Varun’s body. It is then revealed that Saritha and her husband Sabu are actually undercover cops masquerading as the family’s members. They are assigned the duty by Bastin himself.

Getting arrested and a twist.

Meanwhile, Jose is exempted from the prison. He has overheard about Georgekutty’s case from the people of the town. Having witnessed Georgekutty emerging from that police station six years ago, he shares that intel with the police. Bastin informs Geetha and Prabhakar of the developments, who then depart from the US to India. Following the lead gathered by Jose, the police carry out the excavation on the site. They eventually find a human skeleton. After that, Georgekutty and his family are apprehended and questioned by the police. Additionally, Saritha and Sabu have apparently bugged Georgekutty’s house, and Rani’s prior confessions to Saritha were recorded. Geetha questions the family, and it leads to Anju having another epileptic fit.

An overwrought Georgekutty fabricates a story and presents it to the police. He tells them that he’s the murderer of Varun and that he has the evidence to back his claim. After the family is let go, they contemplate the dark future that lays ahead. Later on, Georgekutty is formally arrested. Vinayachandran meets up with Bastin, Geetha, and Prabhakar. He informs them about the screenplay he and Georgekutty had been working on. He reveals that it was published as a novel titled Drishyam, under Vinayachandran’s name. The novel’s story has its protagonist successfully hiding a dead body but to protect his child; he gives a false confession to the police. Realization dawns over Bastin, and he finds out that Georgekutty’s confession matches that of the protagonist in Drishyam.

A conclusion rife with twists and turns

Over in court, Georgekutty pleads not guilty. His lawyer claims that the police had framed Georgekutty using the plot of the book Drishyam. What’s more is that the police, in a shocking twist, discover that the DNA procured by the excavated skeleton does not match up with Varun’s. A bewilders, Vinayachandran, reveals that Georgekutty had another climax in his mind for his film. In that climax, the protagonist learns about the procedure involving the excavation of a skeleton. He then produces another skeleton that resembles the buried one with the help of a local gravedigger. He also befriends the security guard of the medical institution where the skeleton is sent off to. He’d then switch the two skeletons, thus destroying all possible incriminating evidence. 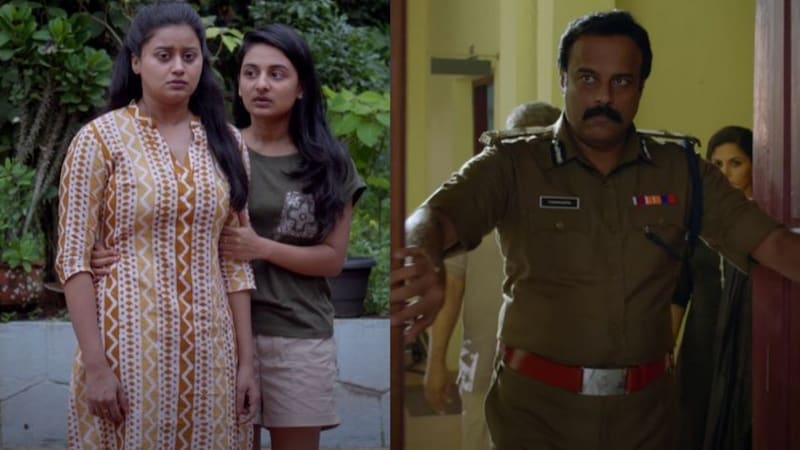 Drishyam 2 is packed full of twists and turns.

It becomes clear that Georgekutty had followed the original plot of the story. With no sufficient evidence against Georgekutty, he is released. The court is requested to order the police to stop their investigations against Georgekutty. Later on, Georgekutty secretly hands over Varun’s cremated skeleton to Geetha and Prabhakar. After they float the ashes into the river, Bastin requests them to end their spat with Georgekutty. He tells them that Georgekutty is already living a punishment – a life where he’s always on the lookout, bearing the guilt too. The couple agrees and depart. The film ends with Georgekutty observing them from a distance and then heading off.

Challenge of meeting expectations for Drishyam 2

Drishyam 2 had great expectations to match going in. The critical acclaim of the first one had to be matched and maintained. Suffice it to say, Drishyam 2 manages to meet those expectations. This sequel lives up to the bar its predecessor had set for it by providing a similarly intense and twisty thriller. The events of this film take place after 6 years from those of the first one. The protagonist, Georgekutty, yet again proves to be way ahead of the police. He is determined as ever to protect his child and his family. Much like events of the first one, Georgekutty outsmarts and outwits the police this time around also.

But the movie is riddled with flaws too. The over-reliance on the protagonist’s one-upping outsmarting skills can be overbearing sometimes. The film has an amazing twist, but sometimes the said twists also come with a fair share of conveniences. Apart from that, the film, like almost all Indian films, is packed with melodrama and loud background music. As Vinayachandran’s narration at the end blurts out exposition, certain aspects of the twist setups feel a bit too convenient and logically incoherent.

The custodial confession of Georgekutty also doesn’t make sense. Why was he, after admitting to murdering, not kept under custody? One would expect that a confession to murder would lead to the custody remaining intact. This does not happen in the movie. Another bit of contention I have with the film is what Bastin tells Geetha and Prabhakar at the end. He says that they won’t be able to get Georgekutty punished. This is a bit iffy since, following the revelations of Vinayachandran, the police could easily interrogate the security guard at the institution. 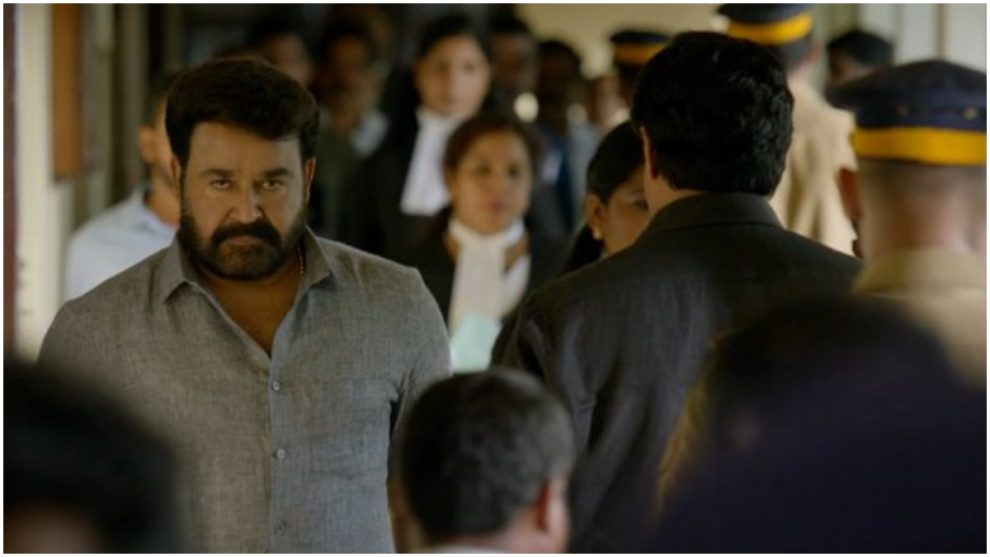 Drishyam 2 is flawed but ultimately succeeds as a sequel.

Other than that, the film does many things right and serves as an excellent sequel to the highly praised Drishyam. It’s a fairly difficult task to further build upon a case that has already been exhausted. The prequel had covered various aspects and concluded on a closed case. Jeethu tries his best to write and add to that story. Some might argue that a sequel to the story wasn’t needed, and they will not be wrong. However, if the film, despite its flaws, gives people something to chew on, it’s all fair play.