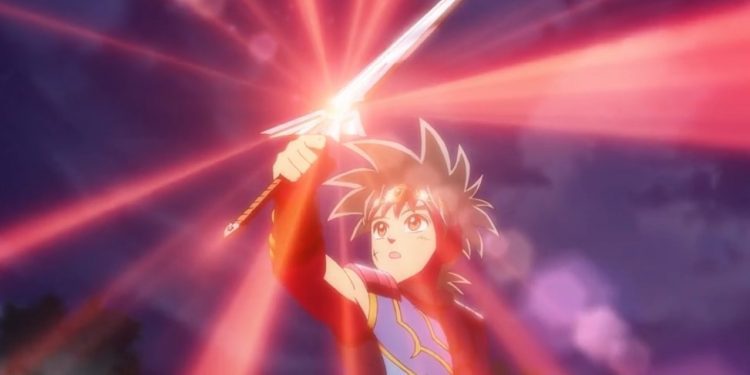 Dragon Quest: The Adventure-of-Dai Episode 65 returns after getting delayed. The Heroe’s party is on a mission to rescue Hyunckel and Crocodine from execution. Ron and Badduck have reunited with the Heroes’ party and give Dai a newly forged sword. They know that the battle will begin soon. Dragon Quest: The Adventure-of-Dai reveals the night before the battle. Dai wields his new blade and unleashes tremendous power. He is glad that he will wield the Sword of Dai again. Princess Leona realizes that Dai can use Draconic Aura and Sword of Dai because they are enhanced.

Lon told Dai to surpass his limits during the battle and about the secret of the scabbard. He gives him a note that he will memorize during the battle. Lon accepts that she will read it for Dai. Lon reveals that he has also enhanced the Dark Armor Spear, but he is disappointed that Hyunckel was captured. Later they had met and talked about the battle. Lon realizes that he understands why Hyunckel was captured. But he is impressed that the Heroes’ party still wants to invade Vearn Palace.

The Hero of North wonders who Lon is. Lon reveals that he has forged weapons for Dai’s subordinates, and it will help them make the fight easier. Budduck realizes that they came with a box that looks like a coffin, and he shows them that the weapons are inside there. They realize that they have to choose a weapon that suits their fighting style. Budduck took all the weapons out and put them on the table. He has a new Dark Amour Spear, a Gigantic Axe, and stuff that Popp would use. He didn’t reveal that since Popp was not present.

Gomechan signals Dai something, and Chiu reveals that Popp is in the forest. Dai believes that Popp must be training. Maam receives a Dark Armor Fist, and Lon tells her that it works better on Maam’s non-dominate hand. Budduck told Chiu that they also had a weapon for him. Chiu is glad to receive a new weapon from the craftsman of Underworld. Budduck reveals that the new weapon is Barbed Nunchaku. Flora wonders why Lon Beruk is helping humans since he once serves Dark King Vearn. Lon reveals that he was not on the Dark King’s side but played his role.

Lon admits that he forged the Staff of Edacity that became the strongest weapon in the world. But the weapon got enhanced because Dark King is powerful. Lon believes that helping the weak is better and interesting. Budduck told his party to rescue Crocodine, and Hyunckel then gave them their weapons. Chiu realizes that the Giant Axe belongs to Crocodine and wonders how to carry it since it is too heavy. But the Bear Ursula helped him. Popp continued with training, but he was worried about his powers.

Maam joins him in the forest. Popp realizes that he can’t tell Maam what he was thinking. Maam gives Popp stuff that belongs to Lon Beruk. But she noticed that Popp was bothered by something. She told him about Hyunckel and didn’t know how she felt about Hyunckel. Popp can’t believe that since he knows he likes her and scolds her about talking about love. Maam leaves, and Popp continues with the training. The Heroes’ party gets ready to head out for war in the morning. Nova disagreed with Lon. Dai wakes up and gets ready.

Dragon Quest Episode 65 will be released on 15 January 2022. Leona met with Dai, who told her about his mother. Dai was surprised to learn that Merle would join the battle. Leona reveals that Merle decided to fight since she can stay behind if the world ends. Dai asks about Mamm and Popp. Popp talks with Maam in the morning and apologizes for scolding her last night. Let’s look at Dragon Quest: The Adventure of Dai Episode 65 official details.