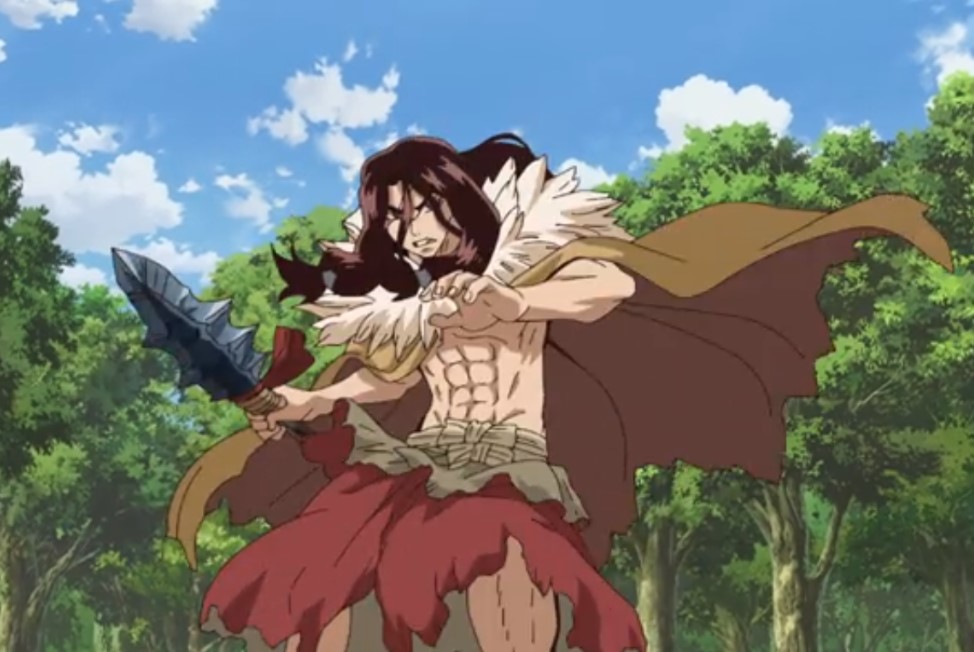 The battle between the Science Kingdom and Tsukasa Empire has begun. Ukyo was guarding for Tsukasa and Hyoga’s movement. The duo comeback and spear Ukyo, who has already warn Senku about them. Tsukasa and Hyoga challenge Senku. Senku refused to sacrifice himself and decided that he will battle using the power of his science with his crew. He heads to the miracle cave as the crew buys him time to do an experiment.

Kohaku clashes with Hyoga, and the rest try to stop Tsukasa from reaching the cave. Inside that cave, Senku is with Gen. They are making something that Senku will reveal later. He asks Gen to put snake poop and lizard inside the nitric acid. Senku realizes that something is missing to complete his experiment. He told Gen that they don’t have sulfuric acid. He asks Gen if he has it, and Gen said he can’t carry that dangerous thing.

Dr. Stone: Stone Wars Episode 10 will release on Thursday, 18 March 2021 at 10:30 PM on  Crunchyroll and Anime-Planet. Let’s move to the development of the battle below.

Chrome is guarding the path to the miracle cave, and he thinks about something. Senku and Gen are waiting for the miracle to complete their experiment. At the battlefield, Tsukasa dominated the Scince Kingdom. He is impressed by Ginro, Kinro, Nikki, and Magma’s move. He decided that he won’t kill them since they are powerful. They are worthy of being on his future army. He started to knock them one by one without killing them. 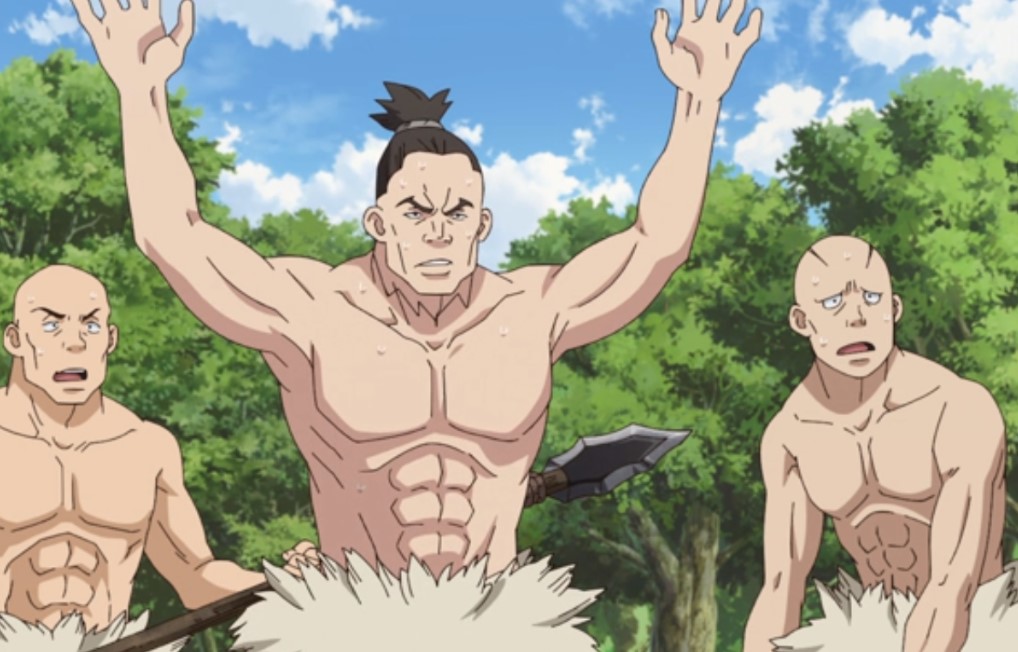 They both smash with trees, and Tsukasa’s allies are glad that he defeated Senku’s crew with ease. But Kohaku and Taiju are still on their feet. Kohaku exchange blows with Hyoga telling him about Senku’s wonderful science. She reveals that her name is not to defeat him. She is buying time for Senku to finish the experiment. Back at miracle cave, Senku puts a glycerine soap inside the nitric acid. He revealed that it is the first soap he shows Tsukasa.

In his first battle with Tsukasa, Senku uses soap to battle Tsukasa. He told Gen that their battle started with soap it will end with soap. Chrome manages to find the sulfuric acid that they were looking for. Gen asks where he found the sulfuric acid. Chrome reveals that it is the one that was left when they attack Tsukasa’s Empire to start the battle. Senku mix that sulfuric acid with nitric acid. He reveals that if everyone breathes, everything will be kaboom.

Gen asks if he is planning to blew everyone away, and Senku said no. Senku reveals that he has created Nitroglycerine. At the battlefield, Kohaku told Hyoga that she is getting a revenge battle. But her battle with Hyoga ended as a draw. Tsukasa heads to the miracle cave, and Taiju blocks his way. He told Tsukasa that no one would get in Senku’s way. Suddenly Tsukasa saw something flying above the sky.

The flying paper hits the trees, and everything started to explode. Senku, Gen, and Chrome get out of the miracle cave. Gen comments that they have won the battle. Tsukasa army threw their weapons away after looking at the damage caused by an explosion. Senku reveals that he has created a dynamite paper airplane. Tsukasa crew surrender realizing that dynamite is dangerous and they can be killed. 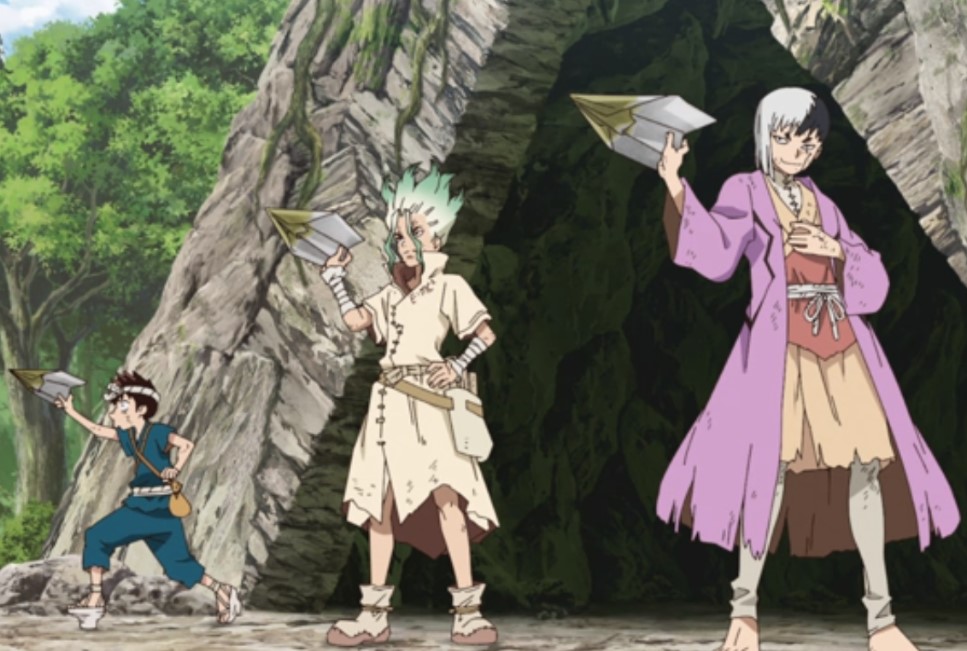 Hyoga was impressed by Senku’s science creation. Tsukasa realizes that Senku wants to negotiate; he is not looking for a battle. If he was looking for a battle, he would have blown everyone away. Tsukasa asks Senku to tell him his offer. Senku reveals that he wants a truce and reminds Tsukasa about his sister Mirai. Tsukasa realizes that he was fighting for his sister Mirai. Tsukasa was an MMA fighter who was fighting for Mirai’s life.

Mirai needs the money for her operation, but Tsukasa was poor. He decided to join MMA to make money for his sister. But everything was taken away in a blink of an eye. Senku promises Tsukasa that he will use the power of science to revive his sister. Tsukasa agrees, and the battle is now over with, and he is happy that he will see his sister again. They both head to where the hospital was located to find Mirai.

The crew is glad that the power of science has won the battle. They are impressed that Tsukasa is not a bad guy. He was doing everything for his sister. They arrive at the place where the hospital was located, and Tsukasa points where his sister was. Senku told everyone to start digging, looking for all the structure that was struck by light. The crew helps each other to dig. But Tsukasa manages to find the stone statue of his sister. He shed tears that his dream will come true.