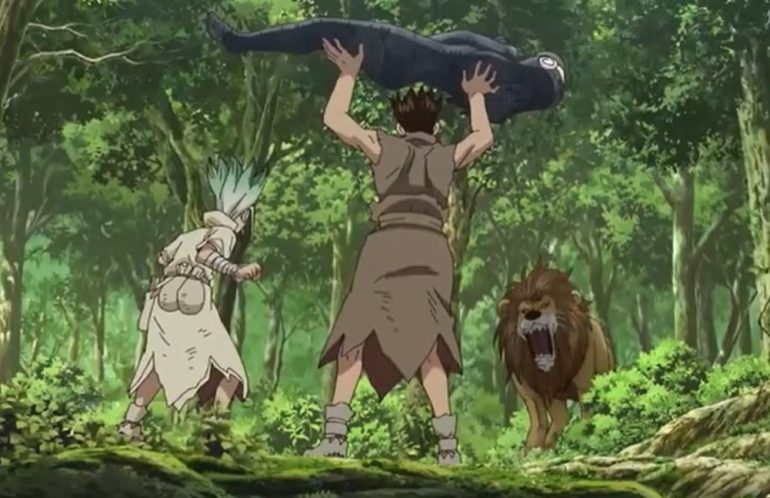 After a thousand years has passed a genius scientist has been awakened, he goes by the name Senku. Before weakening society was struck by a mysterious light leaves everyone petrified in stone and got lost. The genius scientist started to use his science to restore civilians and create his Kingdom of Science. Inside the stone world, he prepared for the upcoming war. From the latest development of Stone Wars, Ruri finds Senku working in the middle of the night.

Senku tells her to go back to sleep and she said that Kohaku was missing when she wakes up. Ruri reveals that Kohaku is warming something up and the battle against Tsukasa will start when the sun rises. Ruri asks Senku to revels the truth about what had happened between him and Tsukasa. Senku asks Ruri why she is bringing that topic. Ruri said that because the war between them will decide the future of this Stone World.

Dr. Stone: Stone Wars Season 2 Episode 1 will be released on Thursday, 14 January 2021, at 10:30 PM JST. Dr. Stones is available for streaming across different streaming official platforms you can stream it on AnimeLab, Crunchyroll, and Funimation. Let’s see how the battle inside the Stone world has started below.

Ruri adds that since she can’t fight she has to learn about the war and as a priestess, she can pass down the legend to the children. Senku smiles at her, saying that she makes it sound like a really big deal. He decided that he can explain everything that has happened between him and Tsukasa. Senku reveals that it all began with that light, in a second all humanity was turned to stones.

Everything was destroyed in a second but other humans got awakened inside the dungeon. After 3700 years later Senku wakes up standing on top of the tree. He met with Taiju who has just woken up and they started working together using science to revive every living creature. One day when the two were revving the bird they got chased by a lion. They end up getting corned near the Tsukasa statue.

They reincarnate Tsukasa using the revival fluid and he was the first one they did so. When the lions were going after Senku and Taiju’s throat Tsukasa suddenly wakes up and defeated them in a single punch. After putting the lions to sleep he comments that the two won’t be in danger again. Tsukasa said that he will be the one doing the fighting and the trio started training together.  Everyday Tsukasa and Taiju always spar and got involved in a fierce battle.

But Tsukasa always wins and Senku promises that he is going to use the power of science to rescue every single person. When the war between science and power began Tsukasa parted ways with Senku’s crew. Tsukasa notices that Senku was already thinking ahead of a future in which he’d use gunpowder to fight him. The two met and Tsukasa asks if he minds giving him the recipe for certification revival fluid.

Senku replies that the revival fluid is a compound of nitric acid and alcohol and Tsukasa asks if Senku will promise to abandon science for eternity. He promises that if Senku does that he won’t have to kill him. Semku said that he will never do that and Tsukasa uses his dagger and kill Senku then Taiju drag his body near the tree thinking that there is no way to revive Senku in this stone world with no medicine.

Taiju and Yuziriha try to save Senku. Taijju tries to think about what will Senku do in this situation and Yuzira saw that there is a little certification left on Senku’s neck. They poor revival fluid on Senku’s neck with a hope that it will work on him. The thunderstorm that was keeping them camouflaged vanishes and Senku wakes up. Senku comments that Taiju and Yiziriha get ten billion points.

Senku reveals that Tsukasa thinks that he is in the afterlife. But he knows where Tsukasa is and they will have a giant advantage in the upcoming battle. Senku sends the two to infiltrate Tsukasa Empire as spies. He raises his flag that they are going to build their kingdom of science. He also reveals how they meet Kohaku pinned under the tree after being defeated by Tsukasa. Senku saved her using science and Kohaku got impressed by Senku’s skills.

She was like that gentleman is a sorcerer who saved the lady and Kohaku decided that she will help Senku to fight that long black-haired man (Tsukasa). Senku said that’s why he is making a nation of science. He also said that he needs manpower and allies. Kohaku showed him where they can find allies and she went with him to her village. That is where Senku met with the likes of Ruri, Suika, Kaseki, Ginro, and others.

They work together a created a smart cellphone while Tsukasa prepares to battle Senku’s crew. Tsukasa told his allies that they must get ready since the battle is near. The battle will start when sunrise early in the morning.

With us here that what he has to offer for the upcoming Episode 1 of Stone Wars. Find out more next time about what will happen between Tsukasa and Senku’s battle.