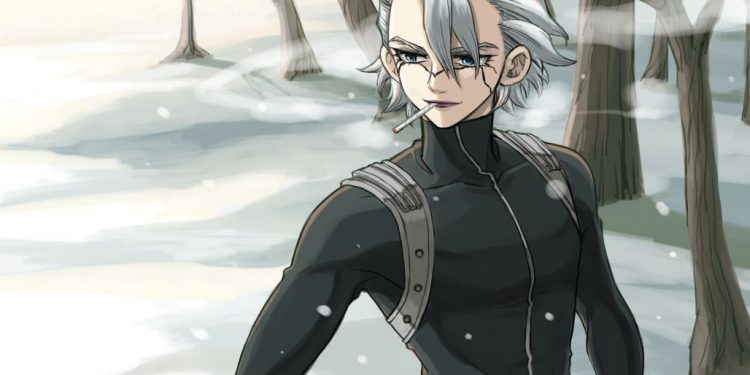 Senku, Kohaku, and Stanley’s departure to the moon begins in Dr. Stone Chapter 224. The trio has chosen after passing different moon tests. The Science of Kindom crew recently crafted all the scientific material for the trip to the moon. Senku, Kohaku, and Stanley get ready and put on a spacesuit since the rocket is ready to launch to the moon. Kohaku talks with Ruri before she set off to the moon. Dr. Stone reveals the Science of Kingdom crew preparing to set off to the moon, but only three heroes will go there. Senku and Xeno’s partnership pays off since they revive Stan, who didn’t hesitate to help them or cause them trouble.

In the recent chapter of Dr. Stone, the Science of Kingdom crew realizes that it is time for Senku, Kohaku, and Stanley to leave. Ruri tells Kohaku to return alive, and Chrome talks with Senku since he knows that it will take him another year to talk with Senku.  Dr. Xeno believes that the last showdown with ‘Why-Man’ will begin soon, but he never expects it sooner. Kohaku promised Ruri that she would return alive. Dr. Xeno talks with Stanley about combining his since and Stanley’s battle prowess to wage war.

Stan told Xeno reminds Xeno that it is not only about them. Xeno realizes that they have a big crew from Senku’s side, and the whole world is supporting them. He told Stan that smoking is prohibited inside the rocket. But Xeno gives him chewing tobacco cigarettes, and Stan accepts those chewing gums. Tsukasa and Kohaku talk about Kohaku’s martial arts skills. Kohaku also reminds him about Stanley’s marksmanship. He believes that Kohaku and Stan can handle space war as the ultimate fighting duo.

Ryusui smiled and knew that he should have been going instead of Stan, but he sacrificed since Stan is a sharp sniper. Senku’s crew knows that it is for the first time for Senku to get to the moon. Lana believes that Senku will come back to her no matter what happens. Carlos and Max get disappointed since they thought they had a chance when Senku is not around. They thought that Lana would focus on them, but Lana continued to talk about Senku. Senku knows that five percent of humankind failed to survive on the moon, but that would never affect them.

Suika thinks it’s a big party before the rocket launch and wonders what happens if the rocket fails and falls back. Gen is confident that nothing will go wrong while singing a song for three heroes leaving for the moon. He reminds them the space cadet will get petrified once they leave. If the launch fails, they can gather their body parts, put them together and revive them. Taiju supports that, but Senku is not interested in that idea since it starts from scratch. Taiju reminds Senku if they die Yuzuhara will fix them.

Senku told Taiju and Yuzuhara not to worry and work hard. He knows they might delay them since it is their last time talking face-to-face. Taiju told Senku he believed he would make it and give them moral support. Joel joins Kaseki and realizes that they have to fulfill that promised toast as fellow engineers of the Stone World. The two talk about science stuff and how they deal with batteries in the past. Senku, Kohaku, and Stanley arrive near the rocket and enter since they are about to leave the Earth.

Dr. Stone-Chapter 224 will be released on 3 January 2022. The Science of Kingdom crew looks at the sky and wonders what awaits Senku, Stan, and Kohaku on the moon. The countdown begins as the rock gets ready to launch, petrified. The countdown ends, and the rocket launches while leaving the Earth, and Senku thinks about the petrification of their world back to zero. Dr. Stone-Chppter 224 will return this coming Monday since it was delayed. Let’s look at Dr. Stone-Chapter 224 official details and other latest news.