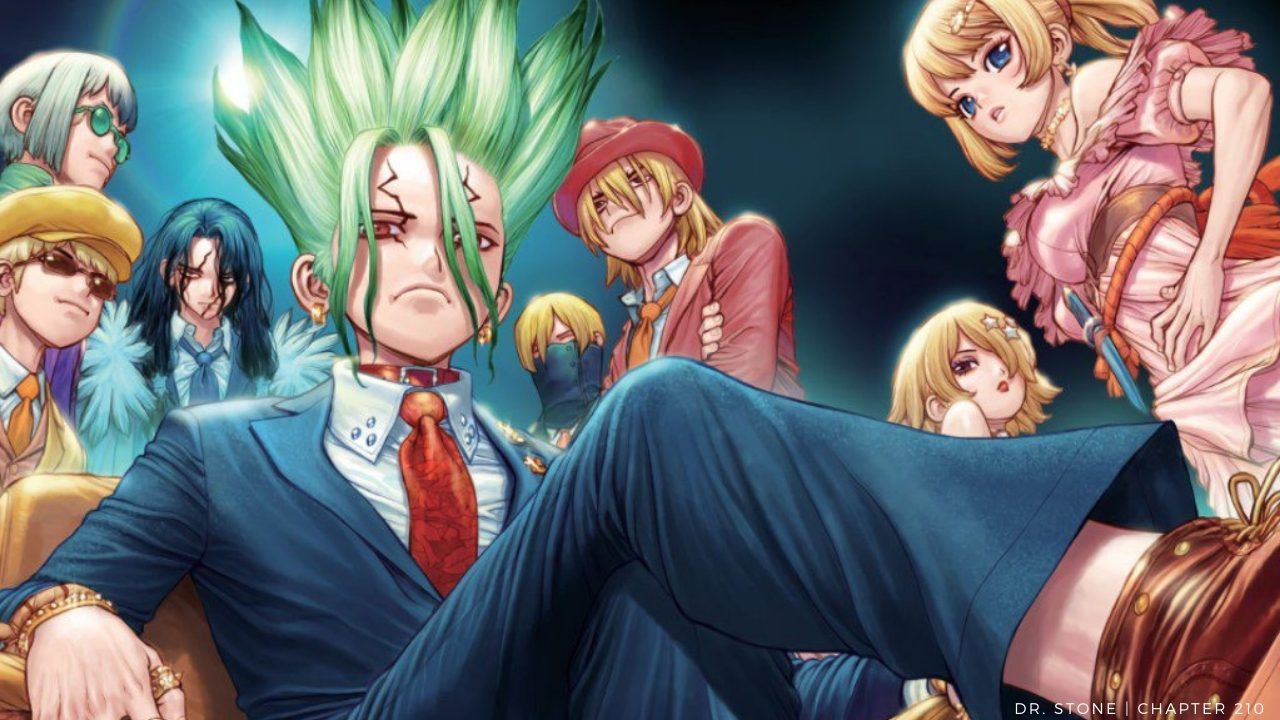 The journey of Science Kingdom Crew begins with Dr. Stone Chapter 210 with Senku and the group traveling around the world. Dr. Stone reveals the mysterious scientific creation by Senku and his team. This upcoming chapters will be released this coming Sunday. From the latest Dr. Stone chapter, Xeno and his team receive a task to make the engine, and Yuzuriha and her group are crafting the computer. Senku and the others begin to plan the moon mission while building the rocket ship. Kohaku thinks that the rocket is made out of Iron. The chapter title is ”The Rocket’s Hard Truth.”

Senku told her that Iron is too heavy for the trip to a moon, and Aliminium can launch into space since it is light. Ryuusui is steering the boat and release that they have left India, and their next destination is Australia, where they will begin to build the rocket. Senku talked about the Northern tip of Australia and the ingredients they will find there to produce Aluminium. The crew arrives at their destination and begins to look for the elements. Chrome is confident that he will collect more rocks than anyone.

He told the crew to get ready to witness Pro Geographer Chelsea vs. Pro Explorer Chrome. Chelsea thinks that it is not challenging, and Gen told her to take it. Chelsea replies that it doesn’t involve searching, and she managed to find the first rock. She reveals that the ground has Bauxite which is the source of Aluminum. Senku talks about digging the plain red rocks. Chelsea realizes that this place is the world’s best source of Aluminum. Ryusui comments that they will turn those stuff into Aluminum that will make the body of their rocket ship.

Ryusui reveals what he desires: a bucket wheel excavator. Gen is impressed by Ryusui’s desires. Ryusui is excited to get an ultra mining machine, and Kaseki realizes it is a brilliant idea. Gen thinks that Ryusui will use those for going to the shop. Ryusui replies that he enjoyed driving one at Nanami Corp. Gen wonders how many people they will need to dig and mining. Senku told them about Corn City’s productivity and the alcohol to make revival fluid. The crew from Corn City U.S.A arrives with a stunning boat. They ask the likes of Ksaseki if they need a corn delivery.

The team enjoys corn food, and Suika notices that Ukyo is in charge of the ship’s radar. She asks Yo why he is part of the trip. Yo looks at her and sees that she has grown up and is a cute girl. Yo wonders how little Suika grow into such a fine girl. Chrome enjoys eating cookies and tea, and Senku shows them a new battery slotted in a medusa device. Kaseki remembers his hard work making Diamond batteries, and he is glad that Joel made his hard work.

Senku reminds Kaseki that the device is the medusa from Treasure Island equipped with Kaseki’s batteries. They talked about different medusas and batteries. Ukyo notices that the Treasure Island medusa are new, and they are getting the job done. Senku realizes that they have a working medusa, which will be the key to their moon mission. He thinks that they don’t have to fight with him until they arrive at the moon. Ryusui realizes that the ones who join the moon mission won’t return to the Earth. Senku realizes that those going to the moon will be waiting to get rescued.

Dr. Stone-Chapter-210 will be released on Sunday, 12 September 2021. This manga will be available every Sunday with the release of the new chapter, but the latest chapters of Dr. Stone manga get delayed. The manga updates will get new chapter updates every week, even if the manga is on a weekly break. The spoilers of Dr. Stone release three days before the recent chapter releases. You can read Dr. Stone Chapter 210 online on Viz. Dr. Stone manga is available every Sunday.