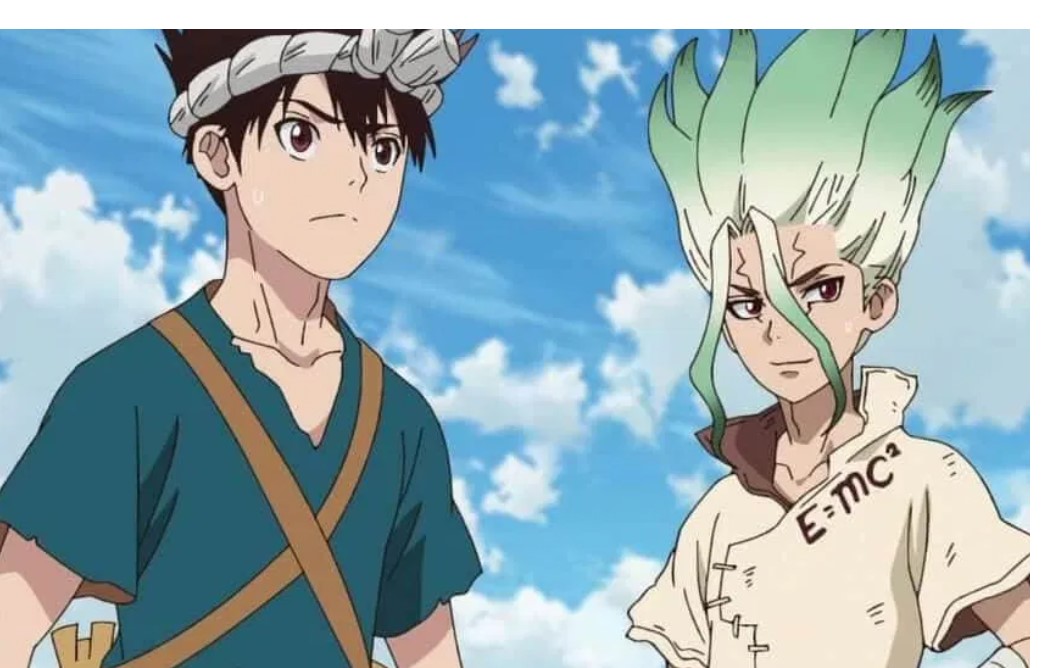 Stanley and his gang have arrived at Senku’s base they started to attack. They sniped out Ryusui and Taiju in front of Gen. The trio was trying to hold Stanley and the gang for Senku and others to finish with the devices. Gen took out the Scince Kingdom flag and waved it on air. Keep in mind that Dr. Stone will be taking a weekly break next week, don’t forget to check the schedule for more info. Today’s post will be about Scince Transcends Life. Senku shed tears looking at the destruction that Stanely has caused.

He is worried that all the diamonds have been burned up. Senku is with Saseki, and he regrets that he couldn’t do a thing about it. He thinks that he has let his crew down. The two realize that it is a shining star beyond their reach. Saseki and Senku think that they are finished, and they failed to take a single step towards the future. But Chrome surprised them and appeared carrying some of the materials. Chrome said he was not sure that their powers was enough, and he shows them Senku’s Phone.

Senku and Saseki are glad that there is still hope and Chrome talked about calling someone. He reveals about the call from their watch technician over in corn city North America. Senku said he could bet that it is professor Joel. While Joel has completed his task, and he is celebrating by drinking a glass of wine. Joel raises a glass of wine and comments that he has created a brand-new science beyond anything from the 21st century. The Petrification Device is acquired, and he said humanity owns this for all eternity. 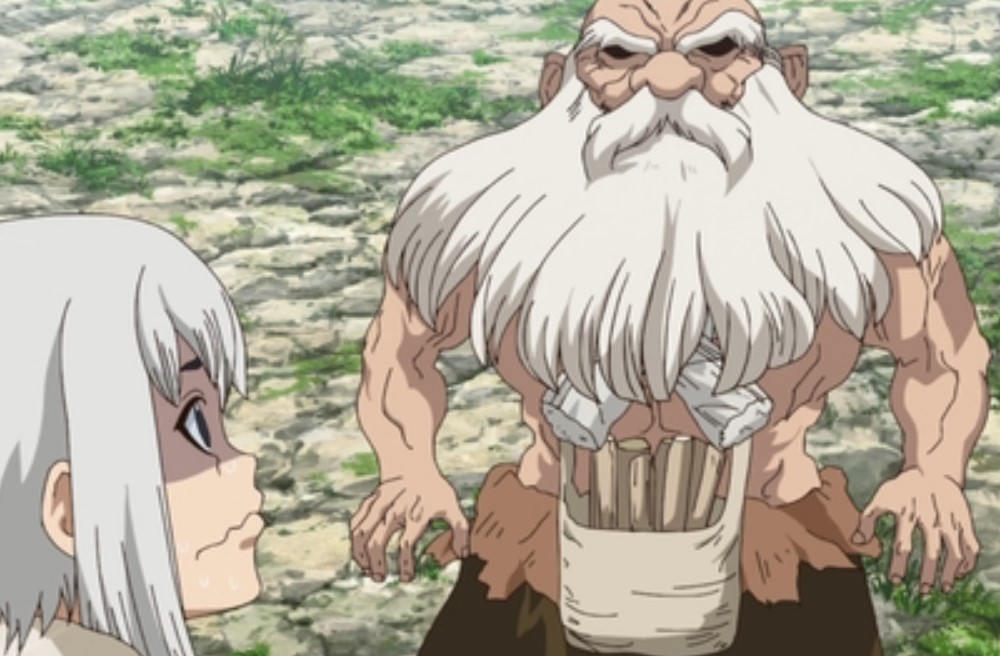 Joel realizes that earlier, Francois has sent the message that they have split into two teams. The message has reached the U.S base as a precaution. The U.S base thinks that the message is warning them about something. They think splitting into two teams is a code. The code might be saying not to allow the junior brigade science near the radio. Joel met with Kinro and the others they told him about the morse code via the wrist-watch. Joel reveals that it is for listening to Brody and their people.

The science crew realizes that the wrist-watch only receives signals like a wiretap. Joel explains the morse code. Joel asks Kinro about his crew from Japan and the craftsman. Kinro realizes that he is referring to Kaseki, and he explains. Joel started to work on the diamonds, and it splits into two. He reveals that the diamond batteries have a central cleavage plane that splits apart very easily. He is glad that Saseki has done a great job, and he decided to replicate them.

Joel comments that he will put his pride at stake as a master of jeweled timepieces. Saseki receives the news, and he is glad that all his effort and work didn’t go in vain. Saseki comments that he would have died today, but science finds a way to transcend their life. Scince has also found a way to build into the future. Meanwhile, Brody arrives where Jeol is, and he breaks everything since he suspects the code. He laughed at Jeol that he has found all about his plans. 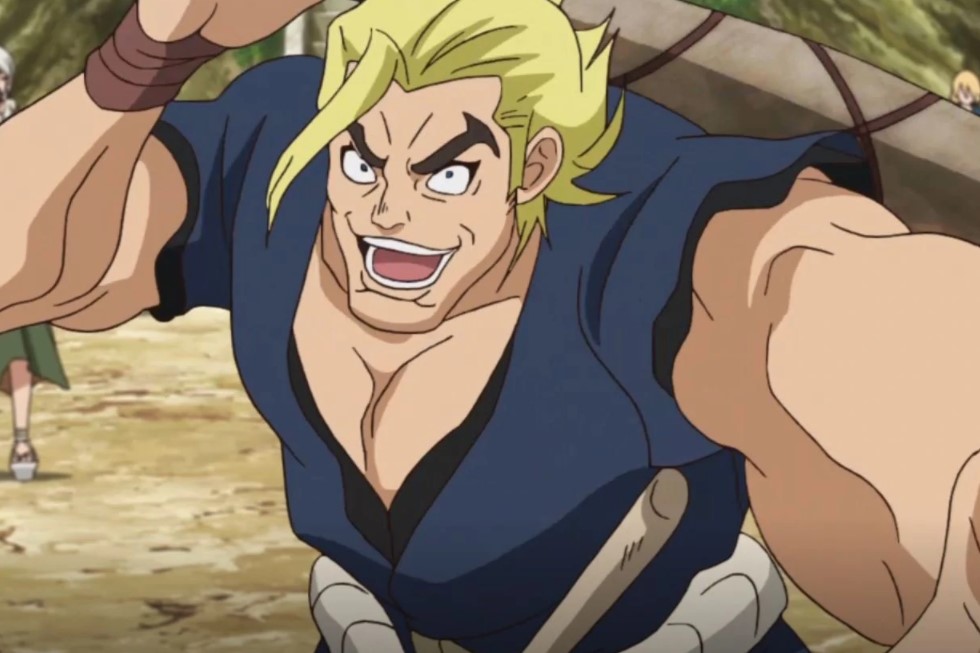 Brody took the wrist-watch and a glass of wine. He destroyed them and put them inside the fire. He comments that he cannot let Jeol possess such a dangerous weapon. Joel and his henchman point to Kinro, Homura, Magma, and the others with machine guns. Gen arrives where Senku, Chrome, and Saseki are. But he is worried that he didn’t get time to congratulate Joel. The communication was cut before he can talk with Joel. Gen reveals what has happened to Kohaku, Hyoga, and the transceiver.

The U.S base isn’t aware of the transceiver. They suddenly receive a message in Japanese, and Brody said they must not let the brats hear the message. Meanwhile, Senku and Gen are thinking about pulling out a risky plan. Senku comments that it is a do or die. The science screw that is in the U.S has also received the message. Joel has another watch hidden, and he asks someone to translate the message for him. He is worried that the communication might cut soon.

Joel told others that the message is about the crafting process. After a few moments, the Scince Kingdom at the U.S base decided to attack the armed crew. Magma comments that he was bored and he is tired of playing nice. He said it is a full-force suicidal attack. The U.S guys are scared, wondering why the science crew is not afraid of their machine guns. Joel comments that he won’t go without a toast of victory with Kaseki and Senku.

Dr. Stone Chapter 191 will release on Sunday, 4 April 2021. Dr. Stone will be on a weekly break next Sunday. We will always update you about Dr. Stone Chapters’ updates and spoilers. Read the recent updates of the battle at Senku’s base here on Dr. Stone, Chapter 190. Chapter 190 is released on Sunday. Visit Dr. Stone on  VIZ Media and Shueisha’s Manga to read it for free.