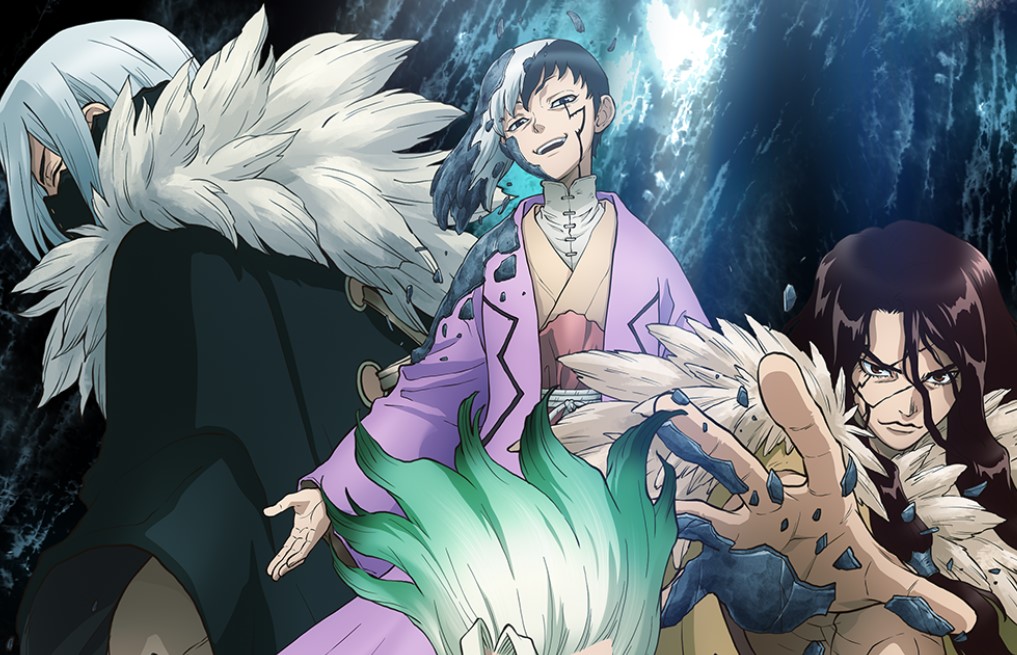 Maya and Stanley’s gang have spotted Kohaku, Hyoga, and Tsukasa. They decided not to go down without a fight. The trio realizes that their life is at stake since Stanley has armored soldiers. Their goal is to destroy the transceiver, and Kohaku comments that they have to lead Senku and everyone to victory. Dr. Stone won’t be taking a weekly break next week. Today’s chapter is titled ”What I Once Sought to Destroy.”

The trio started to exchange blows with Stanley’s soldiers. Kohaku realizes that they don’t have to be careless and show their blind spot to the enemies. She realizes that this final battle is different than the previous battles. Kohaku notices that Maya is rushing towards Tsukasa, and she warns him. Stanley’s gang is surprised after finding who Tsukasa is. They realize that he is the strongest man in history, and he is the MMA champ from Japan.

Maya wants to see the skills of the MMA guy, and she comments if it is that so. She thinks that the guys are bluffing about Tsukasa being a pro-MMA champ. Mya vows that she will kill the trio. She landed barrages punches that put Tsukasa on his knees. Tsukasa said no one has ever given him a tough battle like this. He told Maya that he is impressed by her strength. Tsukasa rolled his fist and landed a blow that sent Maya flying.

She got sent flying like she was hit by a bazooka, and the gangs’ comments that he is the monster. They can’t believe that Maya is beaten with a single punch since they know that no one can match Maya’s level. Tsukasa is showing Stanley’s gang the true power of an MMA champ. Suddenly, Tsukasa got sniped in his chest, and the guy who shot Tsukasa comments that no matter how strong he is, he has no chance against the machine gun. 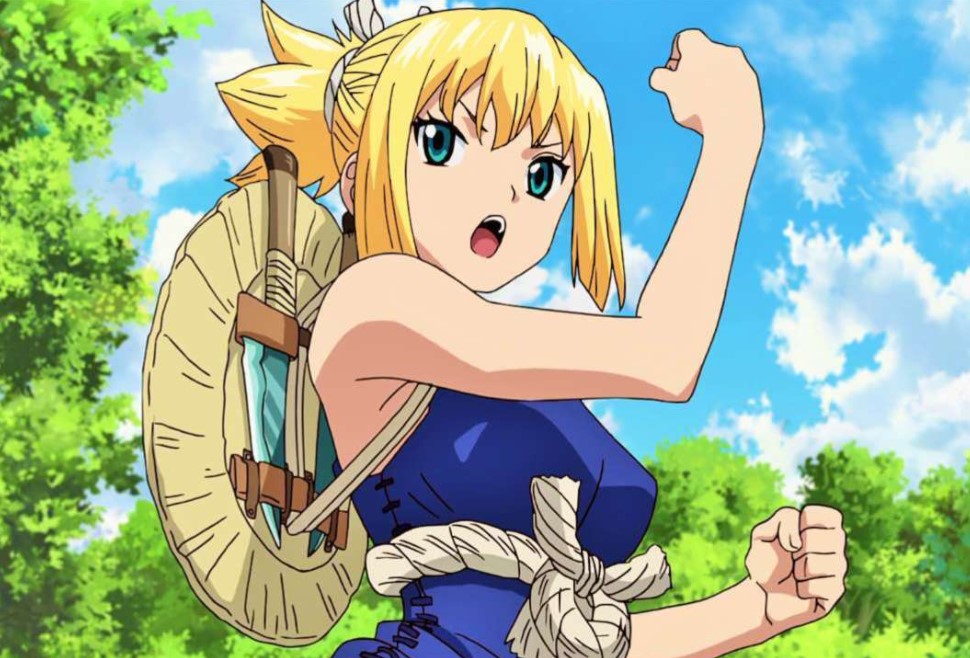 Kohaku notices that Tsukasa has been shot, and she yells his name. Hyoga and Kohaku started to punish Staley’s gang. They covered each other’s blind spot and started to cause a chaotic battle. The battle becomes heated, but Hyoga ends up getting sniped, and he stayed on his feet to protect Kohaku. He told Kohaku not to focus on him since they are on a mission. Kohaku realizes that their goal is to destroy the transceiver, and she rushed in.

Hyoga keeps the cover, and she took out her blade. Kohaku manages to cut the transceiver along with the guy who was carrying it on his back. The sniper realizes that the trio was not here for the batter. They were after the transceiver all along, and he praises that they did a good job. Kohaku shed tears, realizing that Hyoga and Tsukasa were part of her goal. But they got sniped, and Tsukasa is glad that the mission has been accomplished.

Tsukasa is lying on his back, looking at Hyoga, who has also fallen. He comments to himself that Hyoga has met his end. Tsukasa realizes Kohaku and he are left with little time. They can be taken out at any time, but he belive in Senku’s power of science. Tsukasa comments that if Senku and the Science Kingdom manage to recreate a working Medusa, they will be saved by the revival process. He realizes that the rival process has healed Mirai from her comatose site.

The Star of Hope 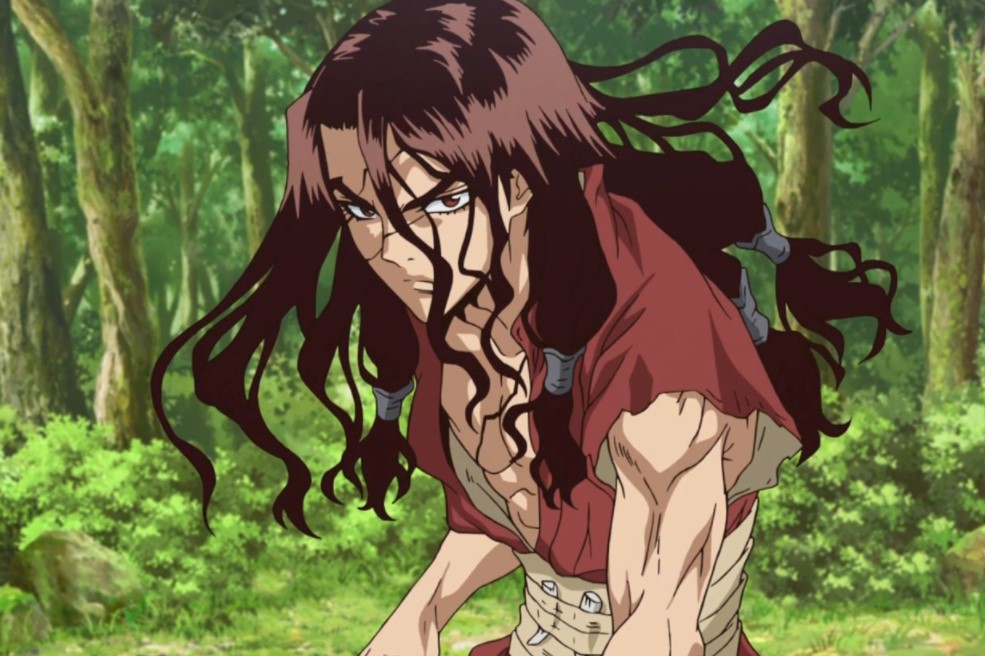 The process has also help Tsukasa awake from his cold sleep. Tsukasa is impressed by the power of the revival process that can resurrect the dead.  He realizes that he is beginning to trust and believe in the science of Sanku’s kingdom. Tsukasa looks at the sky and comments that what he once sought to destroy has become his star of hope. The man that he wanted to destroy in his pats will become his savior.

Tsuka is bleeding from his chest and nose thinking about Senku and the rest of the crew. He comments that he is leaving the rest to Senku and science. He is certain with one thin and that the victory will be easy since the transceiver is destroyed. Kohaku has not met her end yet, but a sniper still points her with a machine gun.

Senku and the rest are busy working on their surprise plan, waiting for Stanley to arrive with his gang. The fate of the Kingdom of Science is on Senku’s hands and the rest of the crew at Senku’s base. Next time, we will find out what Stanley will do with Kohaku and Tsukasa, who are about to die. Read Dr. Stone on VIZ Media and Shueisha’s Manga.