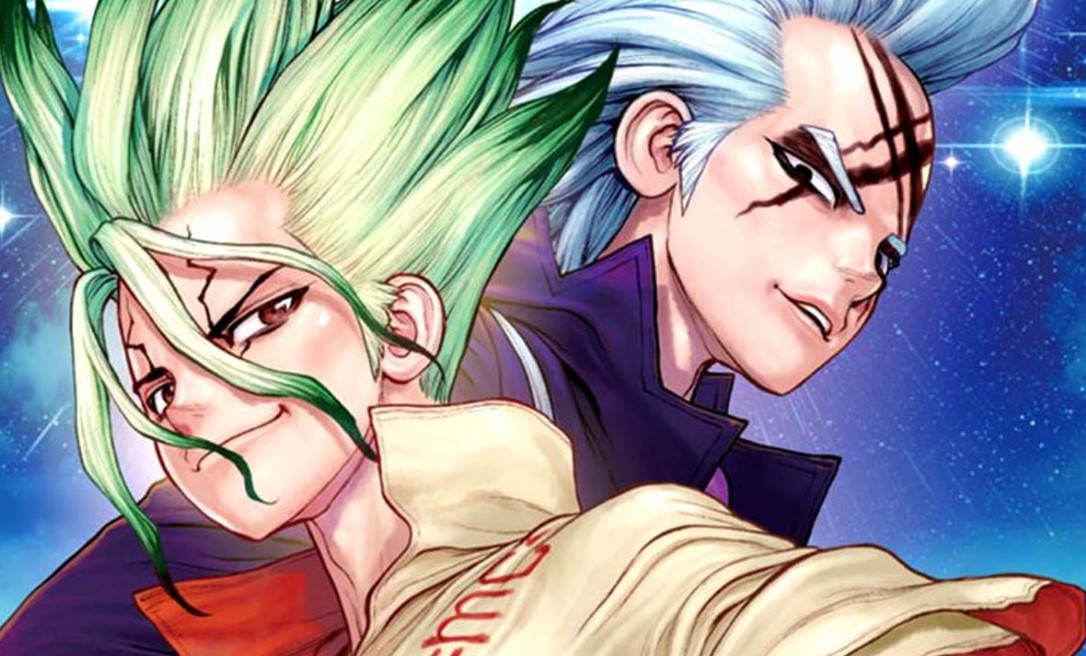 After slipping from Stanley’s, Senku along with his crew has arrived a the dense rain forest course. Stanley’s henchman is surprised how the scientist crew manages to escape from their hands. Stan comments that targeting them from the sky would have made the game to be more fun. Stan adds that even though they managed to get away they have just won the first half.

Ryusui thinks that since they have reached the Amazon they are untouchable and Stan will do nothing about it. There is no need for them to be afraid of his fighter’s plane. Stan’s henchman is glad that he can track Senku’s crew’s motorcycle’s trail. He reveals that chasing them from the sky gives them the advantage to spot their trails. Now they know the exact route to pursue them again and Stanley realizes that he now knows Senku’s escape route.

Dr. Stone Chapter 181 will be released on Sunday, 17 January 2020. Unfortunately, the spoilers of Dr. Stone Chapter 180 are not yet released. We will keep you updated as soon as they are released. A new chapter of Dr. Stone will be released every Sunday unless the weekly schedule shifts to Friday release. This manga is taking a break next week. Take a look at the recent development below.

Taiju adds that they just have to move at top speed heading to the mana place where Petri-Beam started from. Chelsea corrects Taiju that it is not mana it is Manaus. Ukyo tells Taiju that they are still moving across the Amazon Rain Forest. The scientist crew is racing at full speed with Senku and Gen leading the way.  Senku realizes that where they are there are killer bugs underground that can kill them in an instant.

Senku reveals that this is a place that no human has ever conquered and he is ten billion percent sure to die. Senku reveals that there are killing bugs like Parasitic Chingoe Flea, Giant Leech, and Bloodsucking Kissing bug. The scientist started to work on scientific crating with his crew. He used rubber and acquire rubber boots for everyone and the crew started to cross the river. They clash with dangerous animals and Hyoga uses his dagger to kill a python.

With the help of the rubber boots and weapons, the crew manages to cross to the other side. They started to party enjoying eating the meat of animals that they have hunted. Suika asks what Xeno is burning and Xeno replies that plant of Apiaceae and Artemisia genus. Xeno reveals that he is creating smoke that will chase away the dangerous insects. He also comments that he doesn’t want to be beaten by Amazo dangerous mosquitoes.

Chrome agrees with Xeno that bugs around here around dangerous. Senku started a quiz game and asks what is the strongest living thing in the Amazon Rain Forest. Taiju notices that Tsukasa is finishing the meat and points at him. He thinks that Tsukasa is the strongest living thing in Amazon and Kohaku smiles saying Taiju is right. Tsukasa keeps on gulping the meat alone saying that he doesn’t stand a chance around here.

Everyone looks at him finishing the meat while talking. An army of ants appears and Luna saw them which makes Senku realizes that he is referring to the army of ants. Chelsea and Senku laugh at the crew panicking after seeing ants. Chelsea uses a lid and collects them without fear and Senku comments that an army of ants can attack and reduce the beast to nothing but bones. Later Senku shows Taiju that they have turned ants into an alcoholic cock tale.

Kohaku hopes that the treasure they are looking for will be there and they must not return home empty-handed. Gen comments that it won’t be easy to search for the treasure. Meanwhile, Chrome is working on an automatic set time and thinks that it is just like the Medusa’s light. He talks with Senku about a machine to guard against the Petri-Beam and reminds him of the treasure island.

Senku started to wonder about the light from thousand years ago and thinks that there is more than one Medusa at the epicenter where it all began. He talked about a thousand years ago were the ominous light petrified everyone. He thinks that they are getting close since it has been months after leaving Japan to reach the other side of the planet. They reach the ground and started searching for their treasure while talking about Medusa.

You can read the latest chapters of  Dr. Stone Manga on VIZ Media and Shueisha’s Manga plus official platforms. Raw scans for new chapters are released 2-3 days before their respective chapters are published. We advise you to read the digital copies from their official websites and apps to support the Manga creators and publishers.