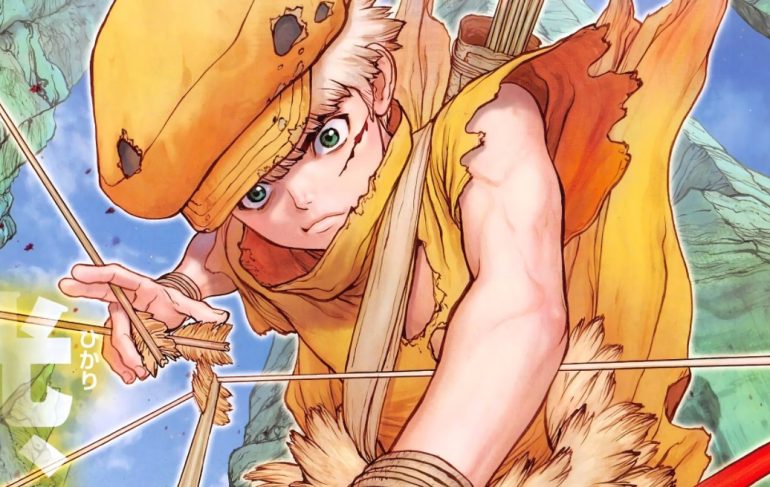 Chelsea notes down every detail that Ryusui has revealed. She makes a map of the area that Ryusi has revealed and Senku helps so that everyone can get the map. Yuzuriha, Minami, Magma, and one of Brody’s men then use the map heading to the remains of the airport. They met with the CEO, who send them famous Joel. Later they find Joel and revive Joel, who gets embarrassed by his nudity in front of the girls.

Minami is not impressed and Homura smiles at the stares. They reveal everything to him and then dress him allowing him to take apart the device. Joel discovers several things about the device, such as circuitry is glass or mineral-like, and the core is a diamond. He wrote everything down then removes and reinstalls the diamond, testing it on himself and becoming petrified. Let’s move to the following details below.

Senku and Chelsea are glad that they have managed to re-activate the petrification device by hand. Senku laughs that it is a total success meanwhile, Yuzriha pouring revival fluid inside the petrified Joel at the American Colony. It seems that Joel managed to squeeze one last activation out of the Petrification Weapon but now it’s fully stopped working. Joel intends to work on the hard work until he can’t work anymore to show off his strength in front of the other men.

In South America, Chelsea is glad that she will scale the mountain so that they will climb them. The crew discusses the terrain becomes more mountainous as they go further inland, and they discuss mountain ranges. They enjoy eating fried Armadillo. The Armadillo has an arrow on the side which shows that Ukyo is the one who shot it and kills it. Senku repeats their plan to find the original petrification device before Stanley can nab them. Francois said that everyone is fully fed enough for the long journey.

Hyoga suggests that they must do things quickly since Stanley’s plane might be completed anytime. If they don’t reach under the natural barrier of the Amazon’s jungle canopy they won’t be safe from it. Taiju asks how long it will take them to reach there. Chelsea trie to thinks deeply and reveals that the forest will be on the other side of the Andes. Max asks how Chelsea could possibly know that since they were not aware that the area they were in would be desert.

Chelsea decided to explain so that they will understand since the world they are in it has changed and it is not the same as before. Chelsea states that the changes are caused because of the lack of people, global temperatures decreased which made the Antarctic sea currents start flowing north. This in turn forces warm air to gather in the middle of the Pacific Ocean as cold air from the Arctic gets pulled southwards.

She reveals that the effect is called La Nin which also results in the new desert, as the colder seawater means less humidity and rain. With the mountain range blocking the effects of the ocean’s temperatures, the final effect is that Chelsea is confident that the other side holds the lush greenery of the Amazon. Chelsea asks Luna about how much she weighs. Luna didn’t give her the correct weight and said that she weighs 90lbs which is 40 kg.

Senku explains that they need to make the correct balance of the weight distribution on the bikes for maximum efficiency, since last time they left in a hurry the first time. Luna thinks that it will be a good chance for her to sit near Senku but Chelsea quickly jumps on and starts loudly whispering about her crush. Luna corrects her and says that they’re actually dating, disappointing Max and Carlos.

Luna remembers when Senku got shot and she tends to his wounds. Luna reveals that she asked Senku to become her boyfriend and Senku agrees thinking that it is some sort of a political marriage. Wich will be with the bonus of her two followers joining the Kingdom of Science. After telling her side of her story no believe that it is true that they are dating. While they are still talking Senku has finished making a scale for figuring out their weights and heights.

Based on his own height and taking 10 cm3 of water as 1 kg. They took the weight and measurements of everyone then placed them on different bikes. They ride and reach extremely steep roads which forces them to push the bike and advance forward. Meanwhile, Stanley reveals that the airplane’s repairs have been completed. They set off the plane with the American radar man flying it. Ukyo reveals that Stanley and his crew are about to come near them.

Kohaku asks if they have to toss the bikes and cargo and keep on climbing with nothing but their clothes on their back. Max thinks that they will be killed while climbing. Senku refuses while saying that they are not leaving anything behind. Senku announces that they will compete against that plane with a transport route born of science. A ropeway, Gen looks at the sky asking if they are making that now. Senku and others are using a ropeway to escape and Chelsea is excited that there are all types of vehicles across South America.

Read Dr. Stone Manga on VIZ Media and Shueisha’s Manga plus official platforms. Raw scans for new chapters are released 2-3 days before their respective chapters are published. To support the Manga creators and publishers, we advise you to read the digital copies from their official websites and apps.