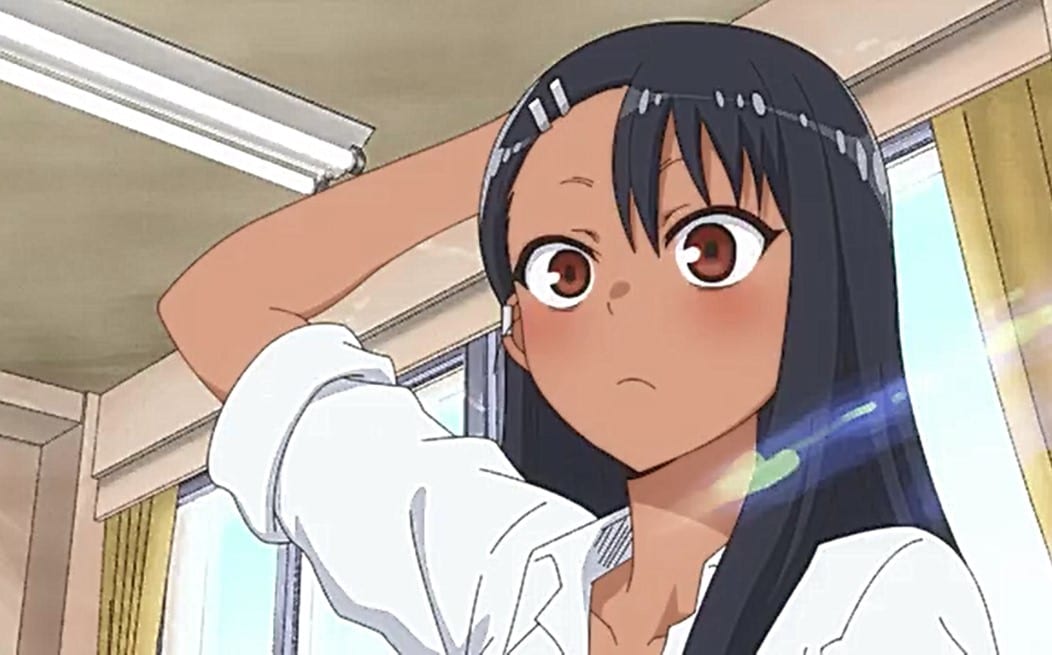 In the morning, Nagatoro visited Senpai, who was busy with his drawing. She asks him if she can model for him. Senpai replies that he does not draw normal people; he draws statues only. Nagatoro told him that she is going to make his day wonderful. Senpai jumps back, realizing that she is going to play with his manhood. She takes off her skirt, and Senpai closes his eyes as she takes off her t-shirt. She told him to looked and when he looks,s she reveals that she is wearing a swimsuit. Nagataro asks Senpai what he was expecting, and she calls him a pervy.

Senpai realizes that she got him again; he thought he was going to see her backed. He realizes that the heavens would have been opened for him if Nagatoro was not wearing a swimsuit. Later the rain started, and Senpai head home, but he decided to head to the restaurant to avoid Nagatoro. He realizes that he wants to have peace since when she is around, she will try to b more romantic with him like a person who wants to do it, but she is only teasing him. Senpai can’t believe that she is following him.

Previously on Don’t Toy With Me Miss Nagatoro Episode 3

Nagatoro manages to pass Senpai, and he saw her hips shaking. He wonders why this always has to happen with him. The rain is still pouring, and they are both drenched. They got tired of running, and Nagatoro finds a perfect spot for them to wait until the rain passes. While they wait, she teases him, and he tells her that he wouldn’t look. Nagatoro told Senpai that her uniform is wet, and he can see her body. Senpai comments that he won’t look back and he is not pervy.

Senpai realizes that she keeps on messing with him. He thinks that this time she might be wearing a swimsuit like earlier. He decides to look back and find that she was not wearing a swimsuit. Senpai saw everything and turns back quickly. He apologizes that he saw her body and Nagatora was shy. But she realizes that she has to say something to hide what has happened. Nagatoro comments that she knew Senpai was a closeted perv. The weather changes, and they realize that it is too cold.

They both head to Nagatoro’s place, but Senpai was not looking at her. When they arrive at Nagatoros place, Senpai saw two pairs of shoes. He thinks that they belong to Nagatoro’s parents. He wonders if they might tease him, but she told him that no one is home. Her whole family is going to be out late today. She told him to go and change. She gives the towel that she was using and her brother’s face. When he is changing, he smells the towel and realizes that it smells like Nagatoro. 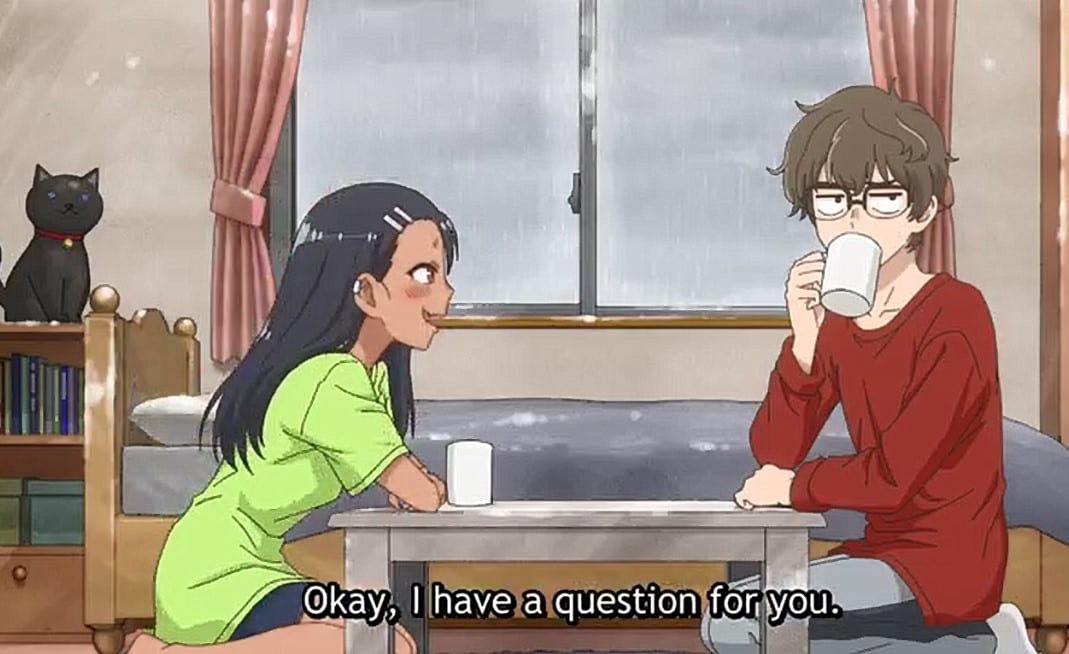 He realizes that she use the towel to wipe her body. Senpai thinks that using this towel is like touching a naked Nagatoro. Nagatoro came back and commented, too bad this is the towel I used. She showed him the towel that s carrying. Senpai realizes that she gave him her brother’s towel. Later they both head to Nagatoro’s room, and she asks him what a thing that a guy does when he is at the girl’s place is. Senpai replies that they read and chat.

Senpai told him that he could do it, and she told him to use his finger to play with it and touch it. Senpai pushes her and told her that they are not supposed to do this. Nagatoro shows him a game and said she is talking about this; she asks him what he was thinking about. Senpai realizes that she got him gain since he was thinking that they were going to do it. They both enjoy playing games and drinking coffee together. Senpai keeps on defeating her multiple times.

He decided to defeat her more as payback for toying with his feelings. But when they played the last round, she acts like she is kissing him and defeating him with a KO. Later she teased him and told him to smack her chest after doing that, they both look away, and Nagatoro wonders why he did it. She thought that he wouldn’t touch her chest.

Also, read about the One Piece Chapter Schedule For April/May 2021.