Takt Op Destiny is a video game adaptation, and not surprisingly not based on a manga!! 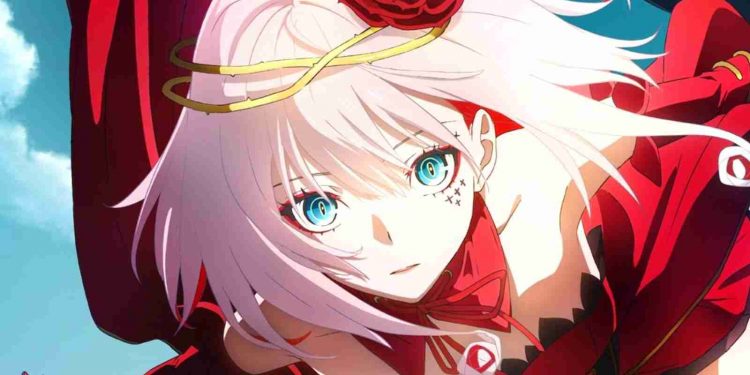 Did you watch Takt Op Destiny yet? Have you read its manga? More importantly, does Takt op Destiny have a manga? The amazing plot with the dazzling animation touched our otaku hearts! And have you wondered where the awesome graphics came from? Of course, it’s from MAPPA that’s on the rise these days, thanks to their masterpieces like JJK and AOT Season 4! Madhouse contributed as well, which has previously made one of the best anime yet, aka Hunter x Hunter!! Takt Op Destiny anime was directed by Yuki Ito and written by Kiyoko Yoshimura. It streamed from October to December on Netflix! Its video game which is developed by Game Studio, has been named “Takt Op. Unmei wa Akaki Senritsu no Machi o”.

The plot is based around the year 2047. The world was attacked by some dark forces and caused a meteor shower on earth. Some weird creatures called D2 emerged out of these meteors and started to hurt people. This black meteor had something called the Black Night Siderites, which can be produced D2, the monsters that can demolish the earth. The only way to destroy them is by a Musicart and conductor pair. D2s dislike the music and are easily drawn to the music source. To fight the D2s, the musicians join the Symphonica International Organization, where the Musicarts combine their powers to defend the cities from D2s.

Does Takt op Destiny have a manga?

No, Takt op Destiny doesn’t have a manga. It is a re-adaptation of a video game. It is a smartphone game made by DeNA and Bandai Namco. It includes a TV anime and game for smartphones. Both are classical music-themed and bishojo (which means it has a cute anime girl) RPG (a roleplaying game where the player is represented by a fictional character). It’ll be released in 2022. Some people have pre-registered to play this game as well. It can be played on Android phones as well as iPhones.

The plot of the anime is nothing new, but it’s based in the US. The D2s have made the world a living hell. The story takes place in a rather dystopian world. Some young girls have turned into Musicarts, who are pieces of pure classical music. Their conductors can guide them just like a conductor leads and directs the music of an orchestra.

This is the story of Takt Asahina, who is very passionate about music. He lost his father to one of the D2, and he started living with the Schneider sisters. He started to prefer living alone in the basement. His only human contact was Cosette, who used to come to talk to him. He felt annoyed by her arrival, but they enjoyed each other’s company during an open concert, where Cosette convinced him to finally play in an open piano concert.

Suddenly D2s attacked while he was playing the piano. Cosette came in front of Takt and died on the spot. Her necklace started shining brightly, and she transitioned into a musicart called Destiny that sucked Takt’s life energy. He lost his right arm in the process. When he woke up after a few days, he was shocked to realize that Destiny was residing in Cosette’s body, and he had turned into Destiny’s conductor. She started to call him Maestro. It was as if Cosette had completely disappeared from the body.

Does Takt Op have a happy ending?

Anna Schneider panicked while another pair of musicarts came to their place and told them about the dynamics of a Musicart and a Conductor. They told Takt, Anna, and Destiny, how Musicarts were usually created in scientific labs, and it was a miracle that a human turned into a Musicart by themself. Musicarts and Conductors had an agency called Symphonica Headquartmangaers in New York City. By reaching there, they would be able to find the secrets of D2 and learn more about Destiny. Lenny and Titan, the Conductor-Musicart pair, taught Takt and Destiny how to fight, but due to Takt’s lousiness and Destiny’s workaholic impulsive need to kill D2s, they often ended up using more power instead of coordinating. This often led to both of them fainting on the battleground.

They started their journey to New York with Anna at the wheels. They met with a lot of D2s and even more challenges on the path, but little by little, they started to coordinate. It was evident that Takt and Cosette had chemistry, and now it was somehow returning back, perhaps because of their similar motives to eradicate D2 and all the black meteorites from the earth. At the very end, after a whole lot of twists and turns, they find out that one of the good guys, aka a Conductor, lost his hope and started perceiving things so negative as if it’d be better if humanity was eradicated.

Takt and Destiny save the day, but Takt’s life energy depletes rapidly while his hair turns half white. In the very end, Destiny sweetly lies on the beach with Takt, and he slowly drifts to sleep. For the first time, a tear escapes her eyes when she kisses him and disappears into nothing. Later on, Takt is rescued and admitted to the hospital. That’s where the season ends.